Our church practices what’s known as “believer’s baptism” and every year at our annual church picnic a number of people are baptized. This year, John decided to be one of them. He grew up in the Catholic tradition and was therefore baptized as an infant. I grew up Methodist, so was also baptized as an infant, but did a believer’s baptism at a Baptist church I attended in high school. (It’s not that we’re church hoppers, it’s just that God has taken us through many paths on our way to the one we are currently traveling.)

I was excited for him but I really didn’t think I’d be so emotional. Pastor Anthony told me afterwards that he thought they’d have to come down and help me, but I made it through. Before each baptism the pastors spend some time talking to the person who is going to be baptized. I’ve always wondered what it is they talk about. Is it deeply spiritual, are they just telling them to plug their noses, what? So, I asked John what it was they were saying. No kidding, this is what he told me. “I told them that I’d always planned to be baptized by Billy Graham in the Jordan River but I finally decided that wasn’t going to happen.” Where does he come up with this stuff?

In addition to the baptism, the whole picnic was a blast. Great food, perfect weather, and I got to hang out with some of my most favorite people in the world. 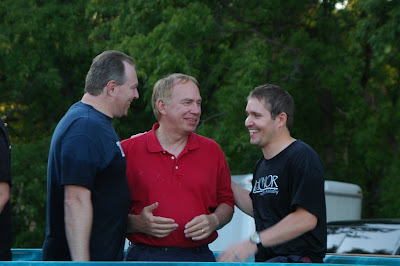 John is apparently cracking jokes with the pastors before his baptism. 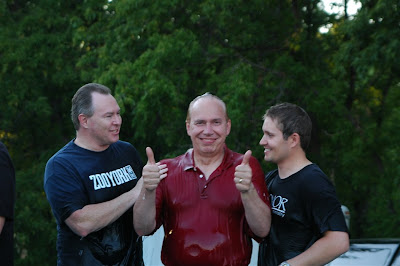 All smiles with Pastor Anthony Richards and Pastor Justin Mack.