Driving from Boston to Cape Cod took us right past Plymouth, where the famous Plymouth Rock stands. Plymouth Rock is supposedly where the pilgrims, who came over on the Mayflower, first stepped foot in the New Land. Of course, the rock has been moved a couple of times, dropped at least once, and is now a little bitty boulder by comparison to what it once was. And, according to some people, the pilgrims really landed in Provincetown, which is across the bay from Plymouth.
I had been warned not to bother stopping as it is, after all, just a rock, but it was lunchtime and we were there so why not take a peek? It seems we picked a bad time. At some point in time a portico was built over and around the rock, I believe to protect what is left of it, and the government picked this summer to do repair work on it. So, our view of Plymouth Rock was through a piece of plastic, with scaffolding all around it. Wouldn’t you know? I actually think our view was more fun. At least it was more unique. 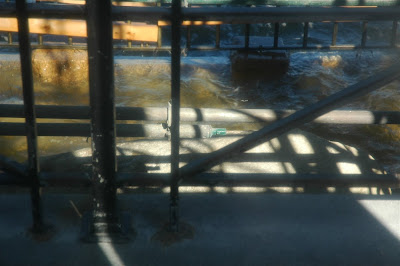 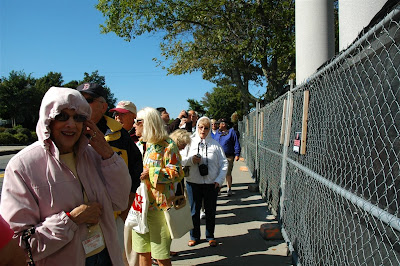 This is the line of people waiting to view Plymouth Rock. Once people saw it they just walked away shaking their heads saying, “you don’t want to miss that.” 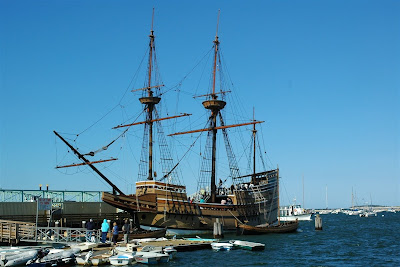 A replica of the Mayflower given as a gift to the US from England in the 1950’s. This is NOT a Holland America Cruise ship! 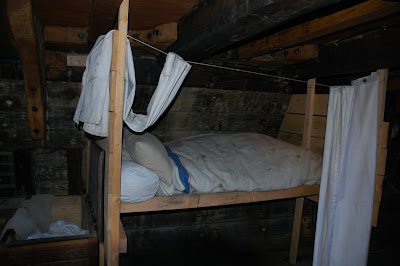 I would have made a lousy pilgrim. They say there were over 100 people on this ship. I think it’s smaller than the combination of my living and dining room. Granted I have a rather larger living and dining room but I’ve had, at one time, about 50 people in there and we could hardly move! How bad must your life be to sign on for this trip? Yet, there were people of all ages and genders, two women gave birth, and many were sick and dying. You wouldn’t have had to throw me overboard. I would have willingly jumped!