My friend, Debbie, and I decided to cash in some frequent flyer miles to take a trip to Cape Cod. Being as this is our first time to the northeast we decided that we should see some of the historic sites of Boston while we are here. We arrived on Tuesday afternoon and decided a trip to Harvard would be the perfect thing to do until our luggage decided to join us on our adventure. We headed out using the amazingly well organized Boston subway system called the “T”. We had to ask several people for directions along the way but everyone was really nice and very helpful. Wait, haven’t I always heard about how rude people are on the east coast? There goes another stereotype out the window.
I can’t explain why, but it was just very fun to see the Harvard campus. I have to say that I was a tad bit disappointed. Aren’t the buildings supposed to be covered in ivy? Or is that Yale? We only found one side of one building covered with ivy. What’s up with that? But, otherwise it looked just as I thought it would. One of the buildings was built in the 1600’s. That is just impossible to fathom! 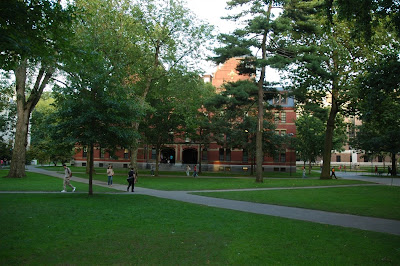 Inside the gates of Harvard. Look at all those smart people milling about. 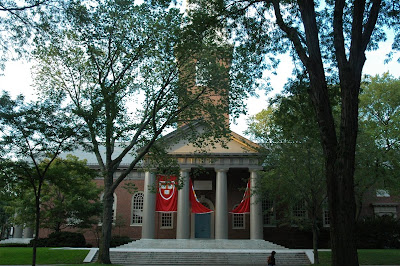 We were a tad bit disappointed that the banners were falling down but this is the building that just said “Harvard” to me. The ivy covered walls are on the other side of this building, which I believe was originally the chapel, and still has services on Sundays.
Three hours after our return to our hotel, and three phone calls to NWA finally produced a reunion with our luggage. The bell hop who brought our luggage to our room was quite amused to find out he was now my new best friend.
Wednesday was our day to review our high school history lessons and tour the city of Boston. Somehow history takes on a new meaning when you are standing in the spot it happened. Of course, being over 50 might play a part in my new found interest, but whatever, it’s pretty remarkable to be in the location where so much happened and the fact that there won’t be a test at the end of the trip makes it all the better. 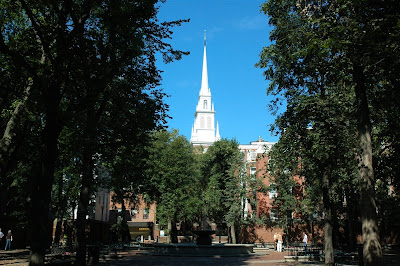 Old North Church, is the oldest church in Boston, built in 1723. It is most famous for the signals sent from it’s steeple (one if by land, two if by sea) the night of Paul Revere’s legendary ride. 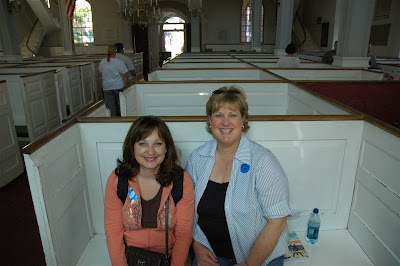 This cracked me up and made me sad at the same time. Every family had it’s own pew box. The wealthier you were, the closer to the front you got to sit. The poor and the black sat in the balcony. That kind of discrimination must grieve the heart of God. The part that cracked me up was the individual pews. It’s one way to contain the children I suppose but how do you ever get to “bond” with the other members. Of course, you wouldn’t want to skip church because then everyone, including the pastor, would KNOW you were missing. This church still holds Sunday worship services. 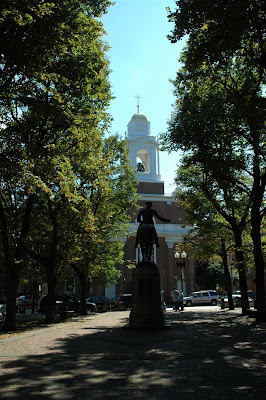 The Old North Church was primarily used by the British who occupied the Colony. This, the New North Church, now St. Stephens, was the church used by the colonists. It also happens to be the church where Rose Fitzgerald Kennedy was baptized in 1890. 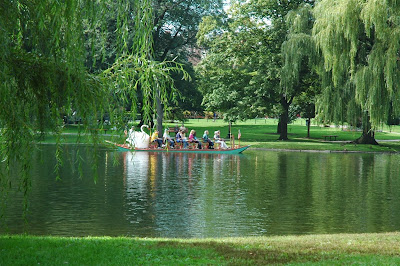 The Boston Public Garden swan boats. Yes, we rode them. I think we were the only ones on the boats without children. We were getting tired by this time and figured this would give us a chance to sit for awhile. I sort of thought that our boat driver would tell us a few things along the way, but no, he just pedaled. 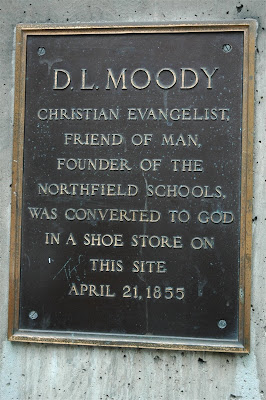 This may sound strange, but before leaving home I prayed that God would orchestrate our days. Knowing that we would have a limited amount of time, and hoping to spend a limited amount of money, I just wanted to get the most “bang for my buck,” if you will, out of our trip. While there were moments today when I was wishing that God hadn’t orchestrated quite so much walking in our day, I just found it very cool that we happened along this sign on our way back to the tour trolley. I considered staying and witnessing to the people who passed by, thinking that perhaps there would some day be another plaque here saying one of them came to know Christ at this location and they’d be a famous evangelist, but there really wasn’t anyone around and there was still a lot to see. 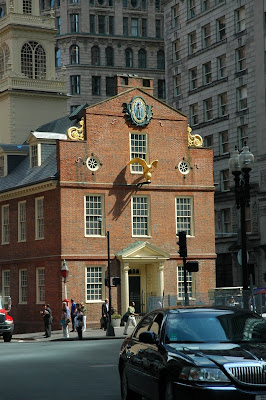 This is actually the back view of the Old State House. On the other side is a balcony where the Declaration of Independence was first read to the public. Every year on the Independence day it is read at this site. Wouldn’t that be cool to witness? 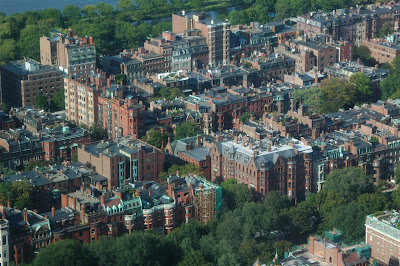 Brownstone apartments. A view from the 50th floor of Prudential Tower. 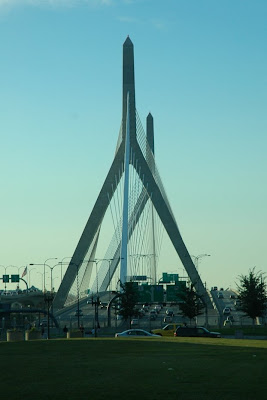 While this view of the Leonard P. Zakim-Bunker Hill Memorial Bridge doesn’t really show you how it spans the Charles River, it was still my best shot of the bridge. This bridge, opened in 2003, is the widest cable-stayed bridge in the world and boasts a total of 10 lanes for traffic. It’s an amazing structure.

Thursday we head to Cape Cod. We’ll see if I can tackle the Boston traffic and make our way there without getting lost. Hopefully I’ll have more pictures for you later in the week.