I heard a man speak a few years ago and tell the story about when his wife backed their BMW out of the garage with the passenger door still open. This little mistake on her part caused some major damage to their BMW, as you might expect. When she called her husband to tell him what had happened he told her to call the insurance agency and file a claim. She said, “Well, aren’t you mad at me?” to which he responded, “Did you do it on purpose?” Of course, she said no and his response was, “well then why would I be mad at you, it was an accident.” Last Saturday evening I suddenly found myself wishing I was married to that man. Not really, but I did have a bit of a blonde moment.

I was at a retreat at Lake Geneva Christian Center in Alexandria. As part of the retreat team I was helping with clean up at end of the weekend. One of the things that needed to be done was a bunch of tablecloths needed to be hauled from the worship center to a building on the other side of the road. The plan was that we’d load them into my car, along with a couple of other things, and then I’d drop them off at the building on my way out of town.

Between the road through the camp and the worship center there are two very wide sidewalks, and a grassy area surrounded by a wooden fence. These sidewalks are wide enough for a Suburban to drive up. I know, because there was already a Suburban parked by the worship center doors. In general, however, these sidewalks are only used for walking, or perhaps a golf cart. But, since I knew the Suburban would fit between the fences and up the sidewalk, I decided that driving my little mini-van up the sidewalk would be the simplest way to get the tablecloths into the car. If you’ve never hauled commercial tablecloths before, let me tell you, they are quite heavy, so my goal was to save steps on my already blistered feet.

Clearly, I underestimated the amount of space my car would need to make the turn onto the sidewalk and before I knew it I heard a horrible crunching sound coming from the right side of my van. To make matters worse, my van was now stuck and wouldn’t move forward or backward without resistance. There was only one person around who saw the whole thing. It was one of the young girls who worked in the retreat center cafeteria. She is clearly committed to the well being of the retreat center because her first words to me were “Don’t worry, you’re fine. The fence is still standing.” Gee, thanks. That was the first thing on my mind. I didn’t really find the humor in that statement until about three hours later and once I did, I couldn’t stop laughing.

In retrospect, it would have been better to call John and tell him about the accident while the tears were flowing, instead of waiting until after my severe case of the giggles started. The news might have been better received were it not punctuated with bursts of laughter. It’s not that he yelled at me or anything, it’s just that he didn’t quite catch the ACCIDENT part of the whole situation right away.

The morning following the accident John read a story in the paper about a woman who burst into tears when her kids accidently broke her treasured tea cup. The kids were stunned to see their mother crying and her daughter finally asked, “Do you love the teacup more than you love us? That stopped the mother’s crying as she assured her kids that they were way more valuable to her than a tea cup. John made me read the story and then looked at me and told me that he loved me more than the van. I knew that all along but it was nice to hear. In the end, it’s just stuff. I think God allows accidents into our lives sometimes to remind us of that truth. Our “stuff” is never more important than the people in our lives and certainly not more important than our relationship with Him. It’s good to have a husband who recognizes that truth . . . . eventually. 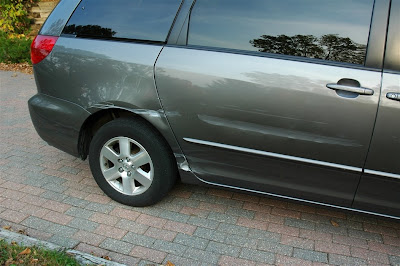 How is it that one little fence post can do so much damage? 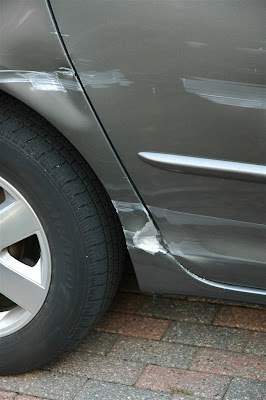 The worst part of the damage was behind the sliding door. I think that’s why it was so solidly stuck in place. I did, by the way, manage to get it unstuck. I figured any more damage wouldn’t really make a difference so I just gave it a little more gas and it moved. In a few weeks, it’ll all be a distant memory.

4 comments on “Encounter with a Fence”