Today is Harold Holte’s 90th birthday. He is my father-in-law. This past weekend we drove to Baudette, Minnesota to celebrate his birthday and also my mother-in-law, Emily’s, 87th birthday. Between the two of them, they have lived a total of 177 years! That’s a lot of life!

Two, of our three sons, and their wives were able to join us for the celebration and we were fortunate to have a little over an hour to visit them by ourselves. It’s not that we were trying to be selfish; it was just good to have some time to visit without the crowd that can sometimes overwhelm them. It was their first chance to meet our newest daughter-in-law, Heidi, as traveling to the wedding last December wasn’t possible.

It was fun to hear Emily and Harold share stories that our kids had never heard, parts of which I didn’t even know. The told how they met in New York City while they were both serving in the Navy. Harold did clerical work during WWII and Emily was in the WAVES secretarial pool. Their first date was to a Barnum and Bailey Circus. Our kids were trying to remember what actually qualified as their first date with their spouses and were afraid that someday their grandchildren would ask them and they wouldn’t know. I’m sure by the time they reach 90 they can figure out something to make up!

Harold and Emily have been married over 60 years. (I’m not sure of the exact number but it’s close to 63.) After they got married, they moved to St. Paul, where three of their seven children were born. In 1950 they moved to Baudette and have lived there, in the same house, which has seen many additions, for 58 years! Harold grew up in Baudette, but Emily, she was a city girl, having been raised in St. Paul. Not much has been said, but I’ve gotten the feeling at times that the adjustment to small town living was a challenge for her. I can imagine!

They have been great parents for their kids, and have loved their sons-in-law and daughters-in-law as if they were their own. They’ve seen trials and heartaches, joys and triumphs. It was a joy to honor them as they celebrate a joint 177 years. Emily actually has 10 more days to make it to 87, but she’ll get there. Her 58 years in Baudette have made her one strong woman! 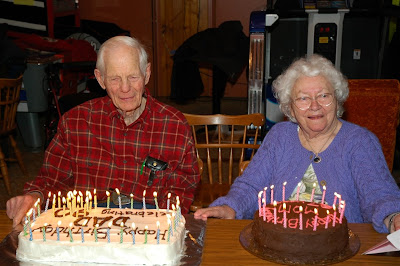 We didn’t put 90 candles and 87 candles on their cakes. The fire Marshall wouldn’t allow it. 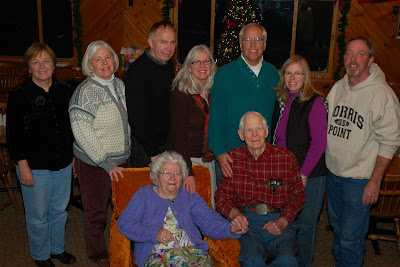 Emily and Harold were so excited to have all seven children at their party. 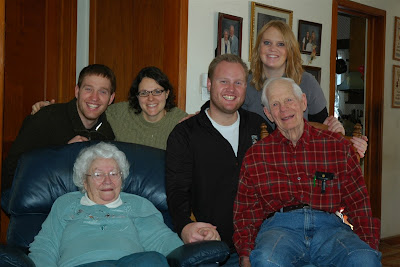 Adam, Heidi, Paul, and Erin, with Grandma and Grandpa Holte 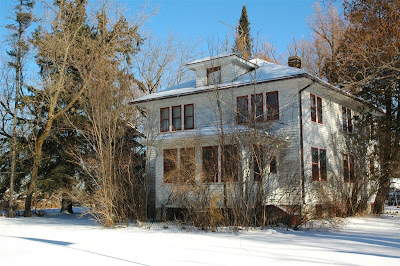 This is the farm house where Harold grew up. This home never had a well, though in later years did have a tank of water to supply the house. 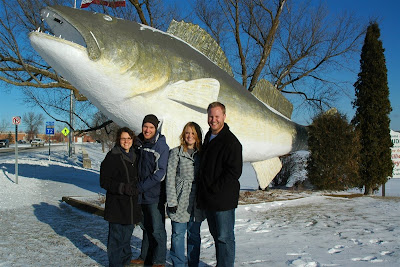 The kids just had to get a picture in front of Willie Walleye, Baudette’s mascot. It was -7° so there was some fast picture taking going on! When they were little this picture was taking in the summer time.