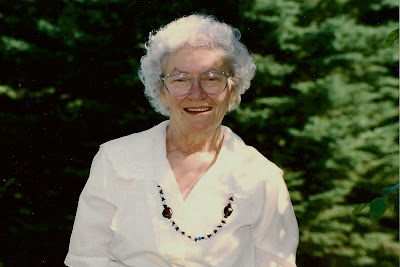 Last Sunday, my mother-in-law, Emily Holte, left this world for one far better. On Friday, we all said our final goodbyes. Grief is a funny thing. It seems like you are just trying to work through saying goodbye to one person, when in effect, what really happens (at least for me) is you are saying goodbye again to everyone you’ve ever lost. A song may be the same as the one that was played at your friend’s funeral, or when you hear the sound of the bugler playing taps you see the flag draped across your grandpa’s casket.

But, it’s not all sad. First off, I know that my mother-in-law is in heaven. What could be better than that? It’s all gain for her. The loss is ours.

My friend emailed me last night and said, “Why do you suppose the word fun is in funeral?” No one really associates funerals with fun but really, they are a very sweet time. You get to see family, and sometimes friends, that you don’t generally see. And, everyone has memories to share. There were some funny stories told this weekend and I simply have to share one with you.

Emily was of German/Irish descent, with all the determination, and a wee bit of stubbornness to go with that heritage. My father-in-law is 100% Norwegian. Together they had seven children. This information is pertinent to the following story. One day, just a year or so ago, Emily was at the grocery store with her oldest daughter, Pat. I don’t know why the topic came up in the grocery store, but it did. Emily looked at her daughter and said, “You know, lots of people ask me if I have a little bit of Norwegian in me and I just tell them, ‘well, I did at least seven times!’”

What I remember most about Emily is that she loved everyone. You never heard her say anything bad about anyone. And she had a wit like no one else. One night this past year she fell during the night as she got out of bed. Unable to get up on her own, she called to my father-in-law, Harold, for help. Harold asked her what she was doing on the floor and her quick response was “well, I’m not playing marbles.”

Emily also loved sweets but, unfortunately, had diabetes so her favorite foods were only allowed on a limited basis. But, as she got older she didn’t really care so much about her diet anymore and the family tried to keep her on track. At a wedding though, she couldn’t be trusted. I remember more than one time finding her sneaking a second piece of cake into a napkin or even into a paper cup to take home for later.

My sister-in-laws took turns caring for Emily in her final days and when it was clear the end was close Fran, the middle sister, decided that Emily should have one of her favorites for what turned out to be her very last meal. Fran brought her a bowl of peppermint ice cream for lunch. Even in a very weak and confused state Emily said, “You know what would taste good on this? A little chocolate sauce.” Emily knew how to make it a party! Even after her death she makes me laugh. I will miss her!