Christmas all-year is my plan for 2009. This month I had a blast having the neighbors in for a four course tea luncheon. I thought, at first, that is was “high tea” but apparently, to be considered high tea it needs to be served in the late afternoon or early evening. Since our tea time started before noon I guess it was just an ordinary tea. (Who says you can’t learn anything reading my blog?)

Anyway, since part of my Christmas Sanity plan is not only to eliminate craziness in December, but also be more relational, I called the neighbors and invited them for lunch. Being as I wanted this to be a special day for my neighbors, I first started by thinking about ways to make the table look pretty. This always proves to be a HUGE challenge for me. My girlfriend, Debbie, can put a table together in about 30 minutes and it looks amazing. I spend about two days and it looks o.k., but I keep trying. I started with a “tea” theme and went from there. I borrowed a few items from my friend, Jane, who knows more about teas than I could ever hope to know, and used many items that have been handed down from my mom and my grandmothers. Not only was I happy with how the table turned out, I found it fun to reminisce over the beutiful items that have been passed down to me. 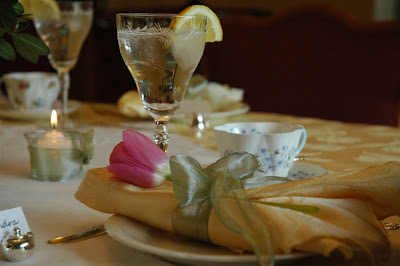 Then, I got busy checking out proper tea foods. I’ve visited many tea rooms around this area and I’ve never seen anyone do it better than Aprille’s Showers Tea Room in Stillwater. So, I modeled my luncheon after theirs, with a few modifications. Mine had probably 10% less carbs and 20% more fiber, which is not indicative of it being any healthier, just different. My menu consisted of Spinach/Strawberry salad, Cold Strawberry Soup (since I already had the strawberries), three types of Tea Sandwiches, and Scones with Devonshire Cream. Yum! The best part of it all is that nothing I made was difficult, but it all looked beautiful (if I do say so myself.) My neighbor, Sandra, volunteered to bring the scones (and some of the tea) so I think she had the hard part. 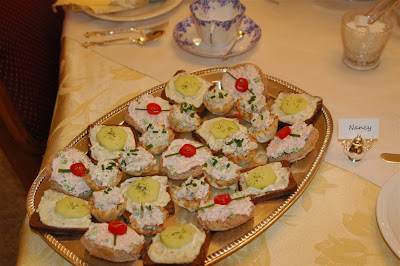 So, the food was good and the table looked beautiful but by far the best part was spending a couple hours with my neighborhood friends. Cyndy who lives catty corner behind us and has boys that grew up with mine. Sandra, who has lived across the street from us since we first moved in and is god-parent to our middle son. And, Pat, who lives two doors down and put up with my boys sliding on her hill for many years, not to mention I suspect, their mooching a few cookies.

We laughed and talked all through our meal. We even talked about the “good old days” when neighbors just dropped in to say hi. With all of us leading busy lives we usually just get by with a nod as we pass on the street or a quick conversation in the grocery store. As they left I wondered why we don’t do this more often. 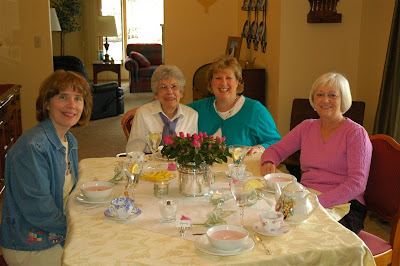 I could have made the pumpkin bread or fudge that I normally bring to my neighbors at Christmas. It would certainly have been cheaper. It would have even taken much less time, but this was way more fun! It may be an annual tradition, with hopefully a few simpler teas in between.

One another note, Susan, at Between Naps on the Porch has some fabulous tablescapes to view each week. She is inspiring if you are looking for something fun to do with your “table for tea.” Check it out. 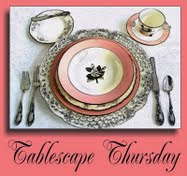