“Upon the recommendation of the faculty, the approval of the board of trustees, and by the power vested in me, I confer upon these candidates the degree of Bachelor of Science with all the rights and privileges pertaining there to.” With these words, spoken by the president of Multnomah University, our baby boy graduated in Portland, Oregon on Friday, May 15.

After the ceremony the rest of the family in attendance commented on the miracle. Oh, not the miracle of Scott’s graduation, we knew that would happen. The miracle was that somehow John and I both made it through the entire ceremony without tears. Even we were shocked. Of course, there had been a baccalaureate ceremony earlier in the day where we both shed plenty of tears, but the rest of the family was unable to be with us to witness them.

During Baccalaureate, student awards were also announced. At one point I thought they were describing Scott; “will do anything to help someone” (this was evident even in first grade), “a good listener” (Scott’s a great listener – just not much of a talker), “LOVES coffee” (we still don’t know who he got that from), and many other qualities that I thought aptly described my son. I told Scott later that for a moment I thought he was getting an award. He responded with, “I’m just glad they are letting me graduate.” “Great sense of humor;” that’s what was missing from the other boy’s list of qualities.

So what are “the rights and privileges pertaining there to” and doesn’t the president of the college know that you aren’t supposed to end a sentence with a preposition? The way I figure it your main options are to get a job, work towards a higher level degree, or bask in the knowledge that you have attained, well, more knowledge. Scott will be doing all three. After a short summer internship, Scott will head to St. Cloud State University to work on his masters. I’m sure he’ll take time for basking somewhere along the way. 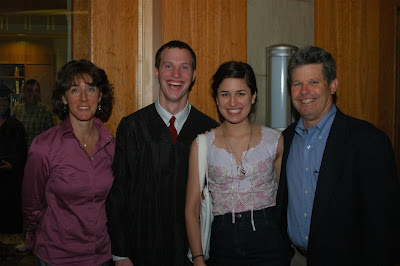 My brother, Chuck, and his family live in Portland and have provided “dorm respite” care for Scott over the past three years. Scott will miss them, especially on Tuesday nights, when he and his cousin, Connor, would watch the weekly episode of House together. 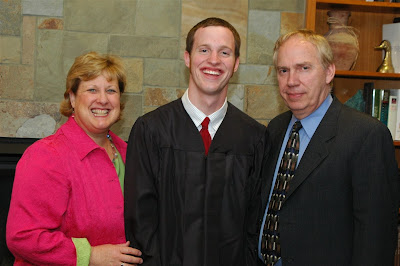 No earthly award could make us any prouder of our son. Good job, Scott! 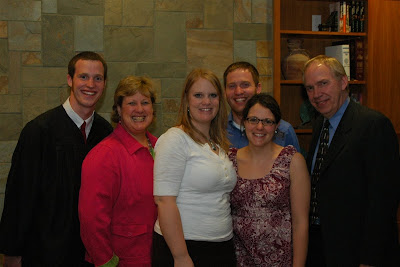 With the exception of big brother, Paul, who had to work, our entire family was there to watch Scott recieve his degree. And we’ll all be there again when his masters degree, with all it’s rights and priveleges, is conferred upon him. You can pretty much count on tears!