Ah, Memorial Day. Time off work, picnics, parades, working in the yard, time at the cabin; isn’t that what Memorial Day conjures up in your mind? As I fell into bed last night, contemplating the beautiful weather predicted for today and all I would get done, I was suddenly compelled to pray for the number of families who lost a family member to the war this year and would spend their first Memorial Day without them. I can’t imagine their pain.

My mother-in-law, Emily, was in the Navy WAVES during WWII. As a side note, WAVES stands for “Women Approved for Volunteer Emergency Service.” Approved? All I can say is, it was a different time. 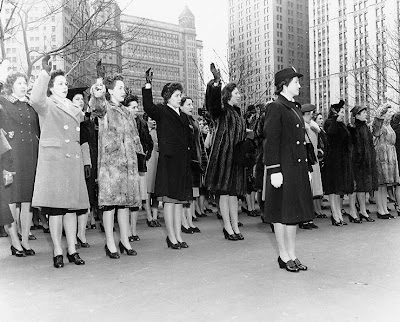 Emily is found in this picture, standing at the close end of the first full row, of the WAVES and SPARS (Coast Guard women – Semper Paratus Always Ready- they got a better name) taking their oath in front New York city hall on February 8, 1943.

At the end of Emily’s funeral last January we all gathered outside the church (in sub-zero temperatures, I might add) for a 21 gun salute and taps. This ceremony is usually held at the graveside, but, in January, in Baudette, MN, the cemetery is snowed in and the ground is frozen solid so the burial doesn’t take place until the spring. In fact, we just had her burial service last Friday. There were cows mooing in the background which provides a totally different atmosphere than the playing of taps. But, I digress – again.

After the playing of taps, when honoring a fallen veteran of war, the family is always presented with an American flag. I can’t remember all of the words I heard at Emily’s funeral that day,but the final words, spoken by a VFW representative as he presented a flag to John’s dad, will always stick in my mind – “on behalf of a grateful nation, please accept this flag as a symbol of our appreciation for your loved one’s service to our country.” I sometimes wonder if we are grateful enough, or if we just plain forget the price that has been paid for our freedom?

So, you see, I can’t let today pass without saying thank you. Thank you to the men and women who have served our country, be it in a World War, Korea, Vietnam, Desert Storm, Afghanistan, Iraq, or a war I may have forgotten. Thank you to the families who wait at home as their son, daughter, mother, father, brother, sister or cousin fights for our freedom. And, to those who are spending today mourning the loss of a fallen loved one, I thank you. On behalf of a grateful nation, who may have a tendency to forget, I thank you.