What follows is the second day of our trip – sort of. Two days of travel were required to get to Russia but somehow when we got there, it was August 3. I’m having issues uploading the pictures and making everything look right on this blog. So, the story will be there, and the pictues, but it might not always look pretty.

On Monday, which seemed like it should have been Sunday, we boarded the plane to fly to Riga, Latvia and then onto Kaliningrad. The plane from Riga to Kaliningrad was a Fokker 50, which translates into a 50 passenger prop plane. When we disembarked from the plane we went straight to a bus which drove, and I’m not exaggerating, maybe 100 yards to the terminal. As I waited on the tarmac to board the bus I decided to take a picture of the plane. I heard someone yelling but I didn’t realize it was directed at me until a kind stranger translated for me. Apparently, the guards were yelling “no pictures.” Oops! Of course, my Russian lessons didn’t really benefit me in this situation because being yelled at by security was not included in the first six lessons! In fact, had someone not translated for me, I would still be oblivious to their demands, or in jail, it’s hard to say which.

If you look to the right of the following picture you can see the guard with his arms crossed. He’s right before the “B” in Air Baltic. Those arns are crossed for me! Unfortunately, I didn’t see that either. 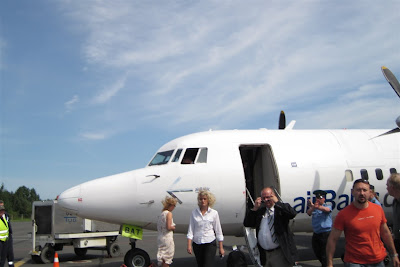 It was in the customs area that I got into serious prayer mode. Amongst the eight people on our team, we had 15 suitcases, all of which we’d been told are required, by Russian officials, to weigh less than 35 pounds. I’m fairly certain that ALL 15 of our bags did not fall under that weight limit. We’d also been told that our bags would be x-rayed, and searched. We made it through immigration with no major issues, gathered our bags to go through customs and walked right though. It seems that their weighing/x-ray machine was broken. I walked out and said to another team member, “Did we really just walk straight through cust oms with no search?” Sure enough, our first miracle of the trip!

The best line of the day was from one of the two teenagers on the trip. He looked at me and said, “I feel like I’m in a foreign country.” Uh, yeah, you are!

The next big adventure was going to the grocery store for breakfast food. It looked very much like an American grocery store, except the signs were not at all helpful! We wandered aimlessly until we found what we needed. Some of the team members were buying some extra stuff on their own and trying to use credit cards, which didn’t work. I helped unload the team food cart while they were going through the line and just as it was our turn, the clerk left the station – just stood up and walked away! Craziness! The missionary we are working with said, “You’ve just experienced Russia.” So, after picking our chins up off the floor we reloaded the grocery cart and moved to another area. What a hoot! 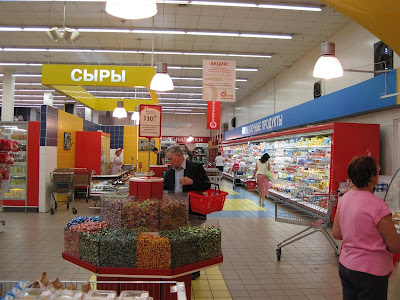 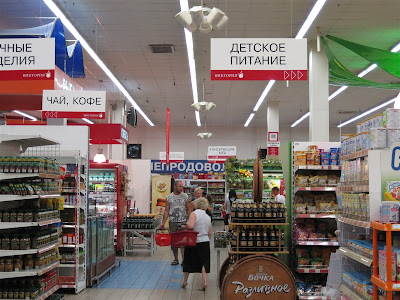 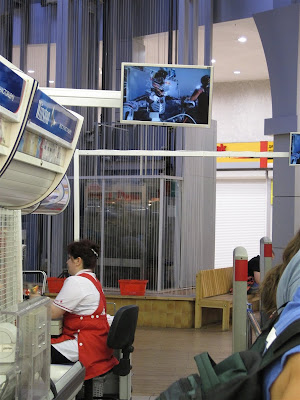 Our room is nice. Below is the view from our room. It looks like we are in a bad neighborhood, but in fact, we arn’t. I made John pose for a picture of our room. He commented that it was one of the nicest places we’ve stayed, which made me wonder who the man is that I’ve been traveling with for all these years. It is roomy, has a comfortable bed, a refrigerator and a television with one English speaking channel. I can’t complain, and in fact, am thrilled with the room. 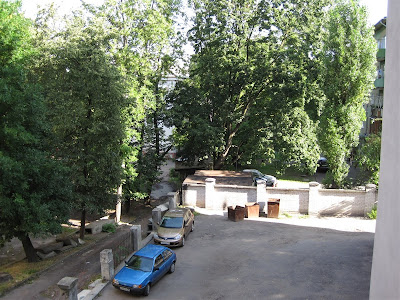 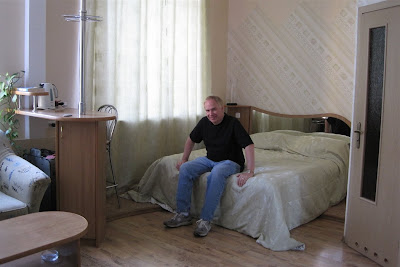 Tomorrow, we meet the kids!