Well, in my last blog a week ago, I promised you pictures from my trip to Armenia. And now, at long last, here they are. Of course, I can’t post all 100 pictures here but I thought I’d show you a few of the highlights.

Our first day in Armenia was spent trying to adapt to the 10-hour change in time zones and see some of the sights of Yerevan. Republic Square is the center of the city and was actually built during the Soviet reign of Armenia. It used to be called Lenin Square but, for obvious reasons, it was changed once Armenia gained their independence. It is said that a statue of Lenin has been replaced by a giant television screen somewhere on the square but I didn’t see it. Of course, it’s a very large square and we didn’t walk every square inch of it. In fact, we never really got any closer than this pictures depicts. 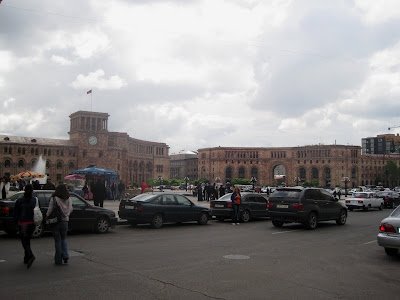 The last stop of our walking tour was at the Cafesjian Center for the Arts. Actually, I have since learned that the entire monument is called the Cascade and was built in the 1970’s during the Soviet occupation of the country. Water jugs protrude out of the building on every level and at one point in time water would flow from one level to the next via these jugs. It would be interesting to see the Cascade when the water is turned on. The art museum is at the bottom of the monument, but I believe the entire structure is now owned by Gerard L. Cafesjian, an American born Armenian who actually lived a great part of his life in Minnesota working for West Publishing. Cafesjian‘s story is really kind of an interesting, Click here if you’d like to read it. 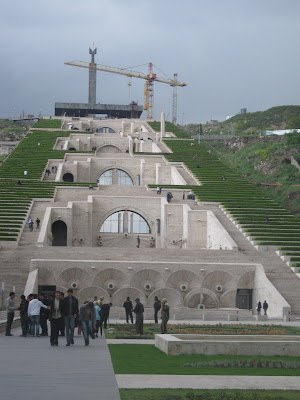 Below is the view of the capital city of Yerevan from the balcony of my first hotel room. I think I ended up in a total of four different rooms while I was in Armenia. Being as there were five of us, and I snore the loudest (no need for comments on this statement, I had my own room. I was worried about getting lonesome but I needn’t have. Every morning, shortly after I’d get up someone from the team would end up at my door wanting to use my hair dryer, curling iron, or converter. I felt like the mom with the best Kool-aid on the block. 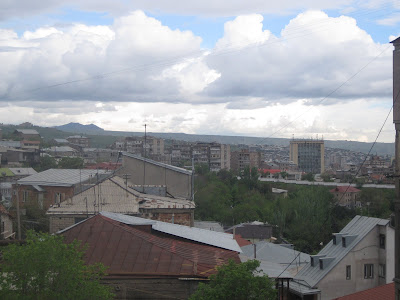 When I wrote my blog about our trip to Jermuk I mentioned the woman who invited me to her apartment to take pictures off her back porch. This is one of the views from that “photo shoot.” The picture really does no justice to the view which actually took my breath away. 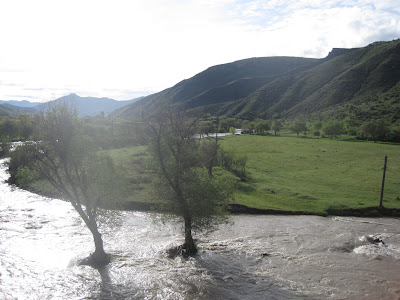 Over two years ago God put a big dream in my heart to go to Armenia to minister to women. When I gave my first talk on “Hearing God’s Voice” I shared with the women about how that moment marked the culmination of that dream and I wanted to record it in pictures. They graciously smiled and let me take their picture. What choice did they have really? I was after all, the one with the camera . . . . and the microphone. 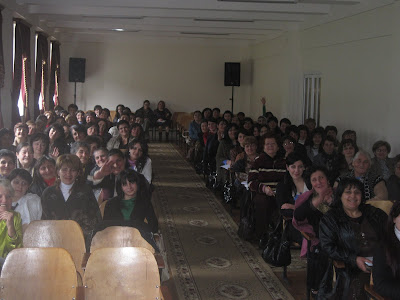 The view from the front door of the church in Jermuk. Too bad I didn’t see all this snow before I left. I would have packed differently; perhaps more sweaters and less sandals. 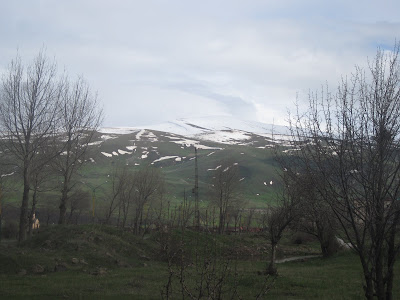 These women came from across Armenia to attend the conference in Tsaghkadzor. I can’t help but think that they are “world changers.” God will use them to make a huge difference in Armenia, I have no doubt. 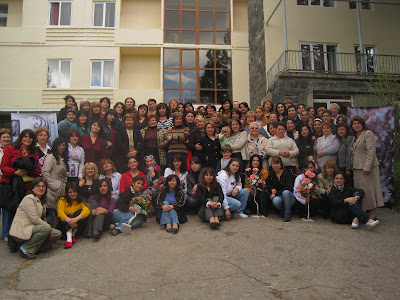 When we finished our conference in Tsaghkadzor we had just enough time to stop at the souvenir market. There was a whole lot of stuff that I could live without but my favorite purchase was an intricately carved replica of Noah’s Ark (complete with animals) in front of Mt. Ararat. Truth be told, I’m sure I could have lived without it, also, but I bought it anyway. 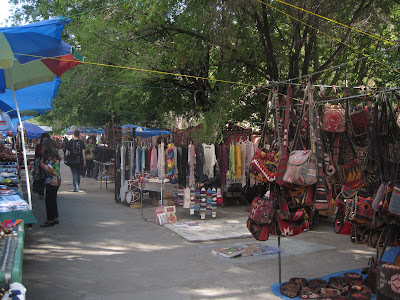 Remember the blog I wrote about all the food at our dinner in Bjni? Well, this picture shows just SOME of the food we had that night. And the beautiful girls in the picture were our translators and host while we were in Armenia. Marine (second from the left) was my translator at the two small churches we visited. The first day she actually translated something to me as “blah, blah, blah,” which totally threw me into a fit of hysterics. I will never let her live that one down. 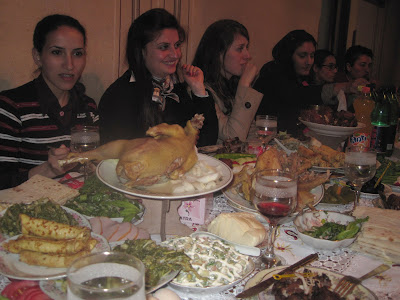 Can you imagine hauling all this stone in from another region to build this Noravank Monastery? And, it’s not like it was South Dakota with nary a hill in site, or that they had trucks to haul it all. Oh no, Henry Ford didn’t show up for another 500 plus years. When I originally wrote about this place I said it was built in the 9th century. Apparently, I was misinformed. If you recall I had purchased the Italian version guidebook. Anyway, a little internet research shows it was built in the 13th century. But still, I have to wonder why they would carry in all this stone when there was stone in abundance all around them? Maybe in heaven one of the builders can explain their thinking to me. 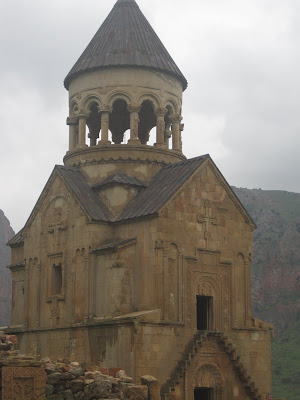 This, the Khor Virap monastery, is the one very close to the base of Mt. Ararat and is significant in Armenian history because this is where St. Gregory the Illuminator was held for 13 years. Because of him, well really because of God’s work through him, Armenia was declared a Christian country in 301 A.D. 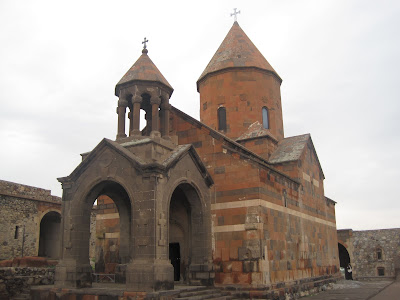 I must have taken at least ten pictures of Mt. Ararat while I was in Armenia. One from my hotel room, one from the top of the Cafesijan Center for the Arts, and even one from the monastery near the base of the very mountain itself. But, the best picture, by far, is the one I took out the window of the airport cafe on the day we left Armenia. It is mind-boggling to know that somewhere on this mountain, Noah stepped off the ark onto dry land. You don’t suppose he looked out across the land and said, “in a few thousand years, I think there’s going to be an airport right over there”? 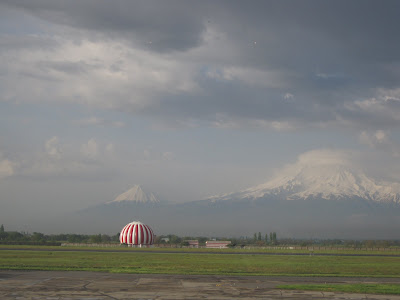 What an amazing opportunity this trip was for me. Some days I think I need to pinch myself to believe that God would really choose me to share His Word and His love to people across the globe. I am incredibly blessed.