Today John and I celebrated our 35th wedding anniversary. Somehow being married that many years seems like a HUGE deal to me. (Of course, compared to my parents 59 years, and John’s parents, who shared over 60 years, it’s not much, but still, it’s a lot of years.) I told John this morning that I think the secret to our long marriage is that we are both stubborn. One would think that would be a detriment to marriage but in our case, it’s worked to our advantage. We’re too stubborn to admit defeat. So, here we are and I’m glad we didn’t give up when the going was tough. Oh, don’t act so surprised. No marriage makes it 35 years without tough times.

There is ONE thing that I would do differently if we were starting our marriage again. (Well, to be honest, there are a few things I’d do differently but just one I want to talk about here on my blog.) I’d recommend it to every married couple. What is it, you ask? I’d celebrate more. Or, to be exact, we’d celebrate more. I know of a couple who plans an “anniversary weekend” every year. They haven’t always had the money for extravagant trips, and at times they’ve had tiny babies that they couldn’t leave so their “weekend” might be at home alone with candlelit dinners and movies on t.v., but at least they’ve done something. Not only that, but they’ve also documented each of their anniversary weekends with pictures and stories. What a special scrapbook that must be. And, I have to say, I wish I’d thought of that earlier.
But, it’s never too late to start a new thing so this year, in honor of our anniversary, we took a trip to the North Shore. For those of you unfamiliar with this region, the North Shore is basically all of the area along the shoreline of Lake Superior which starts in Duluth and goes on up into Canada (though I suspect in Canada it’s probably changes from being the North Shore to the South Shore.)
We had an amazing time due, in part, to the advice of a couple of people. One facebook friend suggested a book called Waterfalls of Minnesota’s North Shore by Eve and Gary Wallinga. The subtitle is “A Guide for Sightseers, Hikers, and Romantics.” I’m sure I fall into one or two of those categories. (Probably not the hiker part, however.) This book was our “guide” for the weekend so I hope you are ready for a bunch of waterfall pictures. The book is divided up by rivers (of which there are a BUNCH), with information about the difficulty of the hike (a key factor for non-hikers such as ourselves), and a rating of “the waterfall experience” (which was helpful because I didn’t want to waste my time hiking to a dud of a waterfall.) So, here goes – our waterfall weekend.
Our first stop was just north of Duluth along the old scenic Hwy 61. Taking this route not only gets you out of traffic for awhile but also swings you out along the lake and makes for a more interesting drive. There is a little wayside rest along the French River that has somewhat of a trail down to the water. I actually hadn’t read about this stop in the book. If I had, I would have crossed the road and hiked up a bit to see the actual falls. Instead, I only saw the area where it flows into the lake, but still, it’s quite pretty and worth the short walk down the hill. 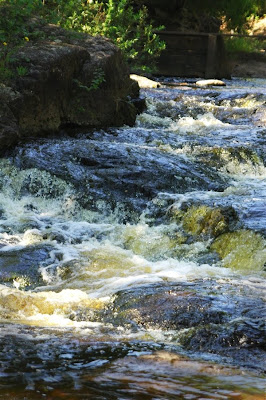 I absolutely LOVE pretty much all forms of water, but watching it as it tumbles over rocks, surrounded by trees and plants is very close to the top of my list of favorites. After I finished taking the previous picture of the stream, John turned around and took the next picture of the water flowing into Lake Superior. 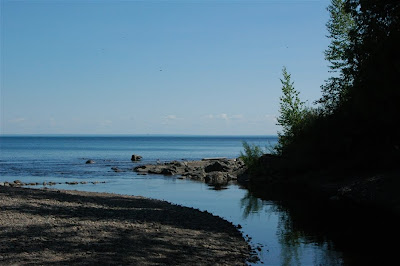 We drove a little further up the scenic highway and turned off on Stony Point Road, upon the advice of John’s sister, Pat. She said we’d find some big, flat black rocks there and on certain days you could sit there and watch people kayak surfing. This was not one of those days. But still, the rocks were inviting and it was a sunny, warm afternoon so I grabbed the bug spray and headed onto the rocks. We enjoyed just sitting there for a bit and for some dumb reason the only picture I took was of my ghost white toes as I sat staring into the clear water. As I sat there I decided that the flies around us could be a problem so I sprayed the bug repellent on. BIG MISTAKE! Though the bottle read “Repel 29” is should probably read “Come Hither Biting Flies” because that is the affect it had. Fortunately, we had enjoyed our time there before the bugs descended because once they arrived the fun was over. I started to think that our whole weekend would be effected by the little pests but we never really had another problem (and Repel 29 is in the garbage!) Though my toes aren’t the highlight of this picture, it at least gives you a feel for the rocks surrounding the area. 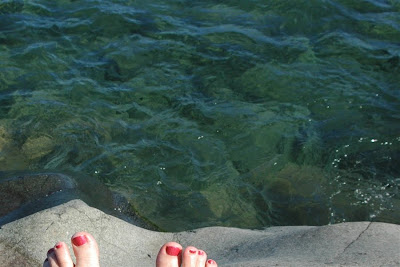 Early Saturday morning (well, not too early, but early for me) we headed out for our first hike of the day to the Upper Falls of the Poplar River. 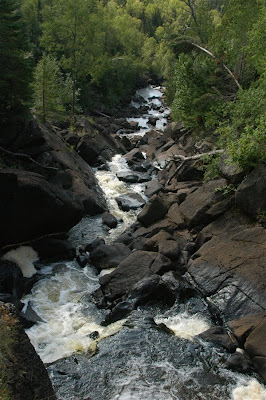 With that short hike out of the way, we headed a few miles north to the Cascade River. Cascade Falls is apparently the most photographed falls on the North Shore. It’s easy to see why. Plus, there’s the added bonus of it being an easy hike, also, so that might have something to do with it being so often photographed. 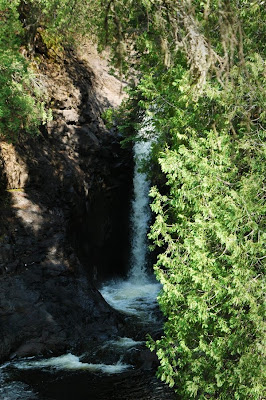 We continued along the cascade river and up a series of steps. According to our book there were 47 steps to climb to view more of the cascades but I didn’t count. At one point I ventured off the trail a bit to lean in and get this next picture. It was totally safe but it seems that John thought I might plummet to my death and kept saying “ho, ho, ho.” It wasn’t in a Santa type of manner though. It was more in a “stop, stop, stop” kind of way and it always cracks me up when he does that. If he’d had a lasso he would have made me wear it, I’m sure. 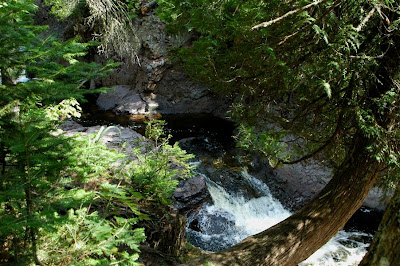 After we finished our hike we went across the highway and headed down to the beach for a little time sitting on the shore. No flies – Yay! 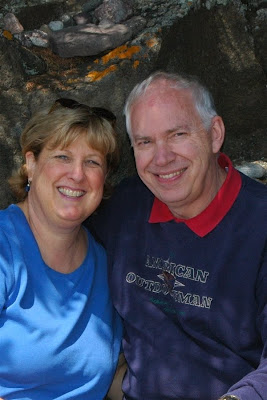 Well, by now we needed lunch and a nap so we headed back to the hotel room. Our plan, after our nap, was to go to Grand Marais for dinner, stopping on the way at one more waterfall located on the Fall River. We would never have found this spot were it not for our book. There’s no parking lot, no sign and a pretty ragged trail. The book referred to the hike as moderate and the trail as poor. But, we made it down to see the waterfall only to have our camera malfunction. Thus there are no pictures, which is kind of a drag because it was our favorite spot. Oh well, now we have a reason to go back. So, please try to imagine it however you’d like. Or, you can buy the book and look at the picture in there. We did, however, find this heart shaped rock along the beach and I thought is was SO romantic to find a heart shaped rock on our anniversary weekend. I admit, I’m a sap. What can I say? 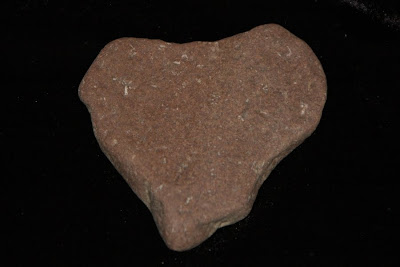 John’s sister, Pat, had also recommended a number of restaurants in Grand Marais and suggested that perhaps one called Chez Jude would best accommodate my allergy issues (no dairy, no soy.) Grand Marais had a full blown celebration going on this weekend so we parked wherever we could find a spot and walked for what seemed like a mile to the restaurant. It was worth the walk, however, and after dinner we found a short-cut back to the car! Chez Jude has apparently won an award as one of the top 57 restaurants “worth the drive.” It is a well deserved award. Not only was the food amazing, and the service outstanding, but we also enjoyed an awesome view of the bay. As we ate on the front porch we watched a sea plane flying in and out and a sailboat taking customers on an evening sail. It was truly a delightful experience all around. This is the view from our table on the front porch. Please keep in mind that the quality of my pictures goes down a bit from this point on because we had to switch to our little point and shoot camera with it’s limited capabilities. 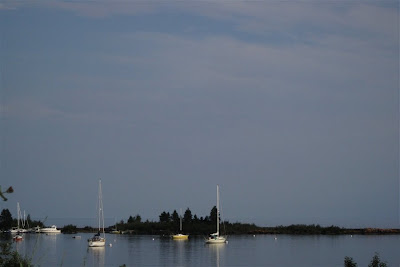 After dinner we sat in the Grand Marais park and listened to “Tres Amigos” (an easy listening singing group) and just took in the view, right up until the rain started, which sent us scrambling for our car. 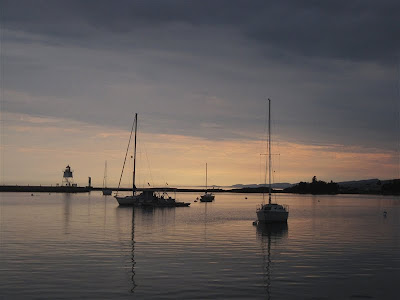 On Sunday morning we had breakfast sitting on the deck outside our room at Lutsen Lodge. You can’t complain about a view like this. 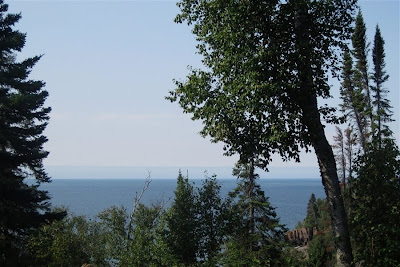 Our last two waterfall visits were technically just south of the North Shore. We stopped at Jay Cooke State Park on our way home on Sunday. The book indicated there were two spots to check out at this park. The first “falls” was actually a series of cascades on the St. Louis River and could be seen from Oldenberg Lookout which was a short, easy hike from the parking lot. From that point we could take a “strenuous” but short hike down to the water level should we desire. Fortunately, our brains stepped in front of our desire once we determined the definition of strenuous was “bring overnight gear and pray a helicopter will be able to get to you once you reach the bottom.” It’s hard to get much of a feel for this river from this picture but trust me, if you are ever in the area, you’ll want to stop. It’s worth your time. 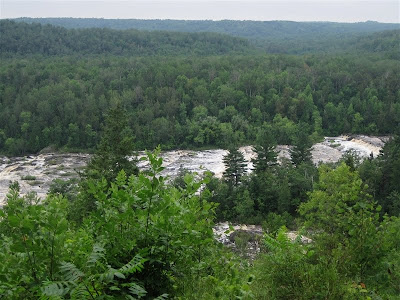 The last spot we visited before heading home was also on the St. Louis River. This picture is of “Swinging Bridge Falls” which, coincidentally can be seen from the Swinging Bridge behind the visitor center of Jay Cooke State Park. 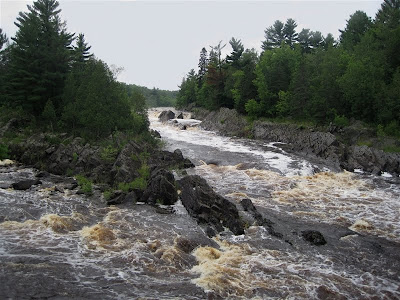 Who knows what kinds of adventure our next year of marriage will bring? But one thing I know for sure; on August 9, 2011 we will celebrate our marriage, take pictures, and promise each other the rest of our lives.

2 comments on “35 Years to Celebrate”