I decided I’d better get the rest of the Israel trip pictures up on my blog before I completely forget which picture is what. As on my last blog, the description of each picture comes before the photo.

Our third day of touring began at the church in Tabgha where Jesus feed over 5000 with five loaves of bread and two fish. (The story is in Mark 6 though there wasn’t an actual church there at the time.) As is so often the case, this church was built over “the rock” where it’s believed Jesus stood when he blessed the bread and fish. A mosaic of loaves and fish has been placed in front of the rock to commemorate the miracle. 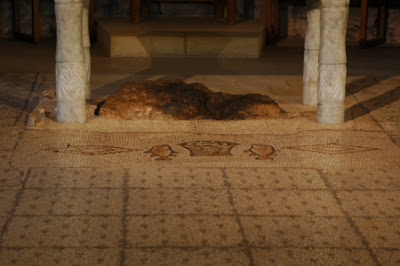 We were able to participate in a baptism at the Jordan River. It wasn’t the same location as Jesus was baptized, but it was the same river. Still, very cool. 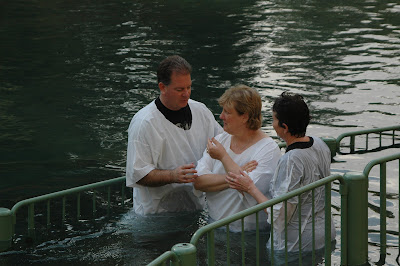 John’s baptism in the Jordan River. 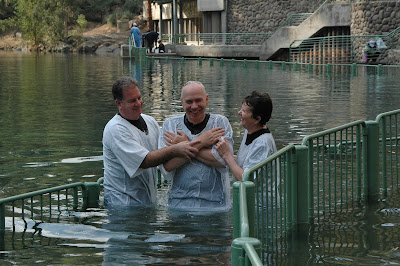 Looking down on the ruins at Bet-She’an. I wrote about it on this blog post. 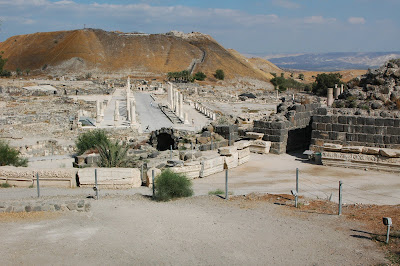 You see that hole in the rock that looks like a doorway? That’s the cave at Qumran where the Dead Sea Scrolls were found. 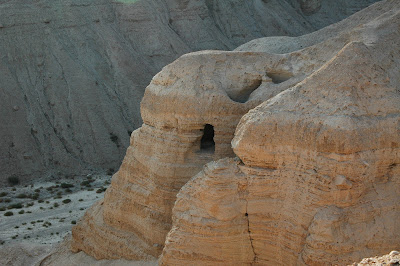 We spent one night at the Dead Sea and had time to enjoy the area before leaving in the morning. Being as we’d checked out the pool filled with Dead Sea water at our hotel the night before we didn’t feel compelled to actually take a dip in the real Dead Sea. I tell you what, when my VERY white skin floats to the surface, it could actually blind someone. I couldn’t take that chance. But, John got a picture of these guys floating away. Even skinny “sinkers” would float here. You do NOT, however, want to get this water in your eyes or mouth. 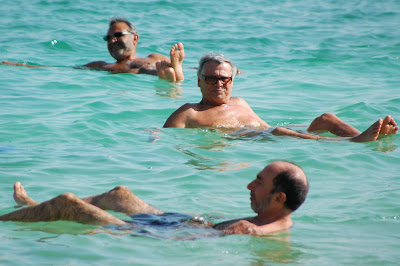 Mt. Masada was where King Herod had a palace built should he need to escape. This is a model of what his palace looked like in its day. I wrote about Masada here. 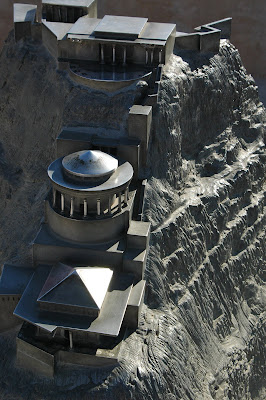 Some of the ruins at Mt. Masada. 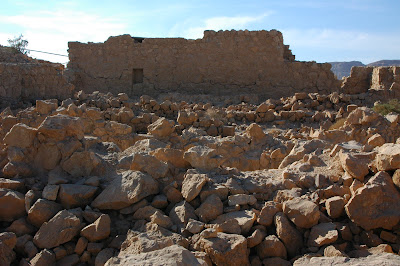 En-Gedi is where David hid from King Saul (Story in 1 Samuel 24:1-7.) You see that goat at the top of the mountain. He’s a descendant from the goats that David hung out around. I’m sure of it. 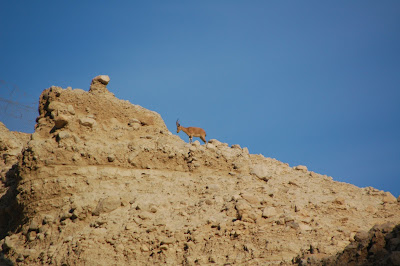 This would be a great water source for David, but for all the goat scat on the edges. Maybe back then they didn’t worry about that kind of stuff. 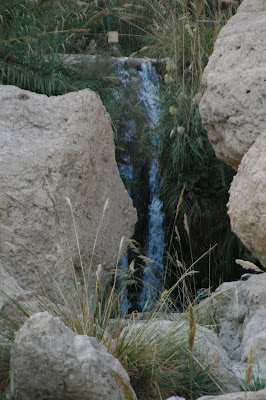 The city wall around Old Jerusalem. It’s not original. Well, I suppose it was original at some time, but not from Jesus day. Earthquakes and all. 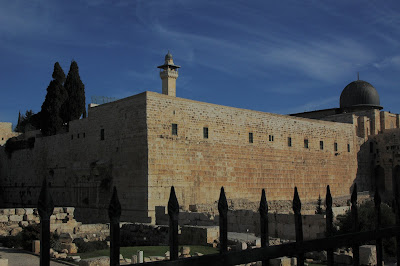 The spot where Jesus carried his cross up the hill is called Via Dolorosa. These crosses were along that street. Twenty points to whoever knows what those flags are for. None of us thought much of them until we realized that we kept seeing them in lots of different places. While here we saw two guys (very good looking, I might add) pick up one of the crosses and go running up the street, with a camera crew following them. One of my teammates was scolded for taking a picture of the whole scene. It wasn’t until the third time we saw the flags and camera crew that we realized they were filming The Amazing Race. Truth be told, I still wouldn’t know if some of my teammates hadn’t figured it out. 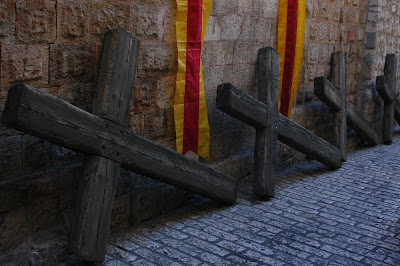 I’ve always pictured the Via Dolorosa as a quiet city street. Not so much; it’s a market place. 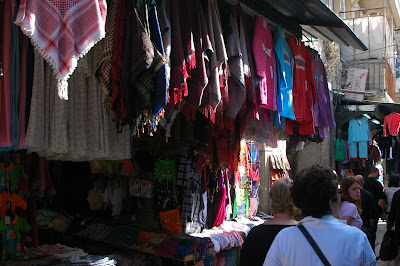 Praying at the Western (Wailing) Wall. This, of course, would be the men’s side. If you look closely, you’ll notice the third guy in has an AK47 over his shoulder. He’s SERIOUS about his prayers. 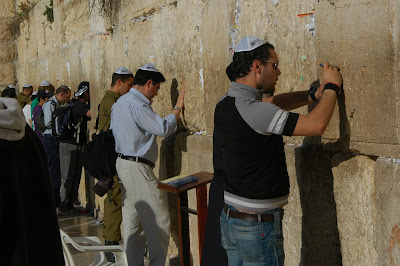 The Garden of Gethsemane. 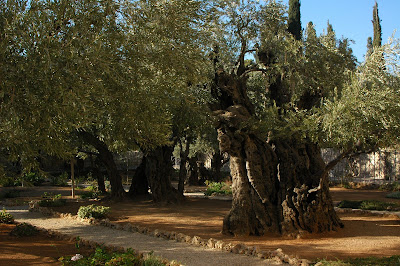 I’m not exactly sure what the place is called where we are standing but in the background is Jerusalem. 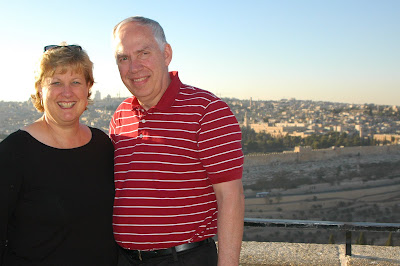 Getting into Bethlehem isn’t quite as easy as driving to the Twin Cities. There are several layers of security to pass through; which is easy if you happen to be an American tourist. If your Jewish, and live in Israel, I don’t think it’s even possible. I found the Peace banner on the outside of the wall almost sad. 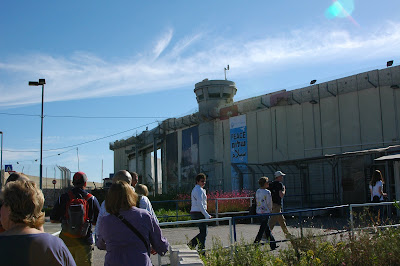 This is the proclaimed birth place of Christ. Just how you pictured it, right? 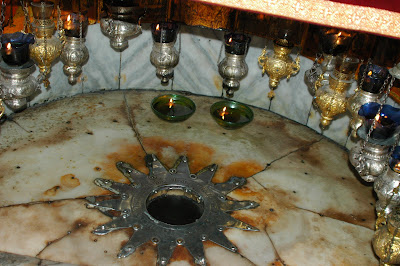 Since no one REALLY knows where Jesus is born, I’ve moved it to this location. It looks more realistic to me. It’s a cave where they know shepherds kept their sheep. And seriously, doesn’t it just feel better to picture Jesus being born here than in that shrine? I thought you’d agree. 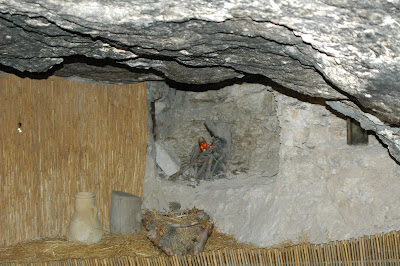 Apparently, it was “learn about the American Pilgrims” day in Bethlehem. It just so happened to be Thanksgiving day. 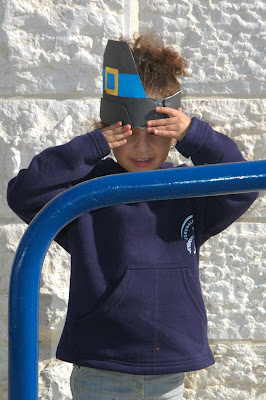 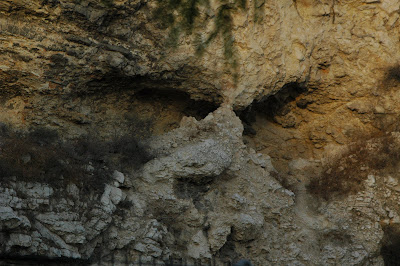 This little (well, not really all that little) ditch area is where they believe the stone was that closed up the grave where Christ was laid after his death. They were able to roll it in front of the tomb this way. Apparently, it was pretty heavy – estimated to be about 2.5 tons! The step there in front of the door is definitely NOT original. 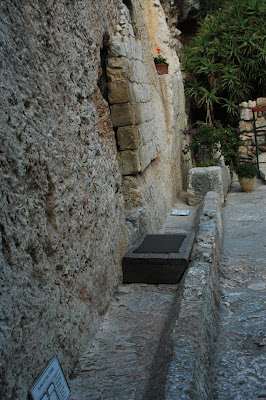 The tomb is empty! You can’t really see the whole picture here. On the other side of the tomb (to the right), is another spot to lay someone to rest but the “foot area” isn’t dug out like this side is, indicating that it was a tomb for two people but only one person every laid here, but HE HAS RISEN! 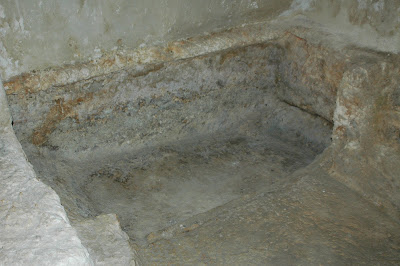 And that concludes my little visual tour of Israel. Hope you enjoyed it.