Normally, by today, I would try to have my 365 project photos here on my blog but I was gone this weekend and today there is much more exciting stuff to talk about so I’ll post those later.

I’m sure most of you who read my blog have probably already heard the news but if not, here it is.On Sunday, January 23, 2011, I became a Nana for the first time! Amelia Louise Holte was born at 7:48 PM. There is nothing like it in the world!

As it happens, I have my own “labor and delivery” story though I’m not stupid enough to think that my story was even close to as challenging as my daughter-in-law, Erin’s. She did such a great job bringing Amelia into the world. Because Paul (Amelia’s dad) is a commercial airline pilot I was on stand-by as back-up assistant to get momma to the hospital should baby decide to show up when dad was on a trip.

I was at a scrapbooking retreat this weekend so, because of my duties as back-up labor coach, I left plenty of phone numbers with the mom-to-be. I even texted on Saturday morning to check in and make sure that everything was status quo; which it was. My friend, Debbie, and I stayed up kind of late on Saturday night because, well, when you’re scrapbooking, that’s just what happens. So, when the phone rang an hour and a quarter after I’d gone to bed it took me a few minutes to figure out what was happening. You see, even though Paul had scheduled plenty of time off around the anticipated arrival date of February 8, Amelia had other plans, even though her daddy had just landed a plane in Lisbon, Portugal.

Fortunately, Paul was able to get right back on a plane for the flight home, miraculously make a tight connection in Newark, and arrived at the hospital, looking somewhat like the Prince on a white horse coming in to save the day after most of the work had been done.Erin’s mom and dad had arrived from Michigan around 9:30 that morning so we’d been tag-team coaching throughout the day.Once Paul arrived we let him take over and when it was apparent the birth was eminent we left the room and waited in the visitor’s area for the arrival; or until Diane and I got anxious, as the case may be.

We’d received news that things were getting close, and by now John had arrived and joined us in the waiting area, so Diane and I left the guys and stood outside Erin’s room to “listen.” We talked in soft whispers so as not to be found out.We heard a big clunk, which we assumed meant they were moving the bed into position, and some other indiscriminate noises, but eventually we heard the sound we were waiting for – the first cries of our granddaughter.And right after that, the crying of her very happy dad. To a Nana’s, and a mom’s ears, both were priceless.

We might be prejudiced, but we think she’s the most beautiful baby in the world. 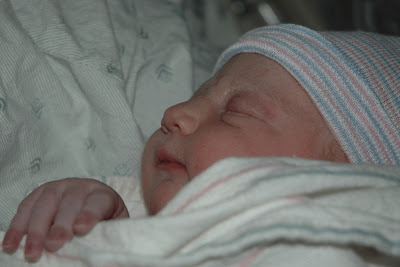