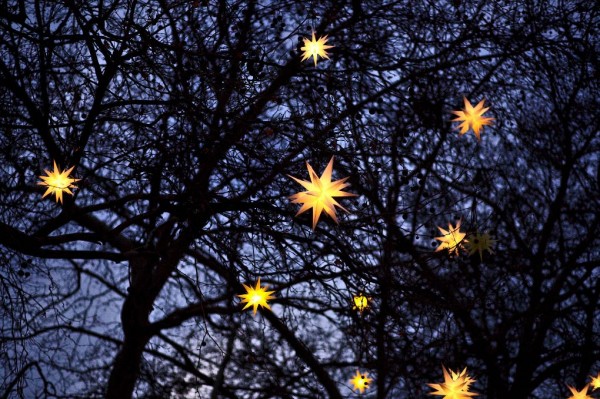 This past weekend we headed to Chicago for a friend’s wedding. The original plan was to leave on Friday morning, drive to Chicago; go to the wedding on Saturday morning and drive to Stevens Point on Saturday afternoon following the reception to visit our son and daughter-in-law. And, we basically did all of that but, as has been what seems to be the norm, this past month, there was a storm brewing. A few weeks ago when we had a big blizzard the weather reports said there was a 100% chance of snow. I like that kind of confidence from the weather forecasters. Such was not the case in this impending storm. This report was more like “there’s going to be rain, or freezing rain, or perhaps some snow and it’s going to start on Thursday, or maybe Thursday night around 9:00, possibly not until Friday, but sooner or later, something is going to happen.” We were determined to get to this wedding, probably because we’ve missed just one too many events in December due to weather. I was not up for being held captive in my house for one more weekend.

With this in mind, and not having a clue what the weather was going to do, we decided to head south on Thursday night after John got off of work. Granted, LaCrosse, Wisconsin, where we spent Thursday night, isn’t that much further south but the weather report was for warmer weather there and we figured this had to be a good thing. We didn’t get into LaCrosse until 9:00 PM but it was still 47 degrees upon our arrival (which may not sound warm to those who live in the more tropical states, but trust me, it’s pretty toasty when you’ve been dealing with temps in the teens and 20’s. )

The last time we were in LaCrosse was 13 years ago. John had heard about a light display in the riverside park there and we decided to take a little pre-Christmas getaway sans children. We had so much fun and talked about doing it again, maybe even bringing the kids along the next time. Sadly, that never happened; I’m not sure why. But, even though we hadn’t originally planned to be in LaCrosse on Thursday night, we decided that since we were there we should visit the light display again.

I know that I sound like I’m five years old, but this is truly one fine light display. It’s put on by the area Rotary Clubs and features over 2 MILLION lights. This year all of the lights were switched over to the LED variety, which, to be honest, I’m not a huge fan of, but here (and I hate to admit this), it was beautiful.

The fact that it was warm enough to walk through the park and take it all in, added to the magic of the evening. I felt like a girl on a first date as we leaped over, stepped around, or, in some instances, walked right through the puddles created by the melting snow. (John didn’t seem to share my enthusiasm for the adventure. He enjoyed the lights more than the puddles. I loved it all; maybe because my shoes weren’t leaking!)

The pictures can’t do it justice but still, I wanted to share some with you. This giant tree of lights is at the entrance to the park. 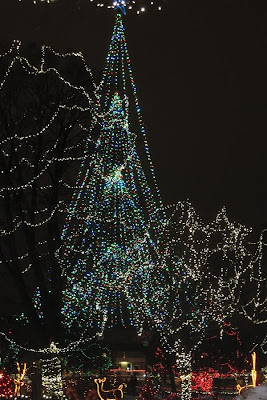 I’m not sure what toy soldiers have to do with Christmas, but they do always seem to show up and I think they’re kind of cute. This little guy greeted us as we entered the park. He wasn’t at all concerned about the huge puddle to his left. 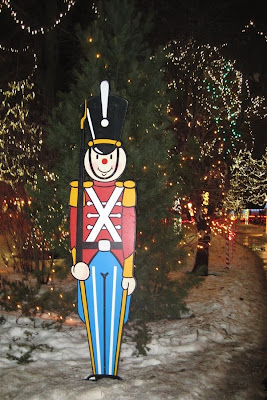 The Rotary Lights display has expanded quite a bit since the last time we were there. This boat sits right on the edge of the Mississippi River which borders the park. 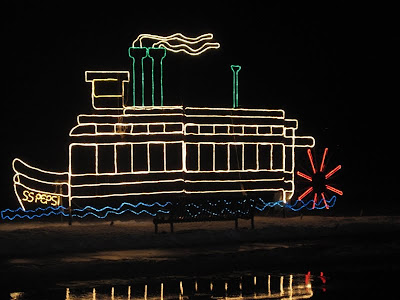 Some of the lights are in constant motion. This helicopter’s blades light up one or two at a time giving the illusion that they are spinning around. It’s hard, however, to capture that in a still photo. They also had “squirrels” that lit up in the trees which made it look like they were running around from tree to tree. They were even harder to catch on film because, if you know squirrels, they are very fast. 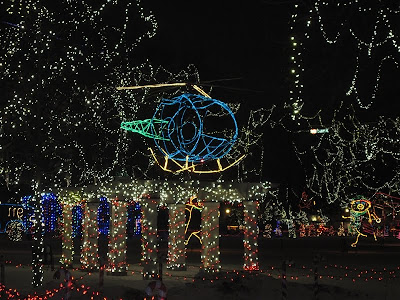 There are several small evergreen trees that line the outside of the park. I’m not sure if they are there year round or just put up for the display but they appear to be permanent fixtures. In other words, there is no evidence of a tree stand. These trees are decorated by organization through-out the area. The one here is decorated by dental hygienists. Not all of them are decorated in a manner that so obviously relates to the organization, but it’s fun to see the creativity of each group. 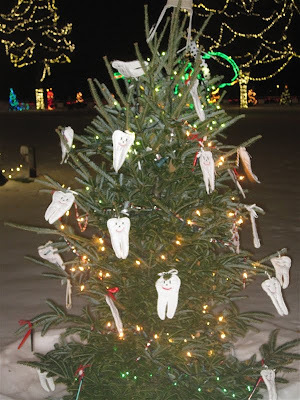 This view is just a small section of the park. 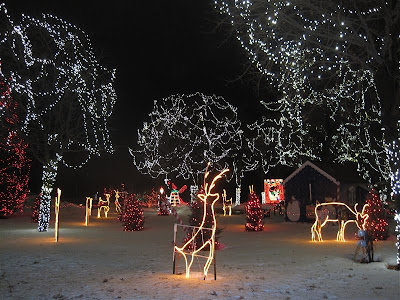 I think the really cool part of this whole display is that if you are driving through (instead of walking) the first exhibits you see tell the story of Christ’s birth. Sadly, I didn’t get any pictu12res of that, primarily because since we walked through we got to that area last and just as I clicked my camera they turned the lights out on that section (it was near closing time by now.) Some nights during the display season they have a live nativity display. There is actually a whole schedule of events that takes place during the month which includes concerts, a 5k run/walk, and carriage rides. If you are interested in going some year, visit the rotary lights website here. Personally, I think it’s worth the trip; maybe not if it requires you fly in, but certainly, if you live in the area.

It certainly added some unexpected fun to our weekend.