Wow! What a week! Most of you know by now that we have welcomed our second grandchild into the world. Charles John Holte was born on April 1, 2011 to his very proud parents, Heidi and Adam. He was 8 pounds, 12 ounces and 22” long. As with our first grandchild, I was able to be at the hospital and hear Charlie’s first little cries on the morning of his birth. What an incredible blessing.

But, I’m just sure you are going to want to hear the REST OF THE STORY.Tuesday, March 29, was much like every other day, except I needed to get into the doctor to deal with a persistent kidney stone.Somehow, when I tell people I had a kidney stone it feels like I’m informing you that I need to use the little girl’s room (as my mother would say) and it just may be too much information for a blog, but it is what was going on so I apologize if it’s TMI for you.But, there is a reason I’m telling you this part of the story.I called the doctor that day and said, “Maybe I should come in because really, this is making me nuts.”They agreed and offered an appointment for Wednesday morning at 8:30.Clearly the girl at the desk doesn’t know me very well because I try to avoid being anywhere before 10:00 AM, if at all possible.So, I questioned her to see if there were any openings left on Tuesday and sure enough ONE spot was left at 3:30 which gave me just enough time to get there.Fabulous!(Who knew, I’d be busy at 8:30 AM on Wednesday.)So, I went to the doctor, had a CT scan, and followed that all up by going to a Rotary Club event with John.

Adam and Heidi had invited me to be at the hospital when their baby arrived so we could see him right away and perhaps, if all worked well, to hear his first cries from the hallway (though we didn’t know it would be a “he” at the time.) After that, the plan was that I’d stay a few days and help them in the adjustment at home. So, on Tuesday night when I got home I determined that I really should pack up a few clothes so I could quickly leave when the time came. It is, after all, a 4.5 hour drive from here to the hospital where Charlie was born. I would have to say that perhaps God was giving me both the energy and the inclination that packing would be helpful at that moment. In fact, His hand was clear to see from the making of my doctor’s appointment right up to the moment of Charlie’s birth.

In another “amazing coincidence” or “God-cidence” as I like to call them, I got up on Wednesday morning full of energy (which isn’t always the case), threw in a load of laundry, unloaded the dishwasher and was just about to sit down when our phone rang at 8:15 AM. It seems that Heidi’s water had broken earlier that morning and it was “GO time” for their baby. Adam assured me I didn’t need to rush because this was their first baby and well, labors with first babies are notoriously lengthier. While I know that GENERALLY first babies take a little longer, I also know that it isn’t always the case. As it turns out, I DID have plenty of time – more than enough, actually.

Without going into every single detail (which aren’t really mine to share) suffice it to say that Heidi’s mom, Jane, and I are pretty well known at the little hospital in Waupaca, WI.We are the ones who camped out in the hospital lobby for two nights straight.Our first night there, one very diligent nurse made us get visitor badges so, as she put it, they’d know how many people were in the hospital.The comical elements of the badge requirement were 1.) We didn’t need to check out when we left, 2.) The badges lacked in stickiness so never really stayed on, 3.) NO ONE ever looked at us, or the badges, for the rest of the night, and 4.) (This is the best part) We were the ONLY ones in the hospital that night that weren’t employees or patients.On the second night, no one questioned us.Good thing – I was NOT going to participate in that charade again.

So, finally, after more hours of labor than any one woman should have to endure, it seemed that Charlie decided that he’d waited long enough and would indeed make his April Fool’s day appearance.We like to call it Charile’s March 30 and 31 Fool’s day joke.At 4:29 AM, Grandma Jane and I heard “It’s a boy!” from the hall. A few seconds passed as we waited to hear his first cries and once he let out that first wail, we joined him with happy tears in the hallway and a prayer of thanks to God!

Charlie is adorable and this Nana is smitten once again. What a blessing it was to be able to be there last week and sing to him, shop for him (who can resist), change him, swaddle him, snuggle on the couch with him while mom and dad got some rest, and have him stare up at me with the biggest, dark blue eyes you’ve ever seen. I’ve heard it said, and now I can concur, “If I knew having grandchildren was so much fun, I would have done that first!” 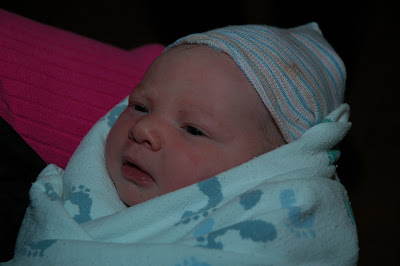