Personally, I think all of my boys are smart. I am, after all, their mother so what would you expect? Last Sunday, however, we experienced a first in the Holte family. Our youngest son, Scott, received his Masters Degree; specifically a Masters of Science in Mass Communication. So, we have documented evidence that Scott is indeed, smart. As you might guess, we are very proud, and thus, I decided to share a few of my pictures with you. And yes, this is just a few.

First off, we headed to the Student Center where there was a reception and hooding ceremony for the College of Fine Arts Masters students. As you can see, Scott is VERY excited about getting his hood. Um, Scott, maybe next time you could give your professor a break and lean down a little. Hopefully, no shoulder surgery will be necessary. 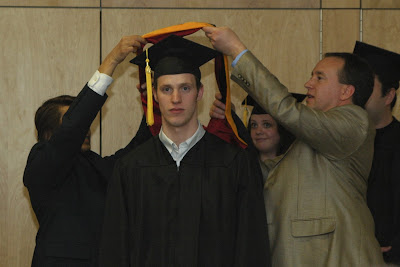 The interim department head explained to everyone the significance of the colors on the hood. The red and black are the school colors and on Scott’s the gold signifies his specific degree. Intriguingly enough, not all of the students getting the same degree had the same color hoods and one man had clearly forgotten to even pick his up. I’m sure his mother was thrilled.

I decided if I ever get a master’s degree, it’ll be in music. Their hoods have pink trim. Enough said.

Congratulatory handshakes from the department heads. (I think that’s who there were.) Scott told me later that they had put the hood on upside down. He fixed it before the graduation ceremony. Apparently, he’d watched the video about the “proper” way to wear a hood! 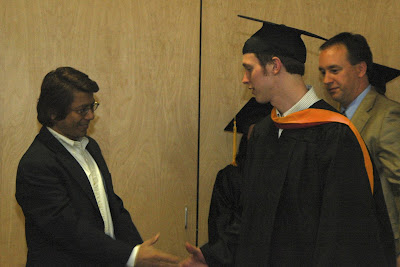 Angelina and Scott after the hooding ceremony. The logo is for St. Cloud State – the college from which he graduated. 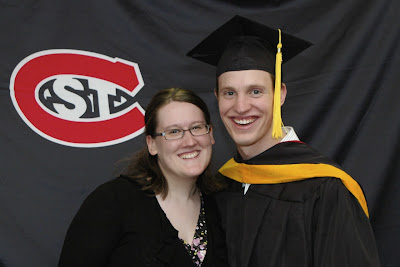 A quick picture with his proud parents before heading over to the commencement ceremony. I’m feeling very short! 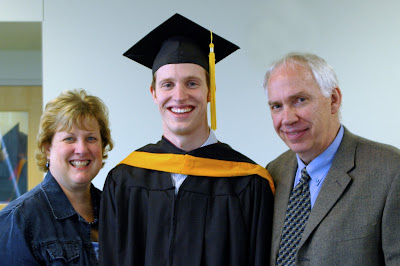 Scott thought the quickest way to get to the Hockey Arena was to walk . . . in the rain. Hmmm . . . By this point, Scott had “flipped” his hood so it’s facing the right direction. It is kind of pretty, isn’t it? 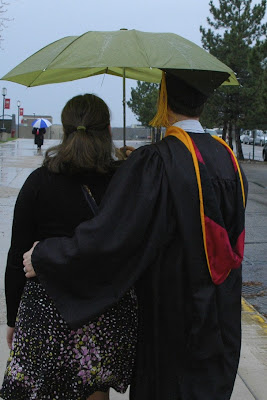 After the two-hour ceremony, we emerged from the building to a beautiful, sunny, afternoon. We headed over to the Munsinger/Clemens gardens in St. Cloud. They are always beautiful. The rest of these pictures were taken there. 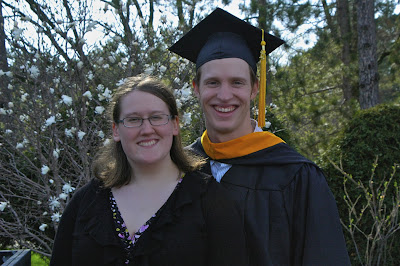 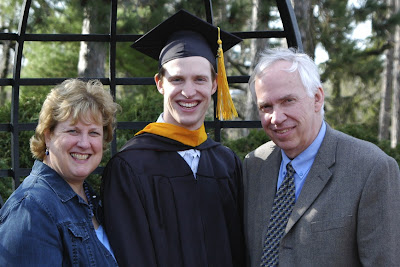 Not graduation related, but pretty nonetheless. 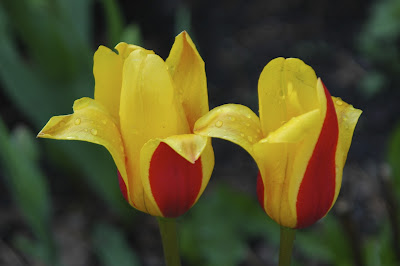 Angelina wasn’t sure how she felt about pictures of him by himself. As she pointed out, he couldn’t have done it without her. :-) 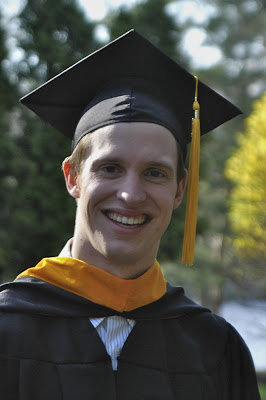 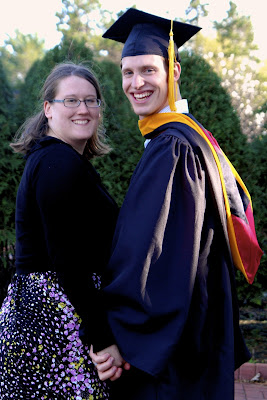