This morning I went in for my first ever MRI; Magnetic Resonance Imaging. I’ve had a sore shoulder for a few months and after trying chiropractic and acupuncture treatments, along with physical therapy, all with little or no success, it was time to pull out the big guns and see exactly what’s going on. My doctor suggested a MRI and thankfully, she suggested an open-sided MRI. Her exact words were, “You wouldn’t catch me inside one of those capsules.”

Now, I’ve had a few friends tell me about their MRI experiences and I must say I wasn’t too excited to follow in their footsteps. There are two main things that everyone mentioned; the extreme noise and having to lie still for an extended period of time. Well, we already know I don’t lie still very well. After my last little foray into a scan that required stillness I informed the doctor NEVER to do that to me again without a sedative.Though a different doctor ordered this MRI she was sympathetic to my restless leg syndrome issue and prescribed a Valium to be taken 30 minutes before the procedure.

Next, I needed to prepare for the noise issue. My friend who’d recently had an MRI said it’s VERY loud and that they had offered her headphones with music. She assured me that I’d want the volume up quite loud to help drown out the noise. I thought to myself, “Well, I have an iPad. I can add some of my favorites songs and use that. And, I own some noise reducing headphones so I’ll just bring my those along. Easy peasy.” Except, it’s been so long since I loaded music onto my iPad that I forgot how to do it so staying up late to accomplish that goal was a total waste of time. Thankfully, there was already some music on there so I decided to just go with that. With that issue under control, I headed out the door at 8:45 this morning. (Do people just not work in the afternoon? Why do my appointments always require a wake-up time earlier than my norm?)

At 9:30 AM I took my little happy pill thinking that with a 9:45 AM show time the MRI won’t actually start until 10:00 AM.(A good guess, by the way.) Five minutes after taking the Valium, my friend who drove me (because they won’t let you drive yourself when you’re “under the influence”) and I visited the restroom before heading into the Imaging Center.After washing my hands, I wiped the excess water off of the counter with my paper towel and then THREW IT INTO THE SINK!I’m sure they’ll be happy I “tidied up” for them.Fortunately, I figured out the error of my ways and moved it to the trash can.Only five minutes in and I was already loopy. I looked at my friend and said, “Oh, this could get fun!”

Soon enough the technician called me back to start the procedure.I explained that I’d heard the machine was very loud so I brought my own music and headphones; would that be o.k.?She then explained that the magnetic field on the MRI machine was quite strong and would, in essence, turn my iPad and headphones into worthless pieces of junk.Hmmm. . . good point. BUT, she also assured me that the open sided MRI wasn’t as loud as the closed capsules, and I could choose any FM station I wanted or choose between a couple of CD’s. I went with the local Christian radio station.The way I figured it, if there was ever a time I’d need a little encouragement, this would be it.

I got ready and laid down on the table as the tech explained to me everything that would happen. Now here’s the great part; the whole thing was a piece of cake. She got my shoulder all lined up and told me to try not to move that area, or any part of my body while the machine was running, but she’d give me time between “pictures” to move my legs and scratch my nose (which ALWAYS seems to start itching at the exact moment I hear the words “don’t move.”) The longest period of time I ever had to hold still was 6.5 minutes. Had I known that I could have skipped the Valium.

There was some noise to be sure. When it first started I’d hear this sound which mimicked a rock band warming up and then a “boing” or two followed by something akin to a jackhammer working in the distance but none of it was so loud that it was bothersome. I actually found the “boing” a bit humorous and almost started laughing, but that would, of course, cause movement.

During the last two rounds of pictures, I actually fell asleep. Thankfully, the jolt I experienced as my snoring woke me up didn’t blur the picture.

After I was all done, and putting my shoes back on I asked the technician how this whole MRI deal works. She started talking about magnets, radio frequencies and hydrogen protons at which point she lost me. Maybe without the Valium it would have been easier to concentrate – but I doubt it. We both agreed that whoever invented it was both very smart, and is now, most likely, very wealthy.

And, of course, I got a picture. 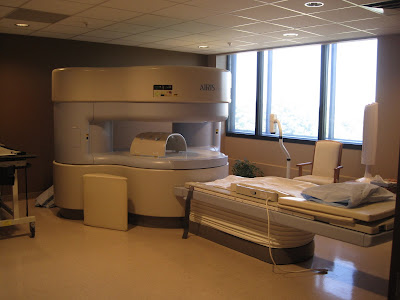 If you ever end up needing an MRI, do not fear; but ask for the open-sided one, and leave the earphones at home.