I am posting this on Saturday night in Switzerland. There is so much more to tell you but I have to get to bed. Following is a recap of our two days in Moldova. All I can say for now is that Switzerland is amazing and I will probably have to post the rest of my blogs when I return home as internet use is incredibly expensive.

I could write a book on our two days in Moldova. If you’ve been checking for my blog update you have probably guessed we did not have internet access in Moldova. But, we did have ducks and chickens; grapes and tomatoes right outside our door. Oh, and a rooster who obviously has not been schooled in the proper crowing hour.

We arrived in Chisano (pronounced Kish – ah – now) on Wednesday afternoon and spent most of the day getting to know our host and being briefed on what we’d be doing there.

The goal of the group we worked with is to help prevent kids from becoming victims of human trafficking therefore the majority of our time was spent going to schools distributing pamphlets with information on how to avoid getting caught up in the trafficking web. It’s a huge problem in Moldova because of the low income level. When a person is desperately poor and can’t get a job, he/she is a prime target to be trafficked. The unemployment rate in Moldova is nearly 65%!

Every week there are 22,000 victims of human trafficking worldwide. Only 1% of the victims are ever rescued so keeping them from being trafficked in the first place is key. It’s an overwhelming problem with no easy solutions. The things I learned would make your blood boil – at least I hope it would – but it’s too much to share here.

One of our stops on Thursday was at a state run orphanage. The young children came right over to meet us as soon as we got out of our van. What amazed me was that when our friend in Moldova pulled out toothbrushes for the kids they flocked to get them as though he were giving away gold bars. While at the orphanage we gave a trafficking prevention presentation to the older kids – probably the most at-risk group of teens for trafficking.

There was one little girl at the orphanage that reminded me of a little girl we met in Russia two years ago. She was quite eager to talk to us when we first arrived and loved having her picture taken. As we left I went to give her a hug and she kind of pulled away from me. I realized later that she very rarely has any kind of loving touch, or really any kind of human touch at all and probably didn’t know what to think when someone touched her in a kind way. (Either that or she just didn’t like me.) Heartbreaking.

It would be easy to get overwhelmed with the sadness, and vastness, of the problem but fortunately we were able to see the upside of things also. After leaving the orphanage on Thursday afternoon we drove to a transition home for girls. That is another project that our hosts support. The transition home was amazing. There are eight girls living there, along with “parents.” It isn’t a big house but it is filled with lots of love. In this home, and all of the transition homes that are built, the “parents” are a local pastor and his family. When asked how living in this home has made a difference in their lives the responses were things like, “I finally have a family,” “Now I have hope,” “Now I know what it feels like to be loved.”

In the transition homes the girls are taught basic skills such as tailoring, cooking, gardening, etc. These skills not only help them learn how to care for a household, but also enable them to get jobs so they can successfully support themselves. And, if the girl has a dream to go to college or to get some trade school training they try to find scholarships for them. I didn’t really notice it at the time but one of my team members pointed out that the home for the girls is probably a bit nicer than the conditions of the homes of those who actually built it. I think that says a lot about the care they offer the girls.

If you read my pre-trip blog you might remember that I had some concern (translate as “scared to death”) about the home we’d stay in during our time in Moldova. I was even more concerned as we were being driven there on Wednesday night. It was dark and we were driving on dirt roads better suited for a four-wheeler than a small sedan filled with four people and 150 pounds of luggage. I looked over at Pastor Lisa, who was going to be staying at the same house with us and said, “I think this would be a good time to break into the chorus of ‘I Surrender All.'”

I have to say I’ve stayed in worse places – and better places. Our hostess didn’t speak a lick of English but, despite the fact that she cares for a husband who as far as I could tell is basically dying and hasn’t left his bed in three years, was incredibly gracious and cooked us a huge breakfast every morning. She has so very little yet offered us so very much. Before we left she gave Pastor Lisa and I table runners made her grandmother. It was incredibly humbling. The picture here is of Nadia, our hostess, and me in my anti-trafficking t-shirt. 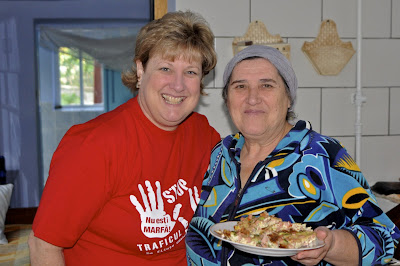 Well, I have rambled on long enough and yet only touched the surface of all that happened during our short Moldovan visit. Despite the lack of creature comforts that I am used to I would do it all again if it just keeps one girl or boy from getting caught up in trafficking.