Well, we’ve been home for five days now and I’m just getting around to posting my blogs from the trip. I’ll try to post one each day for the next few days until you’ve “heard it all.” Since I’m posting these from home and not during our trip I’m able to post the pictures along with the story. It takes a bit longer to add the pictures, having to choose and edit the pictures; thus the delay. This blog is about our first day in Switzerland – Saturday, September 17.

800 miles – that is the approximate number of miles that we walked today. Thankfully, there was plenty of chocolate to keep us energized. We were met this morning by Joel, the son of the pastor that we will be working with here in Zurich. Due to a scheduling mix-up, we won’t actually see the pastor until church tomorrow. So, Joel, and his fiancé, Nicole, met us and showed us the city.

We started off by taking a train to downtown Zurich and then a tram (similar to our light-rail in Minneapolis) to Uetliberg which, according to the sign on the building there, is “The Top of Zurich.” Granted, the hike to the top was, shall we say, challenging, for some of us but it was well worth it, The view was beautiful despite the fact that it wasn’t a very clear day. Pictures hardly do it justice, but as you might guess, I tried. 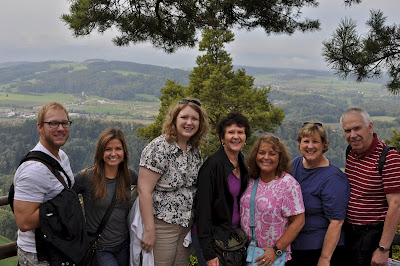 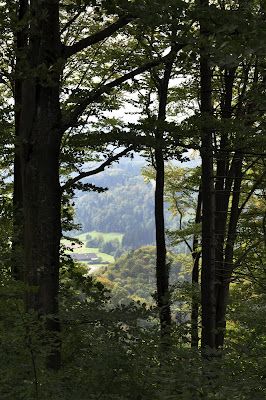 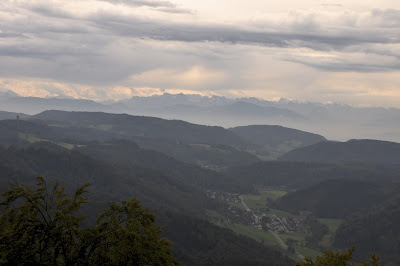 Of course, all that walking wore us out so we needed to stop and have something to drink before catching the tram back into the city.

By the time we got back into the city it was time for lunch but instead of spending a lot of time at a restaurant we all voted for pretzels – the giant kind that you can get at sporting events only WAY better. I know you may find this odd, but as good as the chocolate is here, I think the pretzels are my favorite. They even make sandwiches out of them, with pretty much any kind of sandwich meat you could imagine. 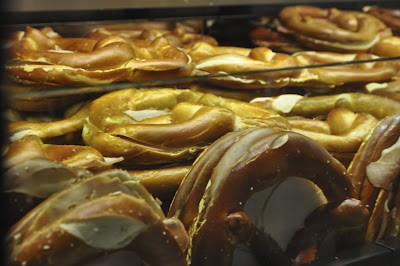 After “lunch” we did a little shopping, focusing our efforts on getting some yummy Swiss chocolate because, as you can imagine, we were starving at this point. We hit up the expensive chocolate store first and later went to the “grocery store” for some more reasonably priced chocolate. I say “grocery store” but in reality it was a department store with a “grocery” department. Come to think of it I don’t recall ever seeing what I would consider a “real” grocery store. 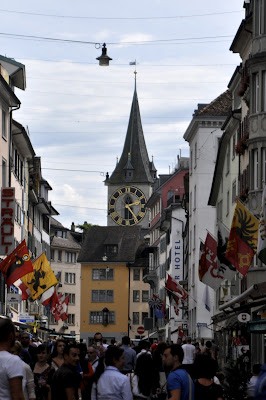 With chocolates in hand we continued to window shop on the Zurich equivalent of Rodeo Drive. At one point we ran into a full concert band performing on one of the streets and as we finished up our “shopping” some of us sat on a bench by a fountain to wait for the whole group. I was aghast when I saw a woman hold her son up so he could get a drink out of the fountain “spout.” Apparently, the water in the fountains is safe to drink. I however, have not tested that personally. Pretty sure I won’t. 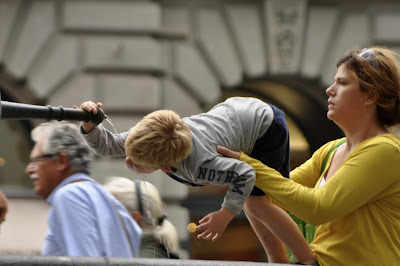 We saw two churches that were right across the river from each other. FrauMünster Church was built in 853, and was beautiful. At one point a fire destroyed a part of the church so it was renovated and some of the stain-glass window were replaced by more modern windows designed by artist, Mark Chagall. 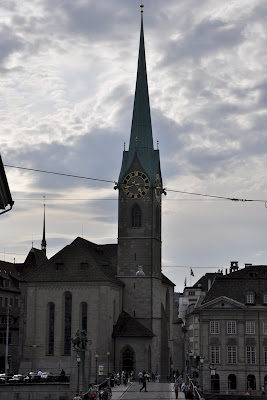 The second church we visited, GrossMünster, has quite the intriguing history. It was built by Zwyngli Platz during the days of the protestant reformation in the 1600’s. Unfortunately, Zwyngli was a bit nuts and, in an effort to eliminate the corrupt Catholic priests he’d take them up in the bell tower and throw them out the window. I can say with pretty much 100% certainty this was NOT how Jesus would have handled corruption in the church. Nonetheless, it was a beautiful church. 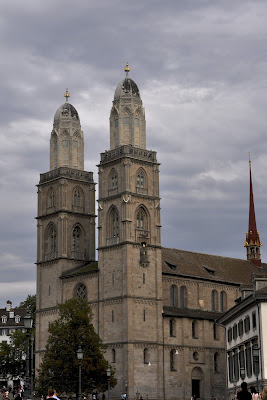 After a stop for dinner at a fabulous Italian restaurant we headed down to a park along the waterfront. In the background of this picture you can see both FrauMunster church and the giant clock. 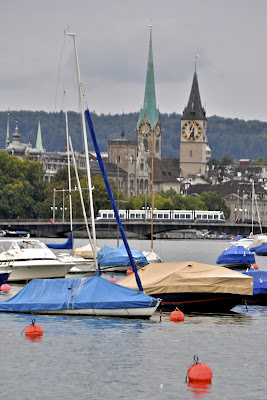 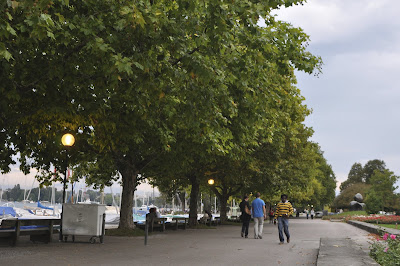 There is a little pond at the park with stepping stones across it. Most of the stones are placed so that anyone, really, can walk across them without much effort. But some of the stones are placed further apart either for design or so that one 20-something man (say, Joel) could dare another 20-something man (say, one of our team members, Heith) to jump across them. (You know where this is going, don’t you?) It appears that it’s difficult for a 20-something man to say no to a dare such as this and once the jumping and momentum got going, well, it couldn’t be stopped . . . until Heith landed in the pond, just shy of the fourth stone. I know it’s wrong, but it still makes me laugh. Thankfully, his injuries were minimal, and we expect his shoes will be dry sometime before we leave. 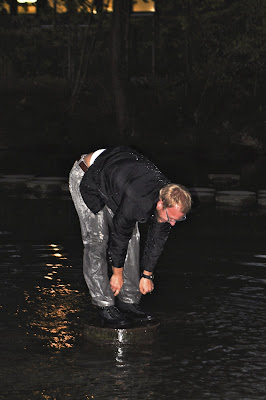 Our return to the hotel consisted of three forms of transportation – four if you include our feet; boat to tram, tram to train, train to hotel shuttle from the airport. It’s a great system which would be even easier if only I knew German. So far, I love Switzerland.