I apologize for the lag in my blog. I’ve been sick. I’m writing this on Saturday, October 1 about our time in Lucerne on Monday, September 19. I figured I’d better hurry up or my brain will get a little fuzzy.

We didn’t actually anticipate having a lot of touring time in Switzerland but that is how things worked out. Nothing was really planned for us on Monday so we took a vote as a team and decided to do a day trip (at our own expense) to Lucerne. What a stunning place!

We started with a train ride through the Swiss countryside, from Zurich to Lucerne. After we arrived in Lucerne, and spent $2.50 to use the “clean” toilets at the train station (a marvelous example of free-enterprise), we had a little time to walk around and see the city before departing on a boat ride across Lake Lucerne.

The 669 feet wooden Chapel Bridge over the Ruess River has been a landmark in Lucerne since 1333. A large portion of the bridge was damaged in a fire in 1993 but has since been rebuilt and is still beautiful. I wonder whose job it is to water the flowers that line each side of the bridge? From a distance they are so perfect you almost think they are artificial flowers; but they aren’t. 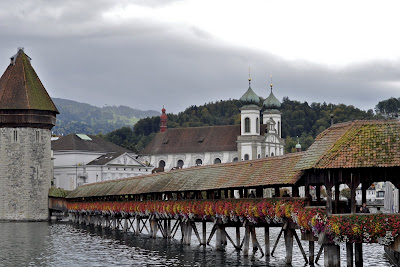 You’ll be able to tell by most of my pictures that it wasn’t a warm, sunny day for our visit to Lucerne but we did not allow the clouds and rain to dampen our spirits. Views are always different when it’s raining but there was still plenty of beauty to go around. 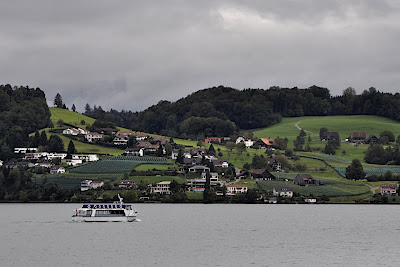 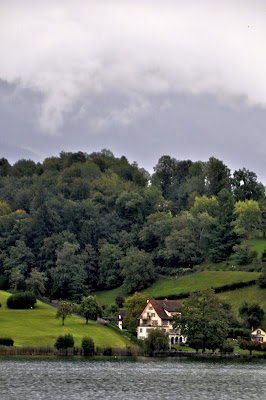 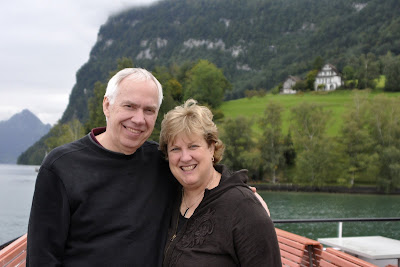 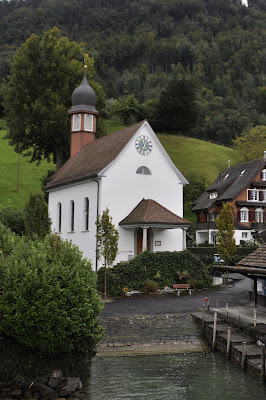 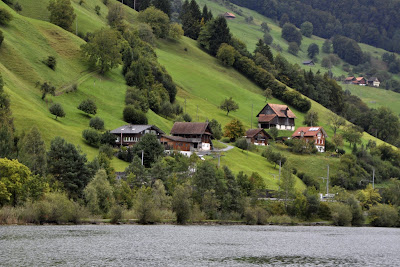 After our 1½ hour boat tour we got off in Alpnachstad to board the world’s steepest cog railway. Basically, the cog is a gear on the underside of the train that hooks into a rack on the track allowing the train to scale heights at a steeper grade than a normal train would be able to. The cog train from Alpnachstad up Mount Pilatus climbs, at some points, a grade of 48%. Mount Pilatus by the way is named as such because local legend teaches that Pontius Pilate hung out there after he sentenced Christ to death and was later buried there. Who knows if that is true or not? 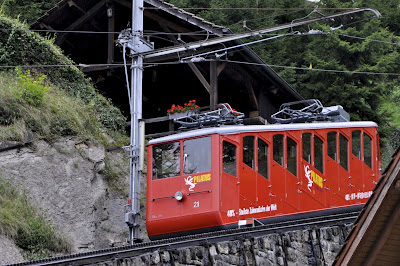 Although it was raining the views up the mountain were spectacular until it started to snow. I will confess that I would have preferred a bright, sunny day offering plenty of vistas to take in but I wasn’t the only person to consider in this expedition. Sitting across from us on the cog train was a girl from Brazil. She had never seen snow before and the look on her face when she first spotted the beautiful flakes was priceless. She was SO excited and thus we cheered with her.
By the time we reached the top of the mountain I was either sick from altitude or from turning my head so many different directions trying to “see it all.” But, thankfully, I recovered in time to have schnitzel for lunch, which I found out is basically a piece of pork pounded flat and fried. YUMMY!

There are two hotels built on top of the mountain; one built in the 1890’s. I am amazed at how they were able to build such a huge structure on top of such a tall mountain so many years ago.

Going back down the mountain provided another type of experience. We started off in a aerial cableway which is different than an aerial panorama gondola; although other than the size and seating, I couldn’t explain the difference to you. In the cableway we stood and the ride only took us a little way down the mountain where we then boarded the gondolas. Both were the smoothest gondola “type” trips I’ve ever been on. It was as though we were gliding through the air in hot air balloons. 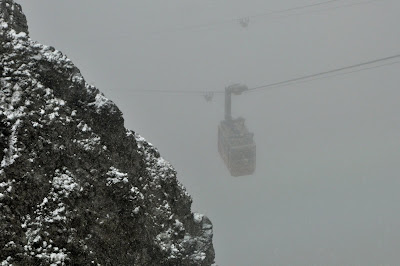 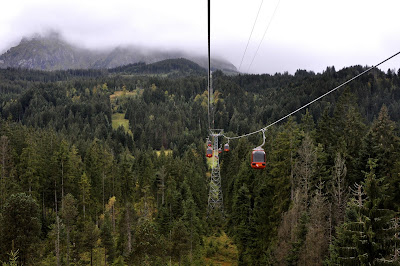 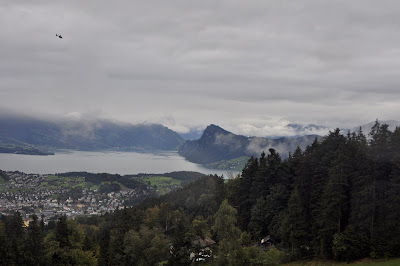 This is going to sound strange, I know, but the highlight of the day came as we were gliding down the mountain. John and I were alone in the gondola and all of a sudden I heard this beautiful melodic sound. I know John can’t sing like that and I didn’t see any speakers in the gondola so I wondered where it was coming from. I glanced below us to see a field of cows munching on the grass, all of whom had bells around their necks. That’s what was making this beautiful sound. Apparently, each cow’s bell has its own tone so, when they are all moving about, the combination of the sounds creates a little concert. The lady in the gift shop at the bottom graciously answered all of our questions about the bells which I’m sure she answers a hundred times a day. 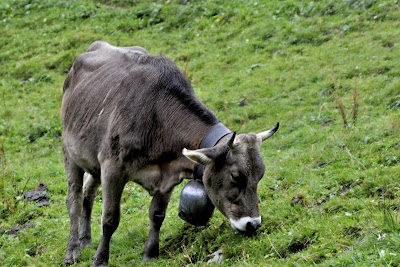 After we reached the bottom of the mountain we took a bus back to Lucerne (as we’d ended up in Kriens a few miles away.) There we did a little shopping, walking around (sometimes in the rain), and enjoyed a fabulous dinner before heading back to Zurich.

We saw lots of little ones on scooters like this one. So cute. I found it interesting that this mom led this little guy over to some steep steps. How she was planning to get down those steps with a stroller, a scooter, and a toddler I’ll never know. Pastor Lindsay went over to help them out. 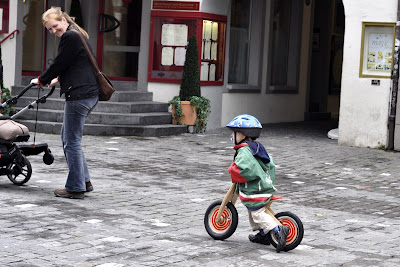 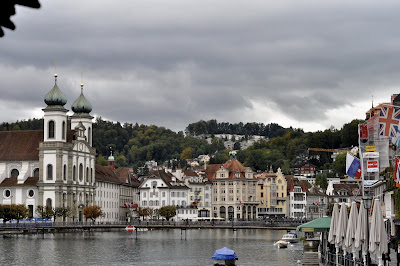 What a great day of enjoying God’s amazing creation!