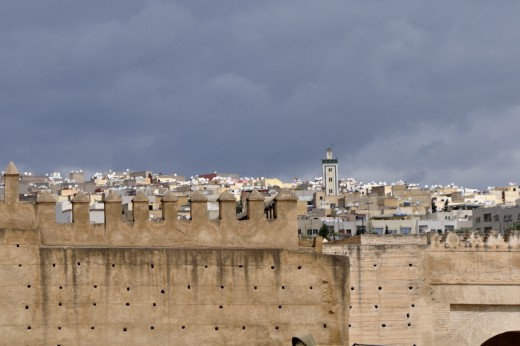 Fez is one amazing very old city.  We started today with a tour of some of Fez’s highlights. It was so fun to have a guide who knew his way around and got us into some places that we could not possibly have found on our own. 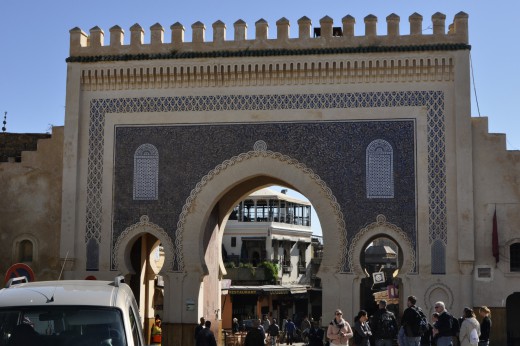 First off, I’d like an aerial map of this city.  There are over 9000 streets in this walled city built in 808 AD.  As far as I could tell there weren’t any street signs but I guess, to be honest I was trying to keep an eye on our guide and didn’t look for them.  I think if you’re looking for something your directions might sound more like “turn right at the fig stand, left at the nougats, then straight past the sheep heads.”  And no, I’m not kidding about the sheep heads; we did indeed see sheep heads for sale.  I’ll spare you the pictures.  Don’t ask me what they do with them; I don’t know and I’m pretty sure I don’t want to.

No cars are allowed inside the city of Fez so everything from produce to propane is delivered by mule, donkey or a cart.  The buildings that make up the city are three or four stories high and the streets are narrow – maybe eight to ten feet wide.  It’s kind of like if you took New York City, got rid of the cars and shrink-wrapped it.  When animals or carts are moving in the streets it’s the job of the pedestrians to move out of their way – and you might just have to dodge some droppings while doing so.  It was a cultural experience like no other. 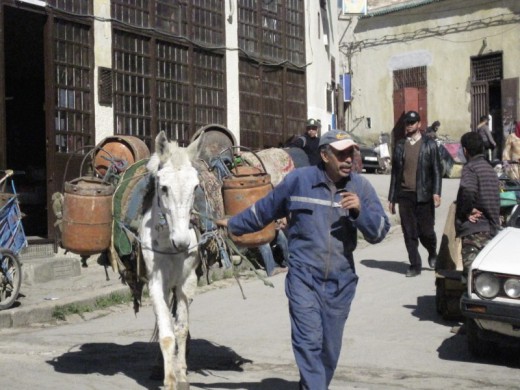 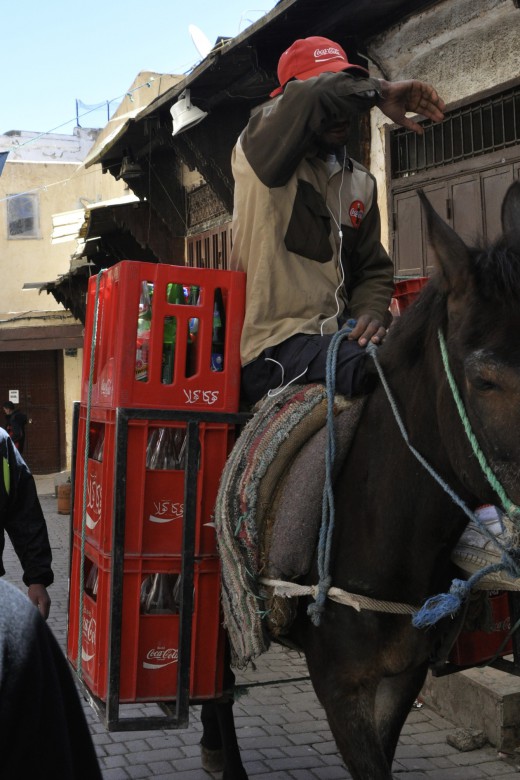 Shy guy or part of a witness protection program?

There were four highlights on the tour.  We visited a pre-school with about eight kids in attendance.  The school was inside of a small room – maybe 13 x 13 at best, the kids sat at desks and it didn’t appear that there was a playground anywhere nearby.  Nonetheless, the kids were adorable and sang songs to us and recited the five pillars of Islam to us like they’d been born knowing them.  Interesting. 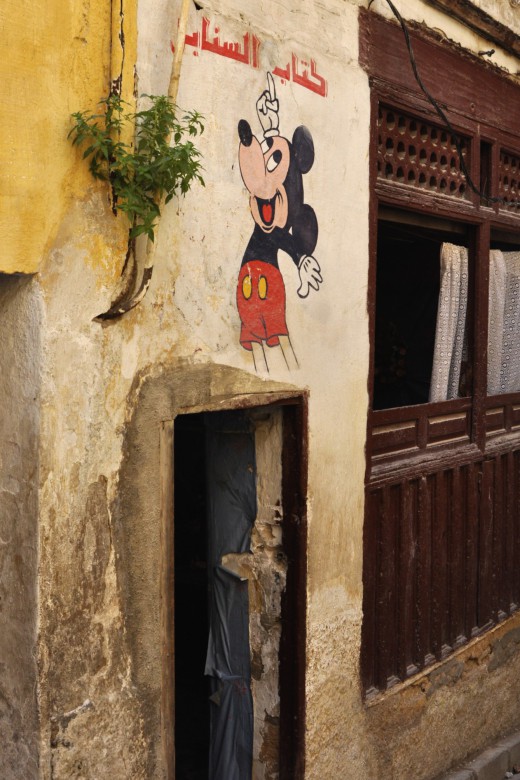 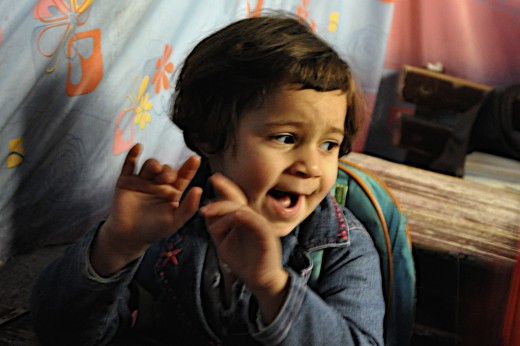 Of course, visiting a mosque was bound to be on the agenda.  Our guide told us that there are five things you’ll find inside of a mosque; a fountain (or some sort of water), marble, mosaic, plaster and carved wood.  I have to say, however, that I’ve tried to find this information online and can’t see it so I don’t really know if this is true.  One thing I have learned over the years is that sometimes guides make stuff up. 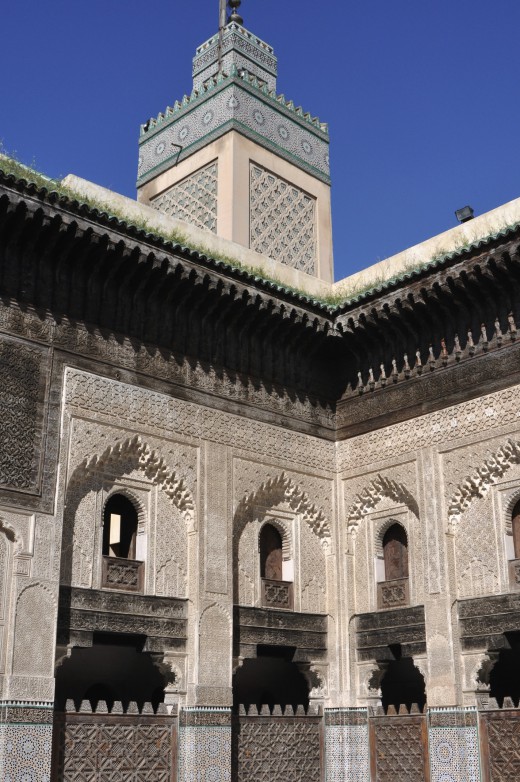 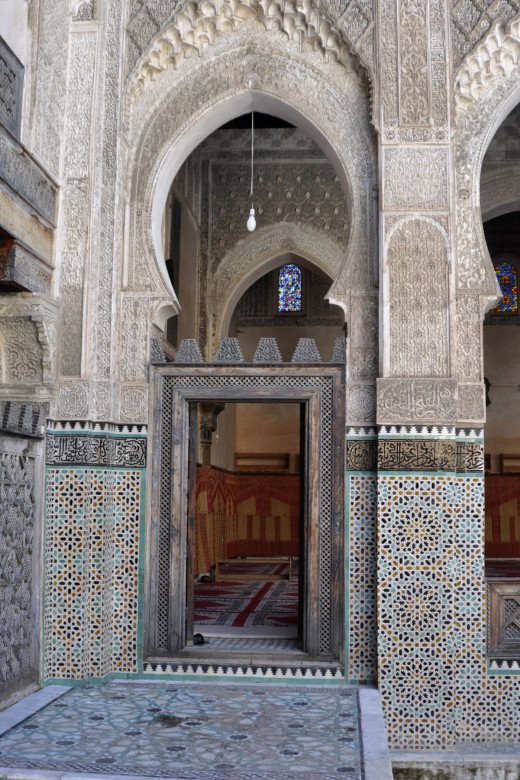 We also stopped at a weaving shop where we had the chance to watch scarves being made and make a few purchases.  After they demonstrated the loom for us they put scarf turbans on everyone on our team for a photo op.  I was in awe of how fast they were able to do so many different styles of wraps and match the color with each person’s outfit. 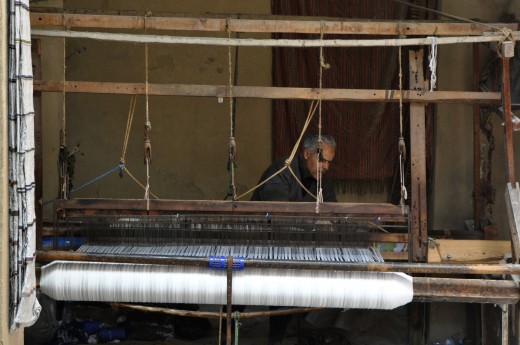 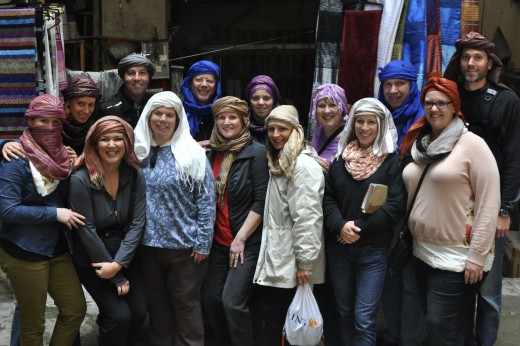 Here’s a little tip I’d like to share with you; if someone ever offers you a sprig of mint either take it and stick it directly under your nose, or run the other direction as quickly as you can.  We were starting into this little shop when I guy offered me a sprig of mint and I tried as nicely as I could to refuse it.  To be honest, I thought he wanted to sell it to me; but he was insistent that I take it.  Little did I know it would be my only link to a pleasant smell for the next half hour.  We were entering, it seems, a leather shop, which conveniently overlooked the local leather tanning operation.  STINKY! 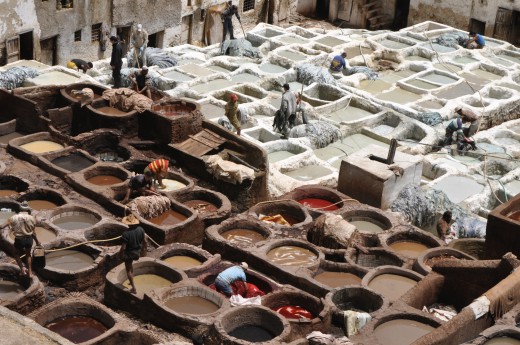 I really can’t tell you everything the guy told us about the leather tanning operation but when he mentioned pigeon droppings I questioned him on it, for clarification purposes.  “Pigeon droppings?” I said.  And he replied, “Yes, pigeon droppings, as in pigeon poop,” as though I didn’t know what droppings were.  Apparently they are used to help make the leather soft and supple.  Think about that the next time you buy a pair of shoes.  I found this video online which is really pretty intriguing and shows the life of a worker at the Fez Tannery. 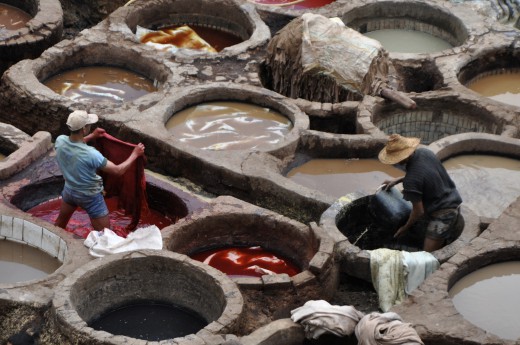 Our tour ended with some time for shopping and some lunch.  It was an experience that I’m glad I didn’t miss but I’m not feeling a strong need to repeat it any time soon, either.

We left Fez on Tuesday morning to begin our trek back home.  We stopped back in Khemmiset for lunch and then headed to Casablanca for a farewell dinner at Rick’s Café, made famous by the movie, Casablanca.  What an amazing trip! 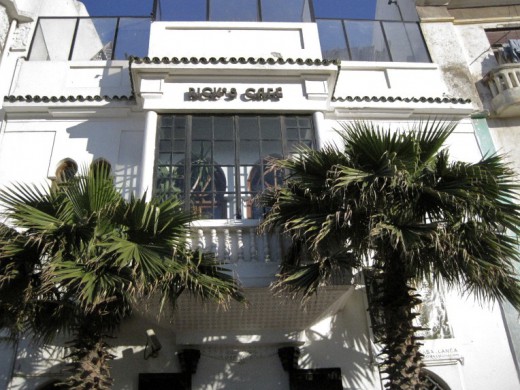