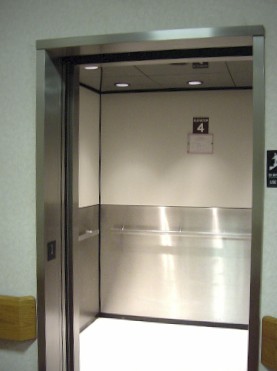 I recently went to Panama on a mission trip. One thing I learned is that automatic doors work a bit differently in Panama than they do in the United States. That’s my story, at least.

Admittedly, my first automatic door experience was more operator error than a difference in culture. I was with a team of mostly women; we had just picked up our luggage and were loading the bus. Two girls were missing so our team leader went to search for them. Of course, about 30 seconds after she left the bus, the two girls arrived. But now, our team leader was missing. I thought to myself, I’ll run back into the airport, look quickly and if I don’t see her I’ll head right back to the bus because as we all know; if one person keeps looking for the other the cycle can go on for hours.

I went through the doors into the airport, took a quick glance in each direction, didn’t see our team leader and turned around to walk back through the doors I’d come in. They started to close on me and, thinking they were akin to elevator doors, I put my hand out to stop the door from closing. It was instinct, I suppose. What wasn’t instinct was to actually get in a fight with said doors. They continued to close and I immediately decided I’d have nothing to do with that. I took both hands, and with one on each door, I forced them open. There was another guy trying to go out the doors also (which turned out to be “enter only” doors.) At first he just looked at me like I was crazy but eventually he decided to join in the effort. We won.

A couple days later I was standing in the elevator of our hotel. A hotel employee was on the elevator with me and had gotten out to go tend to something on whatever floor we were on. Just as the doors were starting to close I saw a couple of my team members, so I quickly stuck my hand out to hold the elevator doors for them. I hold elevators for people this way all the time. Only this elevator door would have nothing to do with that kind of nonsense. They CLOSED on my arm and refused to open. My arm was stuck and stuck well. I couldn’t move it in or out, up or down. I had a pretzel in my hand but I was NOT going to let go of it until I determined there were no other options. I mean seriously, it had peanut butter on the inside! I wish there was a picture because I’m sure that my arm sticking out of an elevator door desperately clinging to a pretzel looked pretty funny.

Being as my brute strength had worked in opening doors before, I asked my team members to please try to see if they could pull the doors apart. The doors didn’t budge. At this point I was afraid I might actually have to drop my pretzel. I really don’t know why I thought that would help. It’s not as though letting go of my pretzel would make me stronger than my teammates. I guess I just thought it looked kind of crazy to hang on so tightly to a pretzel when one’s life was in peril. I was seconds away from opening my hand and releasing my pretzel when the hotel employee who’d come up the elevator with me showed up exclaiming, “Oh my goodness! Push the button!”

The button? Which button? There were six floor buttons, an emergency button (which I was seriously considering), and a button that said “AP.” Though I didn’t know that AP stood for “abra puerta” (translating to “Open Door” in English) I pushed it anyway because that seemed the most logical – way more logical, it seems, that letting go of my precious pretzel.

I heard later in the week that one of the male team members had both hands full when he decided to “hold” the door for someone approaching the closing elevator doors. He used his head to stop them. That would most definitely have been an even better picture than me standing there gripping my pretzel as though it was my last meal.