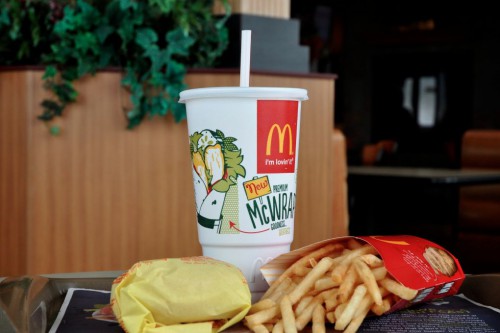 We stopped at a fast food spot for lunch the other day. Though normally I try to eat a little bit healthier than that, sometimes it’s just a necessary part of life when traveling from one spot to another. I mean, when you’re trying to get to your grandchildren, slowing down to eat at a healthy restaurant just seems like a tortuous activity.

As we were finishing up our meal, one of the employees noticed an elderly couple were done eating and graciously offered to remove their tray for them and throw away the leftover wrappers. It was then I started smiling, and then laughing a little. Once my husband asked me what I was laughing about, I had to cry for a bit before I could tell him.

You see, that employee’s kindness reminded me of my grandparents and their first trip into McDonald’s in the late 70’s. They have long since passed, which is where the tears came from, but remembering my grandmother’s telling of the McDonald’s story still makes me laugh. My grandparents, you see, were not fast food kind of people. Granted, they did enjoy a good burger at Kansas City’s famous Winstead’s Drive-In now and again. But, most of the time, their dining out was done in nice restaurants: the kind with fine table linens and a highly trained wait staff.

They’d heard a lot about McDonald’s. It was still a relatively new phenomenon in the Kansas City area where they lived and one day, on a whim, they decided to check it out. So, they drove to the local Mickey D’s, walked in and sat down anticipating the arrival of a waiter to take their order. He never came, of course, so eventually they spotted someone who obviously worked there and asked for some direction. The “young man” (according to my grandmother) was very sweet and showed them the order board and where the line was for ordering. Of course, then they had to figure out what they were going to get. Once they placed their order, and the tray was placed in front of them, the sweet young man reappeared and helped them take it to their table. Clearly his mama had raised him right.

I’m not really sure who disposed of their garbage at the end of the meal, but I do know they found the whole experience something akin to visiting a foreign country. My grandmother said the food was pretty good, but I’m fairly certain it was a one-time visit. I mean, why go to McDonald’s when there is a Winstead’s just blocks away?