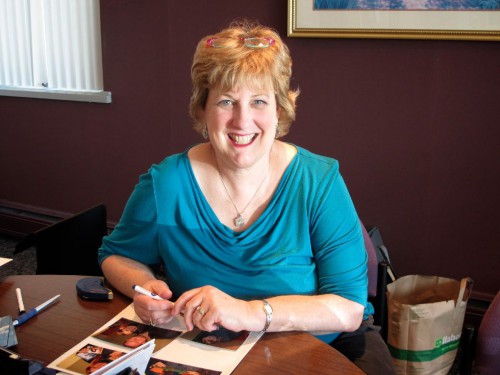 I spent the last three days at a scrapbook retreat. It has been a long time since I’ve been to a scrapbooking retreat. In fact, the last retreat I attended was delightfully interrupted by the unexpected early arrival of our first grandchild just over two years ago. I had forgotten how much I enjoy the time away to work on my albums.

Some would call scrapbooking a craft with paper and stickers and the like. In fact, I’d say I used to be a somewhat “crafty scrapbooker” but my craftiness has always paled in comparison to some of the pages I’ve seen done. And, to be honest, I’ve never been a fan of the overly decorated albums. I used to sell Creative Memories products and even back then I always preached, “focus on the pictures!” I never want someone to look at my scrapbook and say, “Oh, what a cute page!” I want them to say “Oh, what a cute child”, or “what a beautiful family.”

This weekend some of the pictures I worked on were from my father-in-law’s 90th birthday in 2008 (I’m a wee bit behind.) As it turns out this event was also the last time I saw my mother-in-law, as she died just a month later. While I was looking at the pictures there were so many memories that came to mind; the way my mother-in-law had soft, somewhat chubby hands, and how she’d always grab my hand when we were together. I also remembered the way she loved cake! Even though she was diabetic she just could not resist a good piece of cake. Who can blame her? As I put those pictures in my album I was able to write down those memories so I won’t forget – and so my children won’t forget.

Lest you think I’m in the middle of a big Creative Memories sales pitch, I assure you, I’m not. No one is paying me to say this. It’s actually been on my mind a lot lately because I recently heard about two young friends who have lost all of their pictures due to computer mishaps. ALL OF THEIR PICTURES; the ones of their children’s birth, family times, birthday parties – everything – gone!

Digital photography is an amazing innovation. I’ll readily admit I enjoy the ability to take countless pictures without changing the film. There’s a tour guide in Australia who’s probably happy about this, too, but that’s a story for another day. I enjoy being able to edit my photos so they’ll look as good as they possibly can and I even enjoy being able to remove annoying things from the pictures. But, we can’t rely on the computer to preserve our memories.

Can I just offer a couple of tips here? I said in January that I’d post a tip every month and though I’ve failed at that miserably, please consider this your tip for April. First off, if all of your pictures are digital – BACK THEM UP! Store them on disks, copy them to an external hard drive, put them on a second computer or upload them to a storage website.

Once you’ve got them backed up – PRINT THEM! You don’t have to print every single one, but at least print a few of them. And, after you’ve got them printed, PUT THEM IN AN ALBUM. I don’t care if it’s a pocket page album, a paper album or even a digital album, but get them safely tucked away someplace.

Don’t think of it as scrapbooking – that conjures up the whole crafty idea. Think of it as preserving your family’s heritage. Hmmm . . . scratch that, it sounds overwhelming. Let’s try this – consider it memory loss prevention. Put the pictures in an album and take a few minutes to write down whatever it is you want to remember about them. Because as much as you think you’ll never forget – you will.