Last week my husband and I went to California to celebrate my dad’s 85th birthday. We flew in a couple of days early and added a little mini-vacation alone onto the trip. One of my husband’s favorite things to do in California is to drive along the ocean. And, in an odd twist of fate, it happens to be one of my favorite things to do, too. So we decided that since we were going to be out there anyway, why not take some time and really enjoy the drive.

Our trip wasn’t really long by comparison to the entirety of the Pacific Coast Highway. We drove from Monterey to Cambria, California, a distance of just 103 miles. It is my opinion, however, that this is one of the prettiest sections along the coastline. Being as my parents live right outside Monterey I’ve obviously had opportunity to drive along the coast in this area before. It’s always beautiful, regardless of the weather.

I mentioned on Facebook that we were making the drive last Tuesday and a friend of mine wrote that driving along the Pacific Coast Highway was on her bucket list. It occurred to me when I read her comment that perhaps I took my opportunity a little bit too much for granted and determined to enjoy the trip even more and take plenty of pictures to share with my friends who may not have the opportunity to visit the west coast. Although personally, I think this particular trip should be on everyone’s bucket list unless, of course, you hate the ocean, or get car sick rather easily, or don’t really care for curvy roads, because there’s a lot of this: 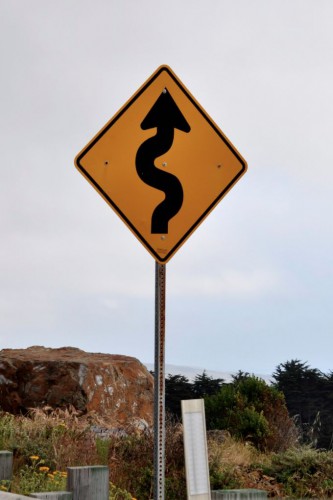 But, for me, the great thing about doing this trip with John was his willingness to stop frequently – and by frequently I mean REALLY FREQUENTLY – to take pictures so it would be hard to get car sick when taking a break every 15 – 30 minutes.

The next picture is actually in Monterey and was taken the day before we left on our trip. Technically, it’s not on California Route 1 but it’s too pretty to leave out. Besides, you HAVE to go to Monterey if you’re in the area. 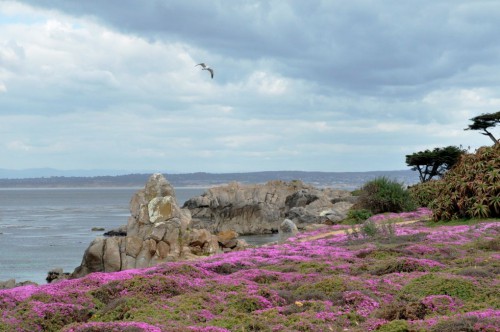 The other MUST DO if you are in California to make this trip is drive along the 17-mile drive through Pebble Beach. I mean seriously, you wouldn’t want to miss this, would you? 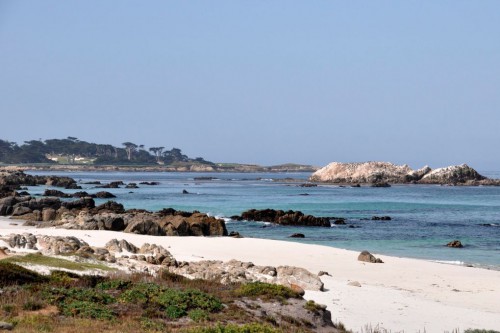 O.K., from here on out all the pictures are actually ON the PCH. What you can’t see in this first picture is the sea otters playing in the water but they’re there. When I blew this picture up I counted at least six in the picture. Did you know that sea otters spend about five hours a day grooming themselves to keep their fur fluffed up which is what keeps them warm? Perhaps if I spent that much time grooming I’d be as cute as a sea otter. 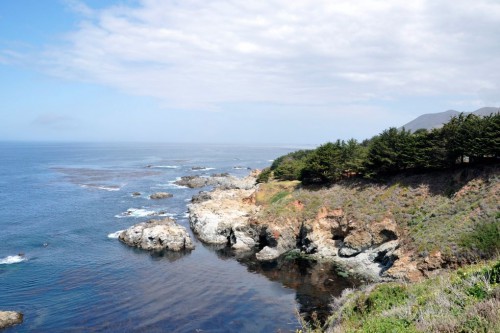 Look at the amazing colors in the water on the next picture! 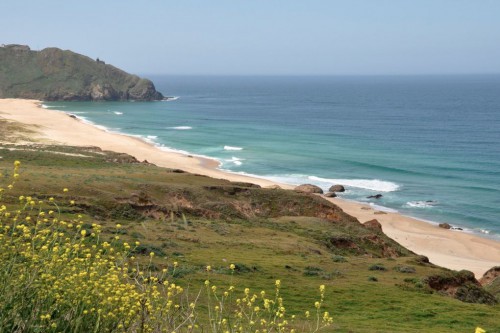 The California Poppy is the state flower. It’s everywhere this time of year. Well, everywhere in California that is. This particular picture was taken at the restaurant where we had lunch – overlooking the Pacific ocean. Beautiful! 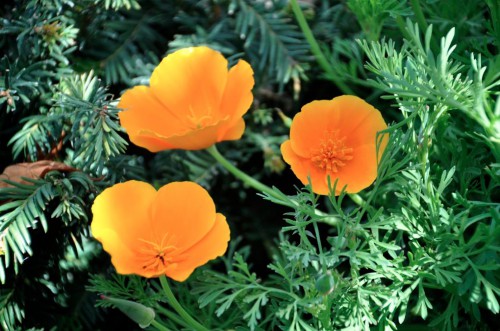 “Nancy! Get away from the edge!” was John’s constant mantra when I was drifting too close to a precipitous drop such as this. He’s not fond of heights and trust me, I’m not fond of falling so I was never so close that it was actually dangerous. 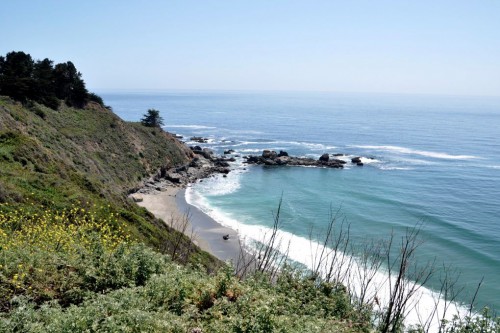 Sometimes the people are as interesting as the view. We had a fifteen minute wait for some road construction. Apparently, this guy thought the waiting would be more fun OUT of his car. I took this picture through my rear-view mirror. 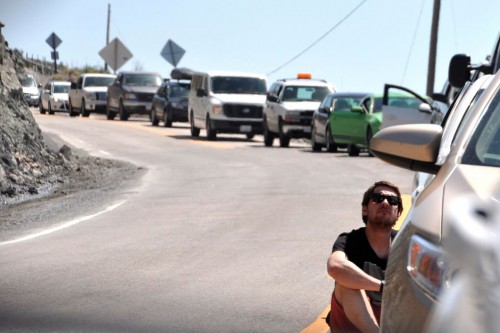 Look at those gorgeous flowers! This was the entrance to something; I not sure what, however. 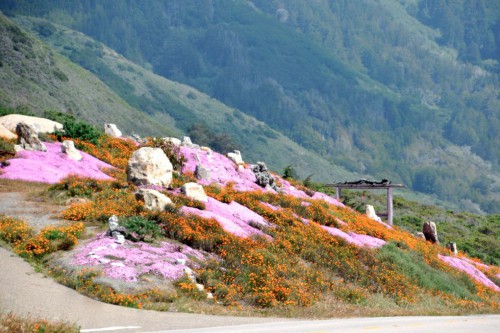 The hills are just as beautiful as the ocean at times and the fog only adds to the scene. We were fortunate that we didn’t run into too much fog. It can be NASTY some days and that would have made for a quite unpleasant trip along the windy roads. 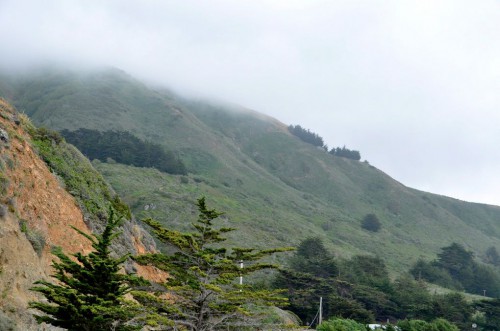 There is a song called Creation Calls with the words “How could I say there is no God when all around creation calls? A singing bird, a mighty tree, The vast expanse of open sea.” So true! 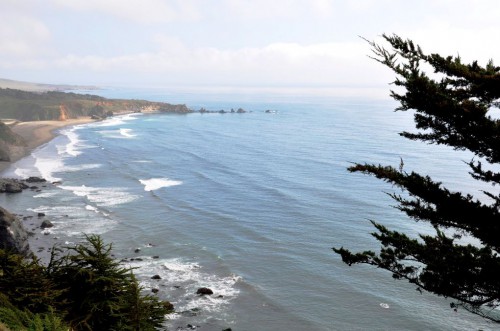 There were even a few spots along the way that I thought looked that they belonged in Ireland. Of course, I’ve never been to Ireland but I did see Leap Year, which was filmed there. 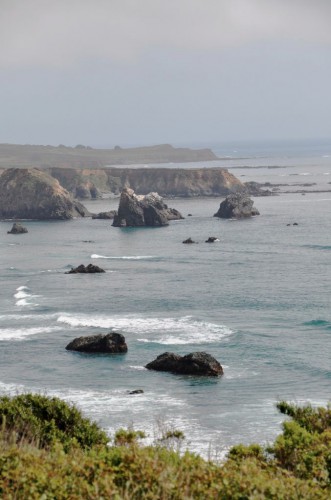 One of the frustrating things about getting good pictures along the coast, or anytime really, is that the best time to take them is before 10:00 AM and after 2:00 or 3:00 PM. Obviously, if you’re going to spend the whole day making this trip (which, by the way, took us 7 hours including lunch and a brief nap break – yes, I said nap – in the car, parked under a tree, overlooking the ocean) you can’t always wait for the correct lighting. You can see in this next picture how the sun is starting to get lower in the sky illuminating the shoreline. 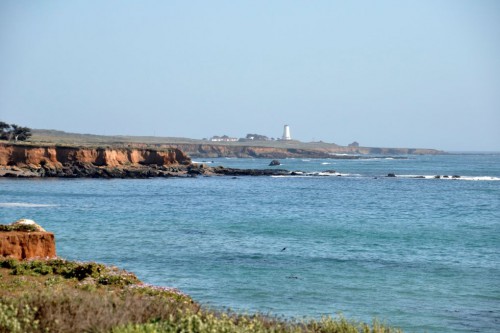 Just before we reached San Simeon there was a sign for an “Elephant Seal” viewing area. When we got out of the car I said, “This could get smelly.” John thought I had a poor attitude about it but let’s just say it wasn’t a chocolate factory. And, it seems it was mating season. 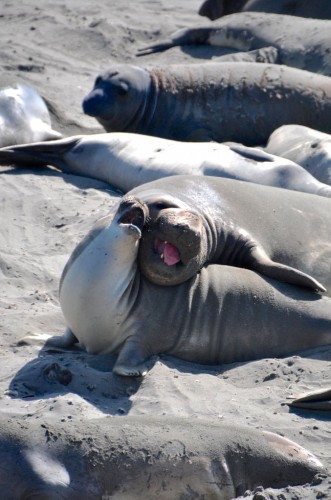 Not to be crude, but if you could have heard the sigh “after the fact” you’d be cracking up right now. Of course, along with mating season there is always the fight for male dominance. The guy on the left won – this time. All the others apparently could have cared less about the fight going on but man they get nasty and it appears that whichever seal gets in the first bite wins. 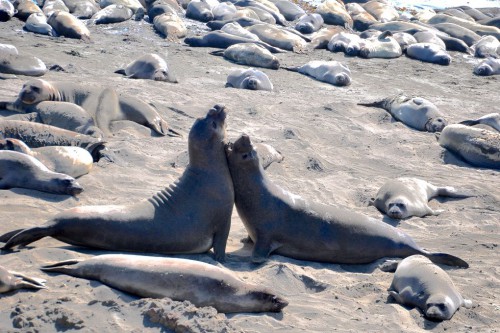 We ended the day at Cambria. It was unseasonably warm and gorgeous. What a fantastic day! 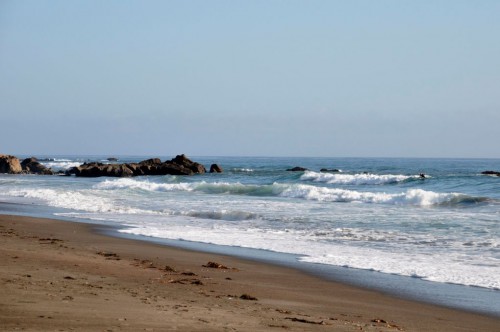 Hope you enjoyed the pictures. And, if you didn’t click on the link for Creation Calls do it now. Talk about some amazing scenes! God’s creation is incredible!