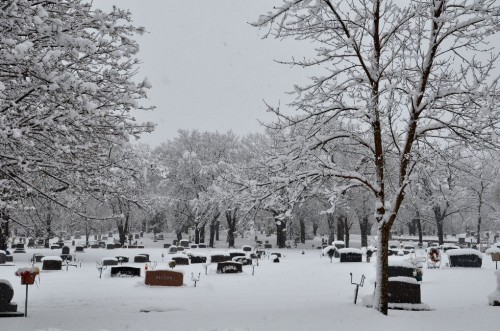 I had a full morning schedule last Thursday, the first Thursday of May. First off, it was National Day of Prayer and our community traditionally has a prayer breakfast. Every year I fight with myself over whether or not to go because, well, it’s at 7:00 AM and it’s no secret that I’m not a morning person. . . . at all. After the prayer breakfast I had an appointment for a much needed pedicure and then another appointment on the books shortly thereafter.

Despite the fact that we’d heard rumors regarding an anticipated snowfall of six to nine inches I will ill-prepared to actually see a winter wonderland when I opened my curtains at 6:00 AM. Let’s not forget it was MAY 2. Schools all over the area were cancelled for the day. I was sure the prayer breakfast would also be cancelled. I mean really, half the community lives on country roads that were surely impassable. Do you know how hard it is to convince yourself to get dressed at 6:00 AM for an event that you’re 99% certain won’t take place, all while your body is screaming at you to lay down and go back to sleep?

Nonetheless, we headed to the prayer breakfast and joined a very slim crowd of people in praying for our country, our state, our community and our children. The speaker was awesome and I only had to leave a couple of minutes before the ending to get to my pedicure appointment on time.

Upon entering the salon I noticed that it was well, rather dark. Not completely dark, but kind of half dark. The owner, Annette, who is also my friend and the person scheduled to do my pedicure, was on the phone to the power company explaining that yes, she had checked her fuse boxes and no, that was not the problem. When she got off the phone she told me that we could still do the pedicure but I might need to hold a flashlight on my toes while she polished them because the lighting was minimal. With a trip to California just three days out my toes were in serious need of an upgrade so I was willing to do whatever it took to make that happen. And, amazingly enough, I was even prepared with the flashlight app on my iPhone. Who knew it would come in so handy?

There is something about getting a pedicure in semi-darkness that is just . . . weird . . . and adventuresome. I’m all about adventures – especially ones that aren’t life-threatening. Just when it came time to put the toenail polish on my toes the lights gave out completely and there we sat in total darkness – except for my phone/flashlight. Annette thought it best that we move out to an area where there were some windows so we searched for the best naturally lit area in the salon which turned out to be the back hallway. Once we were situated she proceeded to put polish on my toes, with my foot on her lap. It’s a good thing we’re friends or that could have been awkward. Fortunately, especially for Annette, the power came back on halfway through the process and we were able to move back to a more comfortable area to complete the job.

Once my toes were done and kind of half-dry, I headed to my next appointment just a couple doors down the street . . . in my flip-flops. Nothing says, “I’m from Minnesota,” like wearing flip-flops on a cold winter/supposed to be spring day. Unfortunately, my next appointment had to be cancelled because the person I was meeting with had a tree in her driveway brought down by the 15 inches of snow that had fallen at her house!

My toes weren’t quite dry enough to wade through the three inches of snow next to my car so I did what any reasonable person would do; I walked to the library still in my flip-flops! I waited there, reading by the fireplace, until my toes were dry, put my boots back on and headed home.

There’s no moral or great spiritual insight to this story. It was all just part of living in the great state of Minnesota where sometimes winter just plain refuses to give up. I guess you could say that, if there is a lesson to be had here it is to be prepared. Because, just three days later, I left town in my sandals on a balmy 62 degree day. . . and my toes were ready.