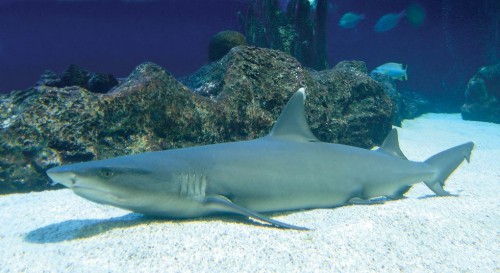 I enjoy trivia, little facts that are basically unimportant in a person’s everyday life. So, when I go to Caribou Coffee (found only in the Midwest) I enjoy their “trivia question of the day.” It’s posted up on a chalkboard and if you know the answer you get 10¢ off your order. And wow, that could save you millions over the next 2000 years. When I happen to know the answer I get pretty excited because, well, I’m easily entertained.

On a recent trip to Caribou however, I was pretty much stumped by the question. Here’s how it read: Alone in New York people are bitten ____ times more each year than worldwide by sharks.

This was a puzzler, but since I didn’t want to waste the cashier’s time while I thought deeply about it, I used my middle school strategy of answering multiple-choice questions that you are clueless about and went with “C.” When I was in middle school I was taught (I thought by a teacher, but in hindsight this information more likely came from another student) that if you don’t know the answer to a multiple-choice question the best guess is always “C.” I employed that method of guessing my way through multiple-choice tests more than once and it actually worked fairly well for me.

I decided that was the plan I was going to employ at Caribou which would have worked perfectly had I taken a little more time to actually determine what answer came after the letter “C.” For some reason, I thought the “C” was next to the “A” instead of below it, so I said “20.” But then I added, “More likely to be bitten by what? Sharks?” as I pondered how many sharks there could possibly be in the waters abutting the state of New York.

As it turned out, the clerk was way more lenient with her rewards than any of my middle school teachers. Because, after hearing my incorrect response and accompanying question, she said, “I don’t know, I’m just going to give it to you because I think it’s a poorly worded question.” So, there’s ten more cents in the Holte retirement account! But I wasn’t satisfied with my 10¢ win, oh no; I was now on a one-woman mission to figure out the true question, “What are you ten times more likely to be bitten by in New York?” Enter Google Search.

It didn’t take long for me to find the Shark Foundation website, which was apparently the source of the Caribou Coffee Trivia question. And quite frankly, the true answer is a little frightening. This is what I read, “Alone in New York people are bitten 10 times more each year by other people than worldwide by sharks.” BY OTHER PEOPLE? Does the state of New York have a biting problem? I heard there was a bed bug problem, but never once did I consider the fact that another person might bite me when I visited New York City a few years ago. I can hear the police call now, “Car 56, please respond to a biting incident on the corner of 55th and Broadway.”

The Shark Foundation, it seems, is intent on making sure you know that shark bites are very rare. Besides the information about the biting New Yorkers there are some other fascinating facts on their website. For instance, in the USA and Canada alone approximately 40 people are killed each year by pigs – six times more than by sharks worldwide. PIGS! Note to self; don’t take up pig farming.

And, if you’re thinking about a winter trip to a tropical island you might want to reconsider. It seems that around the world, considerably more people are killed by falling coconuts than are bitten by sharks.

Who knew that a stop at Caribou for some Mango Iced-Tea would be so valuable? Not only am I 10¢ richer, I’m a fount of shark attack information. My parents will be so proud, as will my middle school teachers, I’m sure.