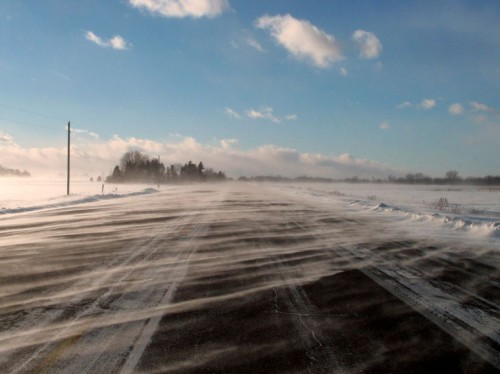 You see that picture? Yesterday I drove in that. Technically I believe it’s called a ground blizzard because, as you can see from the blue skies, there was no snow falling. I’m not going to lie; it wasn’t a fun drive. I do want to clarify that I stopped the car to take the picture. But, this picture doesn’t depict the worst of it.  There were times when I could barely see the car fifty yards in front of me. And then there were times when I could see just fine; depending on whether I was next to an open field or a more protected area.

It was during one of the not-so-bad spots when I got the giggles as I thought back to my first winter in Minnesota. You see, I grew up in southern California and though I had learned how to handle massive amounts of traffic pretty well, I didn’t walk away with the skill set for traversing snowy roads. We weren’t far into the month of December during my inaugural year as a Minnesotan when I had the chance to experience my first snowfall. (I’d already been wearing my down jacket for at least a month at this point.) We didn’t get a lot of snow on that December day, maybe just an inch or two. And I determined then and there that I was NOT going to allow a little bit of snow to stop me. If I was going to live in Minnesota, by golly, I was not going to cower to the elements.

So, I set out that morning to join other women from our church for a Bible study at a home just outside the city limits. Translation – on a country road. I hadn’t gone far down said road before my car, with a mind of it’s own, started to veer off towards the ditch on the left and of course my first instinct was to slam on the brakes to make it stop. But it didn’t stop. This was in the days before anti-lock brakes and before cell phones. Yes, I am that old.

You see, no one had ever taught me that you don’t want to lock your brakes up when you are trying to stop on a slippery road. If they had, the lesson certainly wasn’t at the forefront of my mind as I careened off the road. Yep, just landed, right there in the ditch, barely clearing the electrical pole. No phone, no clue what to do. I can pretty much guarantee there were tears. But that’s the day I learned about Minnesota nice. Across the road from my car’s “resting point” lived a farmer who, it seems, had been watching my failed attempt at keeping the car on the road. He had pity on me and in what seemed like five minutes had hooked up my car to his tractor and pulled me out.

I was young, and dumb. I didn’t even know the right thing to do when offered such kindness. Should I pay him? Thank him a bazillion times? Send a card? What? I’m sure I handled it wrong. Hopefully, he’s received his reward for the benevolence he offered a fledgling California-turned-Minnesota girl. It was humbling, to be sure, but I could not and would not allow this to stop me from learning to handle my car in the snow.

Of course, there’s one thing you can count on during a Minnesota winter: another chance for testing your ability to handle your car in the snow is just around the corner. So, two days later when it snowed again I left home confident that this time I would know what to do should my car start sliding. I was less than two blocks from home when my brakes locked up again as I headed down a slight hill towards a somewhat busy (by small town Minnesota standards) highway. I was panicked! I had visions of my car sliding onto the highway at the exact moment a semi was passing through. Somehow, with mere inches to spare I managed to stop the car.

Later that night I remember burying my head in John’s shoulder as I sobbed hysterically saying, “I hate it, I hate it, I hate it! My car just wouldn’t stop! Why do we have to live here?” I’m sure I ranted for a good twenty minutes. This, by the way, is the part of the story that had me in giggles yesterday. I thought to myself, “I would never in a million years have thought 36 years ago that I’d be driving in this craziness today.”

So, last night when I got home and John said, “How were the roads?” I replied, “Oh, a little slippery in spots. Not too bad.” I guess that means I’m now a full-fledged Minnesota girl. Or just stupid.

And were I superstitious I probably wouldn’t mention this, but I’ve been “ditch free” for 35 years. Sure, there was that one little accident, but that’s a story for another day.