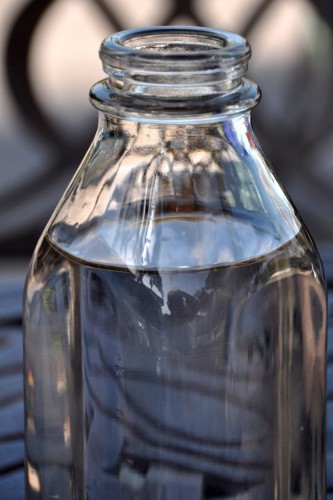 It’s amazing how seeing something as simple as a bottle filled with water can bring back a flood of memories. Last week John and I were in San Diego, California for a little reprieve from the snow and ice here in Minnesota. Unfortunately, we came home too soon, but that’s another story. This is a story about the water bottle and the memories it evoked.

Our first night in San Diego we decided just to eat at the hotel where we were staying. It was nearly dinnertime when we arrived and we didn’t want to spend a lot of time looking around for restaurants in a city we’d not been in for over 25 years. And, we had a coupon that the hotel had given us for $10 off – bonus! We are water drinkers primarily so the waitress brought a bottle of water to leave on the table allowing us to refill whenever we wanted. I love that. But this particular water bottle (shown in the picture above) reminded me of the milk bottles we had delivered to our house when we were kids.

Gone are the days of having a milkman deliver milk to your door but it seemed like a good idea at the time. When my mom was having milk delivered, of course, it came in glass jars and they were heavy once filled with milk. By the time I had a house of my own and had milk delivered it came in plastic bottles. Looking back on it now I wonder why I thought this was a necessity. As if bringing a gallon of milk home is so much work. Then again, I had small children and I suppose the extra strain of carrying a child AND a milk jug just seemed like too much stress on my body or something. Ha! At least it gave the milkman a job and I’m all about encouraging small businesses.

Anyway, back to San Diego for the rest of the story. On our second night in San Diego my brother, sister-in-law, and nephew arrived to spend about 24 hours with us. We chose the same restaurant for pretty much the same reason. It was handy and their plane had arrived late, plus they now had a coupon, too. So, when the water bottle arrived I asked my brother if it reminded him of anything and he immediately said, “Yes, the milk we had delivered when we were kids.” And that got us to talking about the “neighborhood trucks of the 60’s and 70’s.”

For instance, not only did we have a milkman but we also had what I consider to be the best thing ever for a kid, a bakery truck, Helm’s bakery to be exact. Seriously, go look at these pictures and I know you’ll understand why this was so cool. I’m sure my mother bought bread and the like from the Helm’s truck, but it was a special day when we could get a glazed doughnut straight from the “doughnut man.” I can’t remember how often he came, or how many times I was allowed to get doughnuts, but I can tell you exactly where that truck parked when it hit Strub Avenue in Whittier, California – directly across the street from the end of our driveway. Ahhh . . .

Of course, as it was in many towns we also had the ice cream truck come by every summer. I still get a little excited when I hear the music of an ice-cream truck in the summertime. It reminds me of my childhood. We’d save up our money for special treats and eat them out in the hot sun. Of course all of this was before the big Tylenol scare of 1982 which in my mind, marked the beginning of the end of trust in America. Nowadays I hear moms complain about the ice cream truck coming through their neighborhoods concerned that their child might be the victim of some sort of poisoning or perverted truck driver. It’s sad, but in reality, I’d be equally concerned.

There was ONE more truck that visited our neighborhood though I never truly appreciated it as a kid – the fish truck. I wasn’t a huge fan of fish when I was a little but I have to admit, “Nick the fish man” made the fish truck arrival an adventure. He would pick the fish up at the docks in the morning and make his way to our neighborhood by afternoon so when we had fish for dinner it was straight-from-the-sea fresh. Nick would take my mother’s order and then cut the fish up right there in front of us. I must have liked him because I always went out with my mom to get the fish. It’s not like she needed me nor were there any doughnuts or cupcakes involved as far as I can remember. But Nick, he was a colorful soul and fun to be around.

So when I was at the restaurant last week and saw the water bottles, it was an obvious jump (at least in my mind) to order the sea bass. It was delicious.