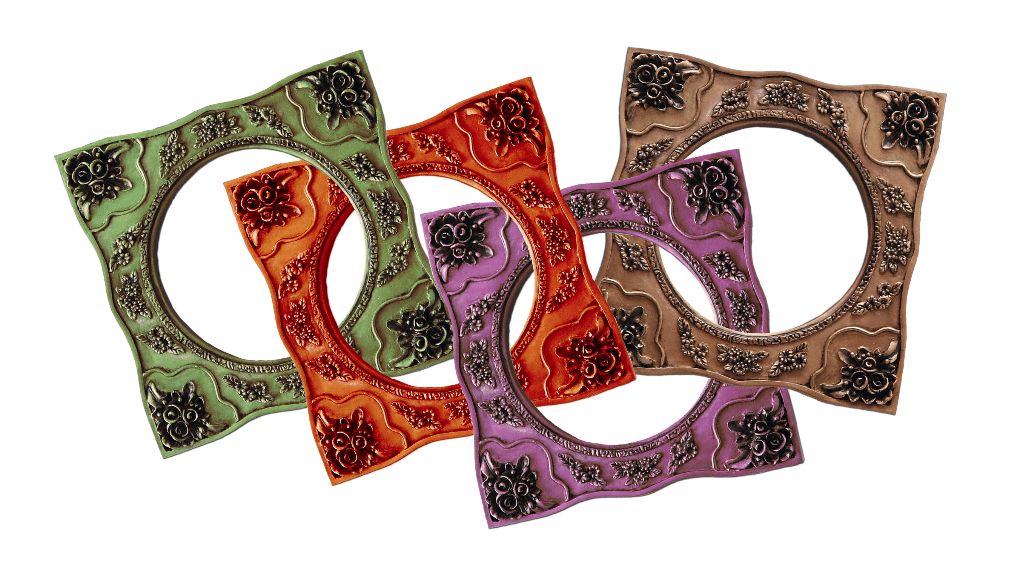 As has been mentioned on this blog before, my husband recently went through a stem-cell transplant to treat Multiple Myeloma. As part of the transplant process he received two doses of heavy chemotherapy. We were told this chemo would make his hair fall out – no ifs, ands, or buts about it. I tried to have a good attitude about it knowing that it is, after all, just hair and it’ll grow back.

We prepared for what I referred to as “The Great Hair Loss Day” by cutting most of his hair off a few days before the chemo even started. The thought behind this was that it would be less of a mess to deal with if there wasn’t much there to start with. Being as this was my idea it took some convincing to get John onboard but, knowing that I would be the one to deal with the mess, I persisted and eventually John acquiesced. Personally, I thought I did a pretty good job on the haircut. 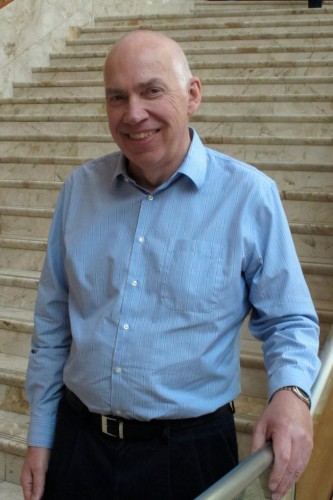 That was a Thursday. John had his chemo on the following Saturday and Sunday. We knew his hair wouldn’t fall out right away, we just didn’t know how long it would take before the shedding would start. As it turns out, it was a full three weeks later before there was any significant hair loss. By that time John was positive he wasn’t going to lose it and was somewhat annoyed that I’d convinced him to cut it off.

At this point John was in the hospital and when I walked into his room that morning I noticed that his dark blue pajama top looked like it had seen some significant snowfall the night before. Maybe it would have helped John if he’d seen longer strands of hair on his shirt to realize that it was actually going to fall out completely. But, once again, being the “ever-practical-let’s-avoid-a-mess” kind of girl that I am, I suggested that we do a final “closer to the skin” cut before leaving the hospital. The doctor had told us he’d be released from the hospital the next day and at that point in the journey we were staying at a hotel. Cutting John’s hair at the hotel didn’t seem like a good idea at all. Additionally, one of the nurses volunteered to do the final cut for us. He, we were told, was a pro. So, on John’s final night in the hospital he somewhat reluctantly allowed nurse/barber Jon to shave off what was left of his hair. 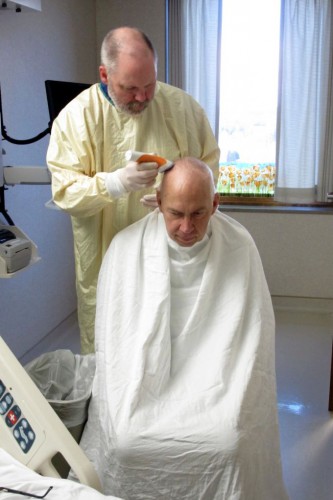 I (obviously) took a picture of the big event, posted it on Facebook announcing that “The Great Hair Loss Day” had indeed arrived – like it was a good thing. Many of my friends commented on what a great look it was on John; how it was just like their hair, or their husband’s hair, or how trendy this style is. One friend even said she called it “the hero haircut.” I appreciated all the love and support and said nothing negative to John whatsoever but inside I was a crying mess. I hate it. HATED. IT.

It wasn’t the hairstyle per se that I hated; it’s what it represented to me. Cancer. I hate cancer! And a bald head just screams cancer to me. Never mind that it’s trendy. I don’t care. To me it said, “I have a horrible disease and this is just one of the annoying things that I have to put up with to save my life.”

But, the other night I had a bit of an epiphany about “The Great Hair Loss.” Instead of thinking about it as the result of sickness, why not re-frame it and think about it as the beginning of healing? After all, the job of the chemo is to kill off the cancer cells and thus begin the healing process, right? So, that’s what I’ve decided to think about when I look at my bald husband – healing.

Re-framing a situation isn’t a new idea. I’ve heard about it for years. But like lots of things, we fail to remember them when we’re in the midst of a trial. Sometimes we’re so busy wallowing in our own pit of despair that we forget to look up for help.

What’s going on in your life that needs to be re-framed today? Ask God to show you how. His love for you is great; there’s no need to wallow in the pit any longer.

“What is the price of five sparrows—two copper coins? Yet God does not forget a single one of them. And the very hairs on your head are all numbered. So don’t be afraid; you are more valuable to God than a whole flock of sparrows.” Luke 12:6-7