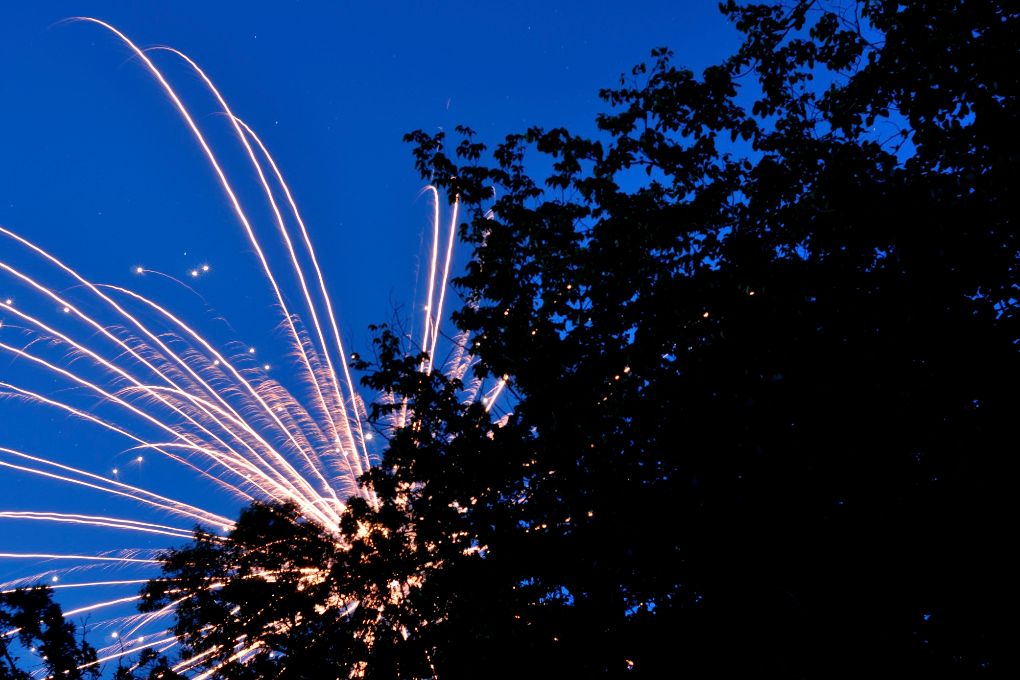 Every family seems to have their own 4th of July traditions. I remember when I was a kid there was lots of excitement present in our household. A day or two before the holiday, my dad, accompanied by whoever wanted to go, would drive to a city abutting ours in southern California to buy a box of fireworks. (This is important information for later in the story.)

To be honest, I only remember two actual events from our annual July 4th celebration: putting the American flag out in the morning and the “Fireworks Party” with the Castle family in the evening. The Castles would come up for a barbecue dinner on the patio and then the kids would ever-so-impatiently wait until it was dark for the fireworks box to appear.

There was a method to our fireworks show. It was always in the backyard, the kids and moms sat on the patio and the dads lit the goods. BUT FIRST, there were the sparklers. Well, actually, first there were the “snakes”; those somewhat cool but kind of boring black things that you lit and watched as they just sort of unfurled and looked like a snake slithering along the sidewalk. That’s what we played with while we waited for it to get dark. Once the dark came, though, it always started with the sparklers. I LOVED the sparklers and I remember how each kid (there were five of us altogether) would get our lit sparkler and run aimlessly around the backyard. I was the only girl so I really didn’t pay attention to what the boys were doing but I would take my sparkler and write words in the sky as I danced around the yard. Ah, the memories of those carefree moments.

One year, however, the sparkler joy turned into a nightmare (for me, at least) when one of the boys, with his sparkler held far out to his side, ran right past the box of fireworks waiting to be set off. You remember that old song, “It only takes a spark, to get a fire going?” Well, it’s true. One tiny little spark made its way to the fireworks box, and before we knew what had happened, the entire box started going off. What I specifically remember is the huge fire that ensued but my dad recalls the twirlers going one way and the fountains spraying another. I probably don’t recall where the fireworks were shooting because by then I was in the house crying hysterically and yelling, “We need to call the fire department!”

My dad got the hose out, turned it on and had it ready to spray at a moment’s notice. For some reason I’m still at a loss to understand, he wanted to wait until the fireworks were done exploding before putting the fire out. Maybe he was thinking that we didn’t want to miss the “show” that his hard-earned money had purchased, I don’t know. And really, I’m sure the fire itself was relatively small but I’d been trained that if you see a fire, you call the fire department. I just couldn’t figure out why no one was rushing to the phone. In fact, I believe my mom even stopped me from making the call. Remember at the beginning of this story when I mentioned that we drove to the neighboring city to buy our fireworks? Here’s why: They weren’t legal in our city. (Hey, don’t judge me, I was just a kid, remember?) So, you see, alerting the authorities that there was a fire would probably not have gone well for my parents.

Soon enough the explosions stopped and my dad put out the remaining fire with the hose. My crying turned to gentle recovery sobs and we put a tie on the very eventful 4th of July – one we’ll never forget.

Within a year or two, fireworks were legalized in our city so we moved our show to the front yard and the other neighbors joined us. But you know what? The 4th of July was never the same after we moved it out front. It wasn’t the fire that diminished my joy, it was the lack of coziness with just my family and close friends that I missed. Or maybe I just had to share the sparklers with more people. I did love those sparklers.