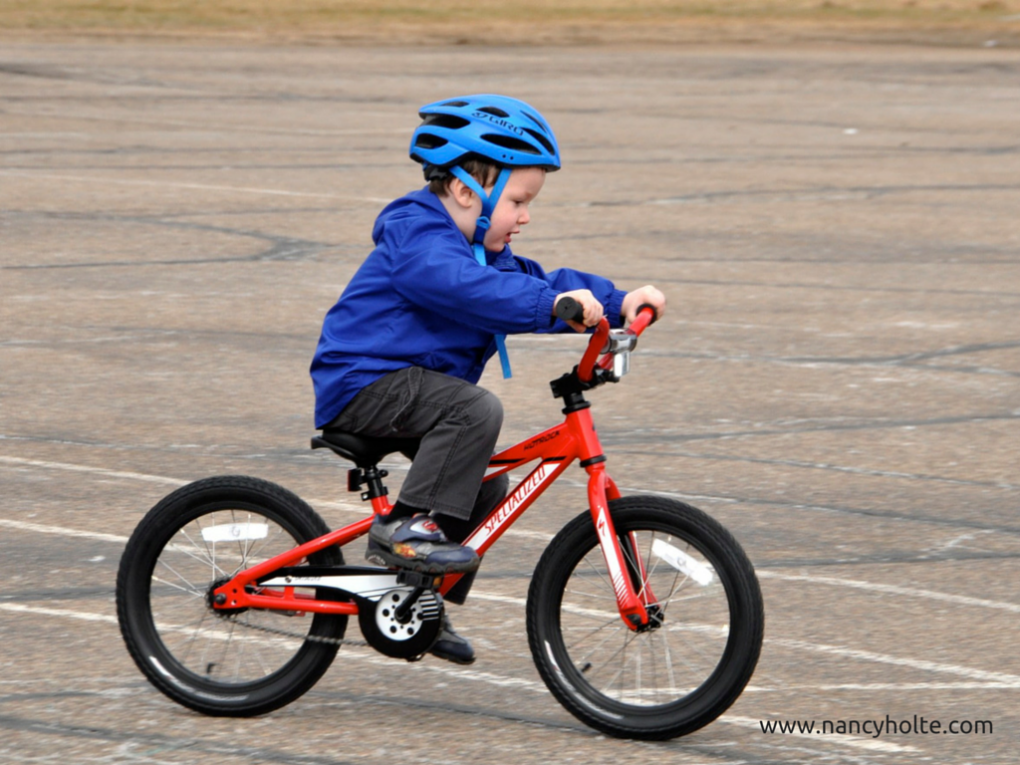 Our oldest grandson, Charlie, will be four-years-old this week. For his birthday gift we combined efforts with his parents and got him a two-wheel bicycle. Last year we gave him one of those newfangled balance bikes that sit low to the ground and don’t have any pedals. He mastered it in about a week and kept asking all summer when he’d be “good enough” to ride a real bicycle with pedals. I wanted to tell him his dad rode a tricycle until he was nearly six but then I would have had to answer an endless list of “why questions.” He was three, after all.

Because we were visiting with Charlie and his family a couple of weeks ago we decided it would be more fun to let him have his birthday present early so we could be in on the excitement. And excited he was! He couldn’t wait to try it. Charlie’s first attempts on his new bike were in the driveway at his house, which was hindered by two vans and an SUV crowding the driveway. As all parents do when their child is learning to ride a bike our son Adam was there to hold the bike upright as Charlie made his first cautious try at this two-wheeled wonder. 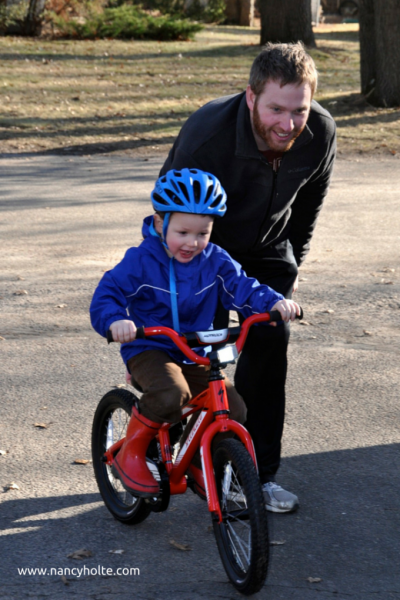 Realizing that a bit more space would be beneficial we decided to take a dinner break and then head to the nearby school playground. There we found oodles of wide-open space for Charlie to master his new two-wheeler. As you might expect, there was lots of wobbling, stopping, and frustration in Charlie’s pursuit of bicycle independence. It was his mom, Heidi, who figured out how to solve the wobbly wheel issue. You see, Charlie had his focus on the pedals, his feet, the ground, and his dad who he was sure was going to let go just to watch him crash. Heidi encouraged Charlie to look straight ahead.

I happened to be taking pictures at that moment and I was at the “straight ahead” point of vision for Charlie so we encouraged him to ride towards me. (Please be impressed by my ability to run backwards AND take pictures all at the same time!) It probably won’t surprise you to learn once Charlie started looking straight ahead to where he wanted to go and took his eyes off the “obstacles” the wobbling stopped. In a matter of about 30 minutes he was riding like he’d been doing it all his life. When Charlie got off his bike that night and headed for the playground equipment, he did a quiet little victory jump, pumped his hands up in the air and said, “Yes!” It was such a fun moment.

As I reflected back on Charlie’s victory I thought of what an amazing analogy this is to our walk with Christ. I don’t know about you but sometimes my focus can get fixated on the difficulties, hurdles and stumbling blocks in my way and I wobble a bit. Sometimes I wobble a lot. Will I be able to meet my deadlines? Can we really afford to do that remodeling project? Will I mess up when I’m teaching that class? Sometimes relatively insignificant things threaten to throw a girl off-balance! But when I take my focus and put it square on Christ, the wobbling stops and I remember, once again, His promises are true.

How about you? Where is your focus today? Are you wobbling around fixated on your problems or do you have your eyes on Christ? Look up, friend. He’s right in front of you calling out, “Come on, you can do it, keep looking at me!” If you keep your focus on Him you’ll soon be pumping your arms in the air shouting, “Yes! Thank you, Jesus.” I hope you do a little victory jump at the same time.

“We do this by keeping our eyes on Jesus, the champion who initiates and perfects our faith.” Hebrews 12:2a