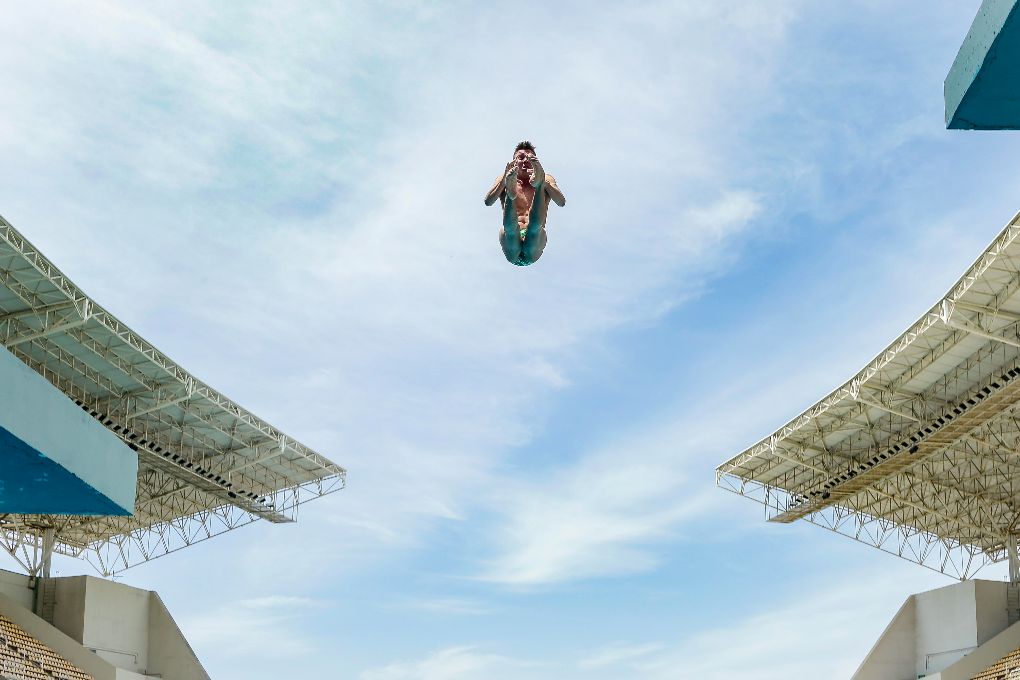 The Olympics have started and I think it’s time I tell you something. I was almost an Olympic diver. And by almost, I mean, I once tried diving. And by tried, I mean I got on the board with the intention of making a dive.

Here’s how it all went down: I was on the swim team in high school. Junior Varsity, which translates to, “I could swim, but I was far from the best girl on the team.” But one day I decided I wanted to be a diver. That looked like fun. I went to our coach and said, “Mrs. Warren, I think I’d like to dive.”

“That’s awesome, Nancy! I think you’ll be an amazing diver. Let’s go try it out.” Okay, it was 45 years ago. I have no idea what she said. But, it’s my story so I can make up any response I want, right?

Anyway, after our regular swim practice the next afternoon, Coach Warren stayed late and had me get on the diving board – the short one (1-meter). . . because I was new to this whole diving thing. I walked out to the end of the board full of confidence. How hard could it be to dive?

At this point, Mrs. Warren said, “Okay, Nancy, what I want you to do is turn around, back up until only the balls of your feet are on the board, then jump back and dive forward into the water.” (This part I’m not making up. Those were her exact directions.)

After what seemed like ten minutes, I turned my head, looked at Mrs. Warren, and said, “So, let me get this straight. You want me to jump backwards and then dive head first TOWARDS THE BOARD? Um, what if I should, say, hit the board and crack my head open?” What I lacked in bravery I made up for in smarts.

I don’t recall much of what was said from that point forward. I do remember I never did that dive. Since I was already facing the ladder, I just walked to the end of the board and climbed down. “I don’t think I really want to dive after all,” I told my coach.

Poor Mrs. Warren, she probably still has a scar on her tongue from biting it so hard that day to keep herself from laughing. When I say I was almost an Olympic diver, I should really be saying I was almost a professional Olympic diver watcher. That’s what I like to do. WATCH.

And trust me, I won’t ever forget when Olympic diver, Greg Louganis, one of the best divers of all time, cracked his head open diving from the 3-meter springboard during the 1988 Olympics. (If you’d like to watch the terror click here.) This was at least 16 years after my walk away from the edge of the board. You see, I knew it could happen! Never mind he was doing a reverse somersault dive. It happened. That’s my point . . . diving is dangerous!

Despite the danger, I’ll keep watching. After all, it’s not my head in jeopardy. When I’m safely tucked away on my couch, diving is a great sport! Actually, I love most all of the Olympics, and, not to brag, but I make a great professional Olympic games watcher!

I’m rooting for you, Team U.S.A.! Watch your heads!