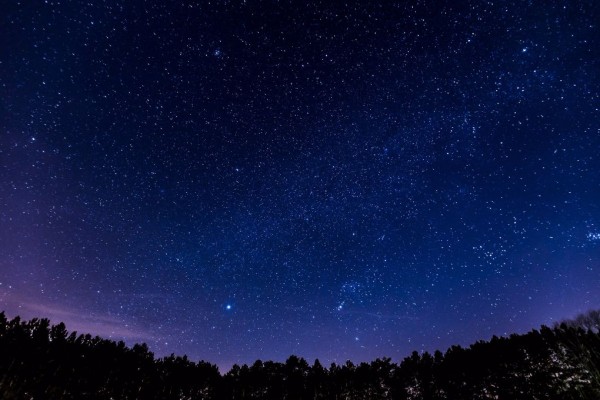 John and I spent Labor Day weekend “up north” at a friend’s cabin. It sits on one of Minnesota’s beautiful lakes and is out in the middle of nowhere. While I wouldn’t really enjoy living in such an isolated area, the relaxation I feel in the middle of such beauty is hard to beat.

One of the great bonuses of getting away from city lights is the increased visibility of the stars. I love watching the stars. It’s easy to forget how vast they are when your normal view is limited.

On the Thursday night before our trip I was driving home and noticed a little bit of Northern Lights activity scattered across the sky. It was short-lived, and not particularly colorful but watching the clouds dance around in the sky is mesmerizing. Often, when the Northern Lights (also known as the Aurora Borealis) are visible, they’ll show up two or three nights in a row so I figured there’d be a good chance of seeing them again on Friday night being as we were nearly 200 miles further north.

As we were sitting around the fire pit, having finished our s’mores, I commented on the possibility of there being a Northern Lights display. My friend, Lynn, suggested we could check the weather reports but I had another idea. I asked Siri – my little iPhone servant. She sent me to a website where I read there’d be some “storm activity” in 44 minutes. This was going to be awesome! In my mind, it was going to be a magnificent display of multiple colors swirling around the sky. I’d be able to check “See a cool Northern Lights display” off my bucket list and eliminate my plans to go to Iceland in the middle of winter. Lynn suggested that it would be even more fun to take the pontoon out to the middle of the lake to watch “the storm.”

It was kind of a chilly night so we bundled up as best we could (I had significantly under packed) and boarded the pontoon for our adventure. Within seconds of pulling away from shore the stars, it seemed, got even brighter. Right away we knew that even if we didn’t see the Northern Lights, we were still witnessing a grand display of God’s creation; thousands of stars, the Milky Way, and even a few meteoroids took our breath away!

We waited and watched for the Northern Lights, but they seemed to be hiding. So, I checked my phone again and this time read, the “storm activity” would be high in 42 minutes. Ten minutes later, it said the “storm activity” would be high in 49 minutes. I don’t know who runs this website but their ability to forecast Northern Lights is pathetic. Every single time I checked the site it was going to be another forty-some minutes before the “storm” went into full affect. It got to be comical as even during the daylight hours on Saturday, it said the same thing. Empty promises!

The truth is though, had we never seen that forecast we probably wouldn’t have ventured out in the pontoon just to watch the stars but I’m so glad we did. If it’s even possible, they appeared so much brighter as we slowly puttered our way across the lake. The larger stars looked as if they were portals to heaven – straight to the One who hung them in the sky.

As we soaked it all in, it just seemed right to open my iTunes and play Carrie Underwood’s version of How Great Thou Art. “I see the stars, I hear the rolling thunder, Thy power throughout the universe displayed.” No doubt the goose bumps I experienced were no longer from the cold. The presence of God was palpable in that pontoon. It is not a moment I will soon forget, a simple moment of awe and thanksgiving. 44 minutes of amazing!