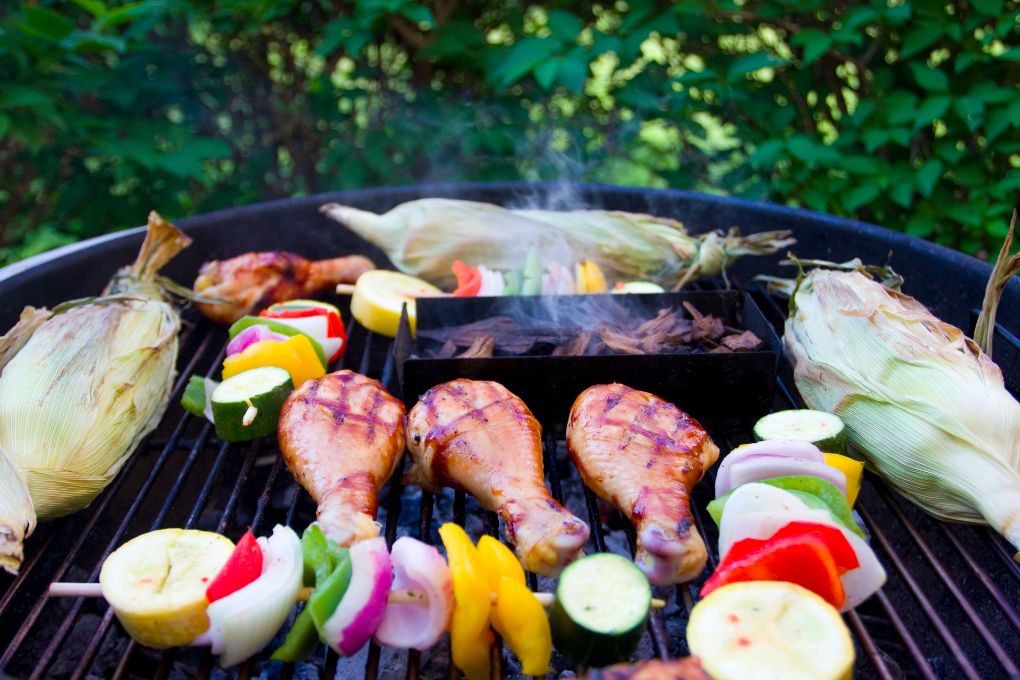 Summertime is grillin’ time, right? Actually we love to grill all year long though my husband does protest a bit when the temperature gets below 0°. He’s also not fond of dirty grill grates. He’s sure they’re going to give him cancer. And I guess since he’s already had cancer he has a right to be a little phobic about getting it again.

I’d heard that if you take your oven shelves and put them in a big plastic garbage bag with some ammonia overnight you can simply rinse them off in the morning and they’ll be all clean. I figured why not try it on the grill grates? So, I found a big heavy duty plastic bag, carefully slid the grill grates, set the bag on the side of the house, poured in some ammonia, and quickly walked away. Note: if you decide to do this DON’T INHALE the ammonia. That stuff is potent!

After a couple of days I remembered the soaking grill grates and dragged them out of the bag to the kitchen sink. Amazingly enough a LOT of gunk came off. But, I was still a long way from having clean, non-carcinogenic grill grates so I stuck them back in the bag and added a little more ammonia before I had to leave home for a meeting. And, since I once again forgot about them a couple more days passed before I worked on them. As it had before some of the gunk rinsed off but they were still far from clean.

As I scrubbed with steel wool and rinsed I thought, “if only I could get more pressure out of my faucet. That would knock some of this stuff off.” I looked up and noticed the pressure washer my husband had been using was sitting in the front yard. “That’s genius!” I decided as I carried the grill grates out to the street. (Trust me, you don’t want to do this on your yard or driveway because the black stain might not ever come off.) I may or may not have looked like a crazy woman at this point but that grill gunk was simply not going to win this war although it did put up a pretty good fight. While the power washer was impressively helpful it still wasn’t perfect. At this point in the battle I was still hoping for shiny like new. Ha!

Now it was time for a new battle plan. I had noticed when I dragged the grates out of the heavy-duty plastic bag that much of the ammonia had leaked out so I found an old plastic container with a lid that was just the right size for holding dirty grill grates. I put them in, poured an entire bottle of ammonia in forgetting the DO NOT INHALE warning, and quick put the lid on before doing further damage to my lungs.

Once again, a day or two passed before I gathered the desire to attack the problem again. I pulled them out, and back to the kitchen sink. By now, I’d realized that rubber gloves would save my hands from looking like they belonged to a car mechanic. You might want to take note of that.

After some serious scrubbing for a third time, now with an SOS pad, I declared the grates “good enough.” They aren’t shiny like new but I realized that’s probably not possible unless I actually buy new grill grates which, I realized after the fact is indeed an option. But, there’s a feeling of accomplishment when you do it my way. And now, in an effort to keep them clean, I try to scrub them rather regularly so I don’t have to go through this again.

If you have dirty grill grates here’s my advice to you:
1. Skip the first two rounds in the plastic bag and go straight to the plastic container.
2. Wear a mask or hold your breath when you pour in the ammonia. Don’t do this in the house!
3. If you have a power washer, don’t be afraid to use it.
4. Wear rubber gloves
5. Protect your sink from scratches if you can. AN old towel will suffice but don’t plan to ever use it again. A rubber sink pad will work, too.
6. Once you rinse the ammonia off the grates, SOS pads work fairly well.
7. If you’re not up for the challenge and you can afford it, just buy some new ones.