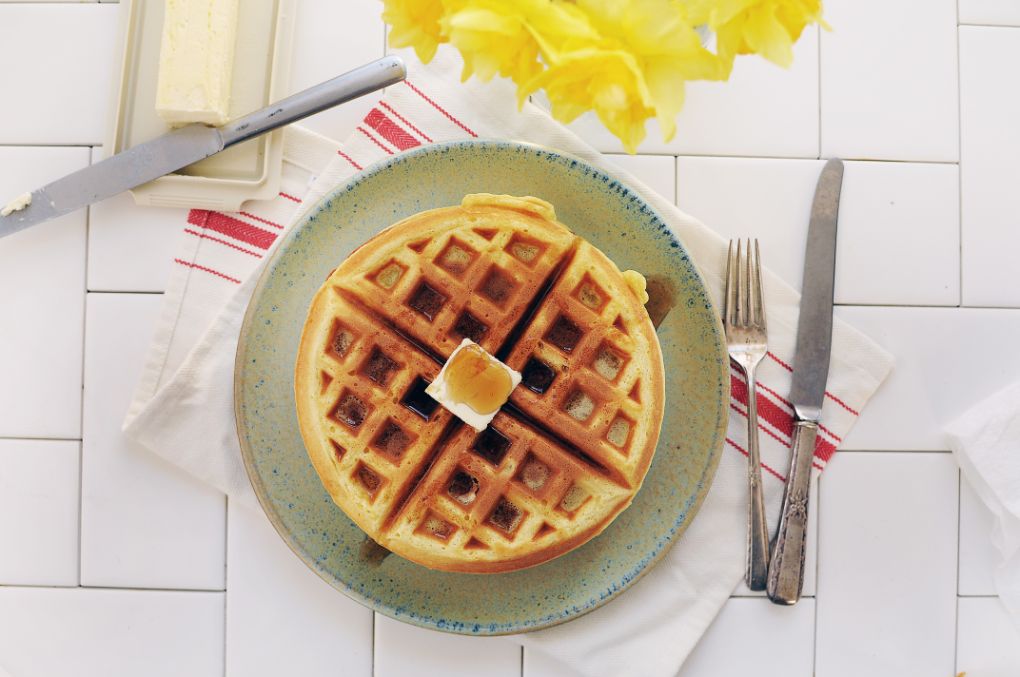 During quarantine actor John Krasinski did a weekly show on Facebook that he called Some Good News. If you didn’t see them, and you need a laugh, you can find them on Facebook, or on You Tube. In one of the episodes John asked people to share their favorite family recipe.  When I heard him ask the audience to send in their recipes I thought, “I wonder what our favorite family recipe is? I couldn’t think of a thing that we all anticipate having for special family occasions. I couldn’t even think of a family favorite from my youth.

I would say that if my brothers and I were to come up with a family favorite meal it would probably be waffles. For many years that was a Sunday night dinner tradition. While other families were having pot roast and potatoes, we were having waffles. We felt like the lucky ones. I don’t know that my mom had an official recipe she used, but I’m going to guess that Bisquick was involved—so clearly not a recipe I need send to John Krasinski.

My favorite “food memory” from my youth was cinnamon toast. My mom made THE BEST cinnamon toast I’ve ever had. She’d make a big pan of it in the oven under the broiler. She’d toast/broil one side of the bread, flip it over, lightly butter the other side and sprinkle it with cinnamon sugar before putting it back under the broiler. I think there are two reasons her cinnamon toast was particularly good; she used white bread and a high sugar to cinnamon ratio. When Mom broiled the cinnamon sugar side of the bread it would get an awesome, crystallized sugar crunch on it. I try to recreate it sometimes and never seem to quite make it taste the same as my mom did. Maybe because I’m using wheat bread.

All this thinking about my favorite family recipes got me thinking that it would be fun to see if there was a particular meal my kids remembered as special. So, I sent them a text asking them what their favorite meal was that I made when they were kids. My oldest son took about five seconds and replied with “popcorn.” I don’t actually ever remember serving popcorn for dinner but then again, it’s not out of the realm of possibility. Hey, it’s got to at least be equal to waffles in nutrition, right?

My youngest son’s reply was lasagna. I should have guessed that. He would always ask for it on his birthday. Poor guy, now that he’s an adult his birthday celebration usually coincides with our Thanksgiving celebration, so his birthday meal is turkey and we throw a candle into the pumpkin pie.

Our middle son couldn’t really think of a family favorite. He’s a better cook than I am so I’m sure he’s got a few favorites of his own, but he said that as far as my meals went his favorite was either lasagna or hamburger pie. Two votes for lasagna! We may have a winner! I’ve gotta say though, even though the hamburger pie isn’t what we’d now call super healthy, I still think it’s super delicious.

I’ve attached both of the recipes for you in case you’d like to try them. Both came from friends many years ago. You’re on your own for the cinnamon toast, popcorn and waffles.

What are some of your family’s favorite recipes? I’d love to know.