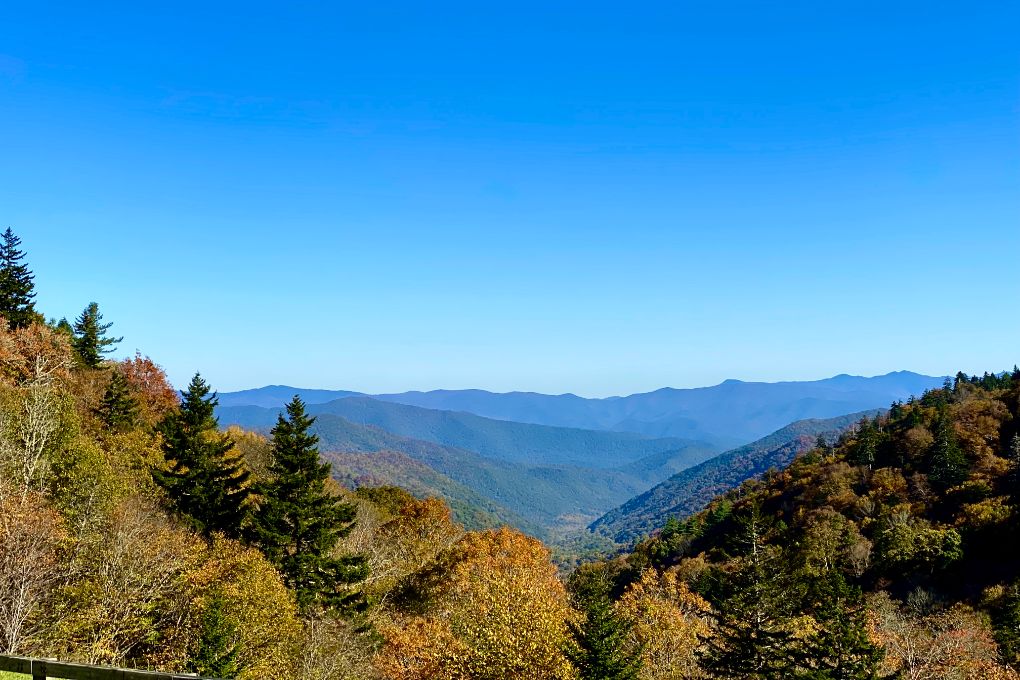 In mid-October John and I went to the Great Smoky Mountain National Park in Tennessee. My brother and his wife were there a year before us and gave us some tips about what we should see. One of the spots my brother thought I should visit was Clingmans Dome. It is the highest point in the park and the views are spectacular, he told me. He mentioned that it was quite a hike up to the dome, but the views were also good from the parking lot. Mind you, it was just a casual comment on his part, but I took it as a challenge. “I don’t want to see no stinkin’ parking lot view!” I thought. “I want the total experience. I am going to climb up that mountain if it kills me!”

Armed with a walking stick and my phone we left the parking lot and headed up the walkway with the intent of going up to the top. Well, that was my intent, I’m not sure John was actually on board with this idea. Once we got to the visitor center, maybe 500 yards up the path, John decided he wanted to go inside to find a snack. There was a rather long line to get in, so I thought to myself, “I’ll just go up the mountain real quick while he waits in line and then meet him back down here when I get done.” (OK, you can stop laughing now.)

There was a sign that stated it was only a half-mile to the top, so really, how long could that take? It didn’t even look very steep. But off I went on this short little hike and that’s when I found out looks can be deceiving. Very deceiving. The path was much steeper than it looked, and let’s just say, it wasn’t a quick little hike. Nonetheless, I loved it. I didn’t love it so much for its difficulty. I loved it for the people I met along the way.

There were many of us on this trek, who really were not in the shape a person should be in to set out on such an adventure (including me). In fact, I would say that at least 50% of us fit into that category. I doubt they all had brothers who had practically dared them to go to the top, but for whatever reason, they all seemed determined to get there. We all would walk a few yards, and then stop to rest, eventually convincing ourselves to continue.

After a while, we all began encouraging and cheering on the other hikers. While stopped at a bench, or a rock, a hiker would walk by, and I’d hear someone say, “Keep going, you can do it.” What I realized later is that we all had a common goal and we wanted to see each other succeed. Nobody asked which political party I belonged to, or whether I was pro-vax, or anti-vax, they just encouraged. We took pictures of each other along the way, and though we didn’t exchange phone numbers and email addresses, we saw humanity at its best. At one point, when I was just 100 or so yards from the top, I met a woman who found out I was by myself. She said, “My husband is up there – you can see him in the blue jacket”  (I’d already met him) “Let him know you’re by yourself and that I told you to tell him to walk back down with you, so you aren’t alone.” I wasn’t really worried about getting back down by myself, but I WAS still wondering if I’d make it to the top.

I did meet up with that kind gentleman at the top, gave him his wife’s instructions but told him I was fine and to go ahead without me. There were at least a few dozen other people who would have helped me, had I needed it. But he did take my picture so I’d have proof of my success.

I didn’t stay long at the top because my “real quick” trip had taken at least 45-60 minutes and I knew John would be wondering if I’d gotten lost . . . or perished in the effort. As it turned out, the trip back down was a little more challenging than I’d anticipated, because it really was much steeper than it appeared to be, so I had to go slow enough to avoid falling over forward and rolling my way to the bottom.

I’m glad I made the trek. I did meet John partway down the path, and he’d come much further up than I anticipated he would. So far, in fact, I was afraid he’d want me to turn around and go to the top with him. Thankfully, he did not, because I’m fairly certain it would have killed me. But, when all was said and done, it made me feel strong and capable of pushing myself past my comfort zone.