On Labor Day, my mom took a spill and was hospitalized as a result. When we heard that nothing was broken we were all relieved and figured she’d be back at her assisted living apartment in no time. But, as the days progressed, it was clear this was not to be. When I realized it would be a longer hospital stay than originally anticipated, I made plans to fly out and be with her.

But, this blog post isn’t really about my mom—although she’s made a remarkable recovery and will be back home early this week. This post, however, is about an amazing woman I know.

I met Rachel through a writing group I work with for a ministry website. Rachel is new to the team and I’ve only met her once or twice. Because I had to bail out of a team meeting to go be with my mom, Rachel was made aware of my mom’s accident and my subsequent flight out of town.

I thought it was so sweet when Rachel, who hardly knows me, sent an email to ask how I was doing with everything. I sent back a quick email letting her know all that was going, and then every day, for the entire week I was there, I got an email of encouragement from Rachel. I was blown away.

Rachel reminded me of God’s love for me and that He loves my mom even more than I do. She reminded me to look for God’s blessings each day. She encouraged me to take short walks and just breathe.

It wasn’t as much about Rachel’s words as it was about her consistency in reaching out to me. To be honest, I believe God sent Rachel to encourage me as a way to remind me that he sees me, and knows what I’m going through.

The amazing thing to me is that most every time I’ve gone through a hard season, God has sent the most unlikely of people to bless me and support me. This isn’t to say my close friends weren’t supportive; it’s just the unexpected friendship that blew me away!

I hope that someday I can be the kind of friend to someone that Rachel was to me this past week. I would love to pass that blessing along. Is there someone God is nudging you to encourage today? As my pastor would say, “follow that prompt.”

The sunset picture at the top of this blog is one I took on my way home from the hospital one night just before the final rays of light flickered out for the day. I love the ocean and getting to sit and listen to the crashing waves as I viewed this beautiful sunset was a balm to my soul.

Nestled among the beautiful California Redwoods is a place called Mount Hermon Conference Center. When I heard about a Christian Writer’s Conference being held there I just knew I was supposed to go. It didn’t hurt that it’s located an hour up the road from where my parents live making it much easier to justify the cost of the plane ticket. It would be like two trips in one. Win – win. (Now, of course, I realize it was even more of a win as it was the last time I’d get to see my dad. God’s timing is amazing!) 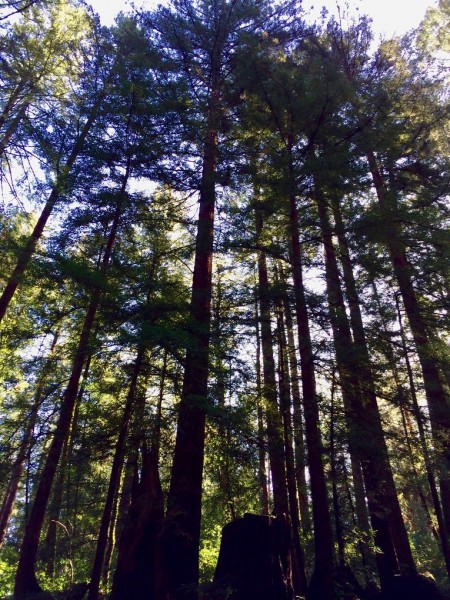 I knew I would learn a lot about writing and might even have an opportunity for some input on the book I’m working on. I had no idea however, how much more the Lord had in store for me.

As I drove into the grounds of the conference center, the beauty overwhelmed me. The mountain stream, flowering trees, perennials and annuals, only added to the allure of the giant trees. 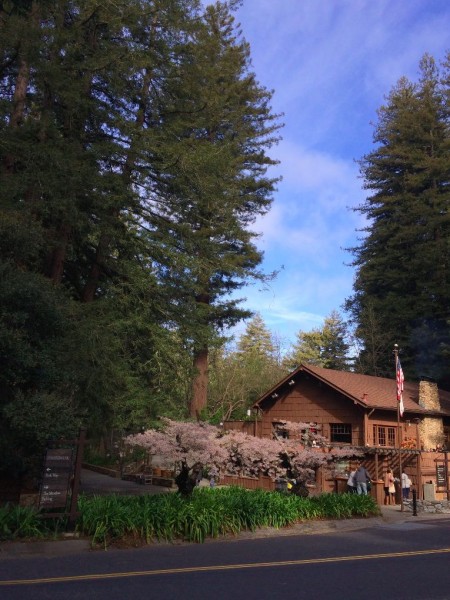 After getting settled I set out to acquaint myself with the grounds and the people at the conference. As the other attendees arrived I noticed this was no small group of writers and wanna-be writers. I looked around at the sea of people and thought, “Look at all of them. They are all writing a book in hopes of getting it published and eventually purchased and read. Basically,” I reasoned, “all of these people are my competition for a little corner of the reading market. And these people are just the tip of the ‘author iceberg.’” It was a discouraging thought. 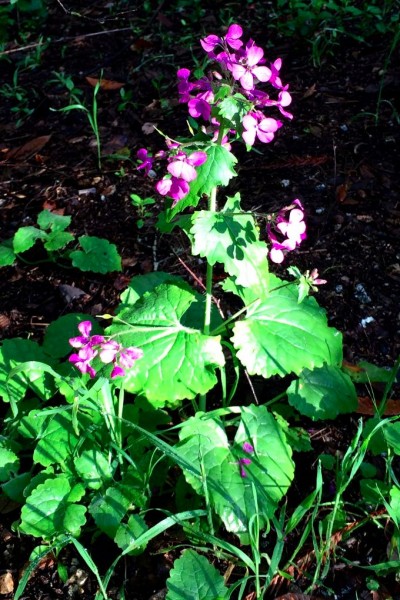 But throughout the conference I noticed something interesting. There wasn’t a sense of competition amongst the writers. There was a feeling of camaraderie and encouragement as we shared with each other about our books, or our appointments with editors and agents. We cheered over each other’s wins and gave hugs when discouragement started to rear its ugly head. It was as though we were in a no-compete zone. More important than our books, or our articles, was we were all doing our best to fulfill the call God has on our lives.

Wouldn’t it be amazing if all of life were like that? If we would always encourage each other to move forward in whatever God has called us to do instead of wondering how another’s success might affect us? I’m not suggesting we eliminate all competition. After all, how fun would it be to go to a football game where the guys were just patting each other on the back saying, “good job?” But, what if we could do a little more encouraging and a little less backstabbing?

Try it today. Find someone to encourage – even if they are doing the job you so desperately want. Give them a high five, or a “way to go,” and see if it doesn’t just brighten your day. I know it’ll brighten theirs.

In May I had the opportunity to help at a retreat for single moms. These moms come from every walk of life and are single for a wide variety of reasons. Some are rich, some are poor; some are divorced, or widowed, or never married at all. Some have white-collar jobs, some blue-collar jobs, and some have jobs that might raise your eyebrows. I don’t know about you but sometimes I’ve had a tendency to put single moms into a category of one-size-fits-all while at the same time throwing out just a little bit of judgment about their choices. I’m not proud of that; I’m just being real here.

But you know what? I was oh so wrong. These single moms are simply trying their very best to feed, clothe, and care for their children. Like any mom, they are worried about doing it wrong. They suffer from mom guilt, just like the rest of us, and many of them go hungry at night so their kids won’t. At the end of a hard day, when they might need a little break, or help getting the kids into bed, there is no other adult to help them.

One mom told me a small piece of her story. I’ll call her Patti (not to protect her so much, but more so because I can’t really remember her name.)

Patti has had seven children: FOUR of them have died; two died in an accident, one died from SIDS, and I believe the fourth one died from an illness of some sort. She has had to bury FOUR children. I can’t fathom! You would think she’d be walking around depressed, but she isn’t. I doubt it’s because she doesn’t mourn for her kids. I think she’s CHOOSING to stay positive because she still has three boys to raise; three boys who need a mom who isn’t sad all the time. Though I’m sure she has her sad moments, she just doesn’t allow herself to dwell on them.

Money is tight at Patti’s house – so tight, in fact, she almost didn’t come to the retreat. She didn’t have enough money to pay for the gas to get there. When she told one of her sons that she thought she’d just stay home for the weekend he wouldn’t hear of it. “Mom,” he said, “You’ve got to go! You have money – it’s in the piggy bank!”

Before I go on, let me tell you about her piggy bank. Two years ago Patti was gifted with (or won) a two-night stay for her family at a nice hotel in Duluth, MN. But to actually use the gift certificate she still needs to put together enough money to pay for the gas to get there and feed them all with once they arrive. So Patti started slowly saving a little money each month in a piggy bank. That money is not to be touched! But it’s the money her son suggested she use to take herself to the Single Moms Retreat.

Patti refused. “No,” she told her son, “that money is for our family vacation.” Then her sweet son said, “Well then mom, we’re just going to have to pray.” And pray they did. Sure enough, the money for gas came to her in another way.

Just like any other mom, married or single, I’m sure Patti has made some mistakes along the way and it’s the mistakes we moms tend to focus on. “I should have … read to them more, prayed with them more, been more strict, been more lenient, made them do more chores, not let them watch so much television, etc.” But this time Patti should be hollering out a loud “Woohoo!” because she has obviously done something very right. She has instilled great faith in her son. She has taught him to go to the Heavenly Father when he doesn’t know what to do. And his offer to push back the family vacation even longer tells me that Patti has exhibited selflessness in her life that her son wants to emulate. I hope Patti can see past all the “I should haves” and focus today on her “I got it right” moment.

Is there something you could do to encourage a single mom? I know lots of single moms who would love to hang out with a “traditional family” sometimes so their kids can see what a healthy marriage looks like. Or perhaps you could volunteer to take her kids for a bit so she could go to Target unhindered. Maybe you could even hand a single mom $20 so she can get take-out pizza some night when she’s too tired to cook after work. You could even just tell her how much you admire her for walking through a difficult season in life with such grace.

Whatever you do, please don’t judge her. There’s already plenty of that to go around.

“Do not let any unwholesome talk come out of your mouths, but only what is helpful for building others up according to their needs, that it may benefit those who listen.” 1 Thessalonians 5:11