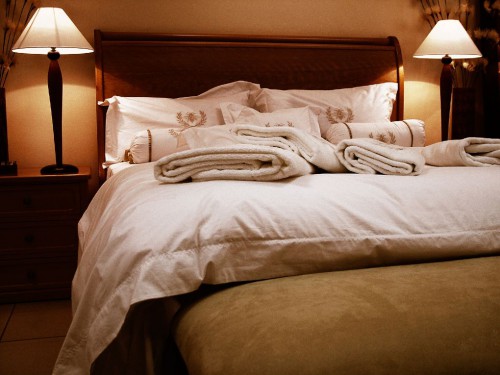 When my husband, John, and I were in California in May we took a couple of days to drive down the Pacific Coast Highway. We stayed in Cambria, CA at a motel with a view of the ocean. It was lovely – until I went to bed. You see, I have this thing with hotel sheets. I want them to stay on the bed so I don’t wake up sleeping on top of the bare mattress in the middle of the night. It grosses me out when that happens.

John was already snoring by the time I was finished getting ready for bed. Once I got all settled and ready to turn off the light I noticed that the sheet was already coming off the mattress. To the credit of said hotel, they were using fitted sheets which always seem to stay on a little bit better than the ones where they try to make a fitted sheet out of a flat sheet. But this one wasn’t staying.

After a few minutes of investigation I realized that the sheet on this king-sized bed was put on sideways. Now, I’ll grant you, it’s easy to do that, but still, it was annoying because at this point I had to wake up my husband, strip the bed, and turn the sheet around. And, I’m sure you can imagine how excited John was to get out of bed after he’d already fallen asleep. So, when we left in the morning I mentioned to the front desk clerk that the sheet had been put on sideways. It was my opinion that the housekeeping staff should know about their error so they’d be a little more careful in the future.

Once we got to the car John commented that I’d probably gotten someone into trouble. I responded with, “Well, they need to be more careful.” As you can see, I was oozing compassion, but in my defense, it was morning and I’ve never claimed to be a morning person.

The following night we were out to dinner with my family celebrating my dad’s 85th birthday and I decided to take a poll. I explained the situation we’d encountered and asked who would have said something. My entire family, my mom, my dad, and both of my brothers all thought that reporting the incident was a good idea. (Clearly tattling is hereditary.) My sisters-in-law and, as I’ve mentioned, my husband, all said they wouldn’t have bothered to say anything. One even said, “If that’s the worst thing that happens to you in day, you really have no reason to complain.” Well, there’s that.

On our flight home I was seated next to a man who works in hotel management so I asked him his opinion on the situation sure that he’d say, “Yes, you should tell them about it because it’ll help improve their service.” But . . . he didn’t. Oh no. Instead He said, “Well, usually I try to find something they did right and compliment them on that.” Clearly, the man is some sort of hotel saint. And now I feel like scum.

Nonetheless, I was still on a quest to prove that I was somehow right in my complaining. “He’s just one person,” I reasoned, “I’ll do a poll of my Facebook friends.” Imagine my surprise when more than 75% of them reported that no, they wouldn’t have said anything. Some even went so far as to tell me about their days as hotel housekeepers and how stressful it can be and how many rooms they have to clean in a short period of time. Hmmm . . . maybe I should have just been grateful for the fitted sheet that stayed in place after I remade the bed.

So, in June when we were in Idaho for a wedding, and I had to once again turn the fitted sheet on our king-sized bed, I left a note (and a tip) for the housekeeper: “Thanks so much for cleaning our room. Our bathtub sparkled! No need to change the sheets today.” I like to think I brightened her day.

And, in my effort not to be annoyed in the future, I think I’ll work on designing a line of hotel sheets that are so clearly marked they can’t possibly be put on sideways. That’s me, saving hotels from annoyed customers . . . one sheet at a time.